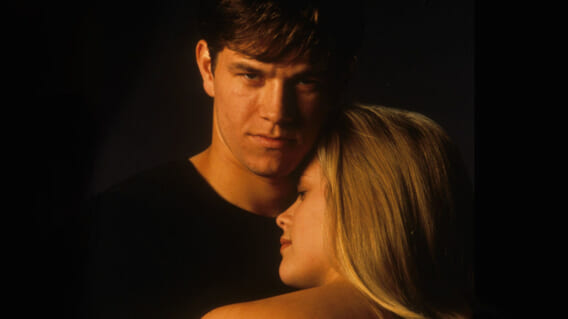 The 1996 thriller Fear is many things. It is sexy, suspenseful, and brimming with camp appeal. It’s also responsible for teaching an entire generation of ‘90s teens that if a man doesn’t carve your name into his chest, he doesn’t really love you. In all seriousness, Fear is a moderately effective chiller that is equal parts frightening and ridiculous. And that combination proves to be a winning one.

Fear is a bit like Fatal Attraction made for a teen audience with the unhinged character being gender swapped from previous efforts of this ilk. The plot crunch goes something like this: High school student Nicole (Reese Witherspoon) finds herself growing bored with boys her own age, which leads her to take an interest in the sexy but troubled David (Mark Wahlberg). Nicole feels drawn to David but eventually realizes he is dangerous and volatile, with a violent streak. Could this be love or something far more dangerous?

While it may not be the first film of its kind or even the second or third, it’s hard not to love the way Fear captures the essence of ‘90s teen culture. From the music to the flannel shirts to the fact that it’s set in Seattle during the grunge era; everything about this flick makes me nostalgic for my youth. While some might call the film dated, I would counter by saying that teen movies are supposed to reflect teenage life. And it does fairly accurately represent the styles and trends and music of the era in which it was produced.

Speaking of music, the flick serves up a great sampling of the alternative sounds of the ‘90s. Some of the song choices really enhance (and in some cases even define) the sequences they accompany. And that’s never more apparent than in the rollercoaster scene. I will never be able to hear The Sundays’ cover of ‘Wild Horses’ without thinking of the infamous rollercoaster scene. Say what you will about that sequence. And I will agree that it is a little over the top. But one cannot deny that it makes an impression. And scenes like that are a big part of what makes the flick such campy fun.

Fear is just the right amount of campy. It goes off the rails at times but never completely self-destructs. And as such, it is entertaining in the conventional sense. But it also delivers a level of camp that makes it fun to good-naturedly heckle. And I think that works surprisingly well because a viewer can enjoy Fear in a straightforward sense but also find levity in the more ridiculous moments.

The flick somehow manages to be chilling and hilarious at the same time. On one hand, it’s frightening and intense when David carves ‘Nicole 4 Eva’ into his chest or starts hitting himself repeatedly. But on the other, it’s hard not to chuckle at how over-the-top Wahlberg’s performance is and how outlandish David’s behavior can be during some of the film’s more intense moments.

The final (and most important) piece of the puzzle is the film’s casting choices. Reese Witherspoon was a great pick to play boundary-pushing, rollercoaster enthusiast Nicole. She is likable and believable enough in the role. And her doe-eyed innocence works in perfect contrast to Mark Wahlberg’s sinister turn as David. Alyssa Milano is also pretty brilliant as Margo, the friend with loose morals that encourages Nicole to make questionable choices. Milano seems like she’s having fun playing the bad girl and she sells the performance effortlessly.

All in all, Fear is a campy good time that serves up some memorable and chilling sequences with just the right amount of camp.