Drew Tinnin looks back at 'Grindhouse' for its 15th anniversary. 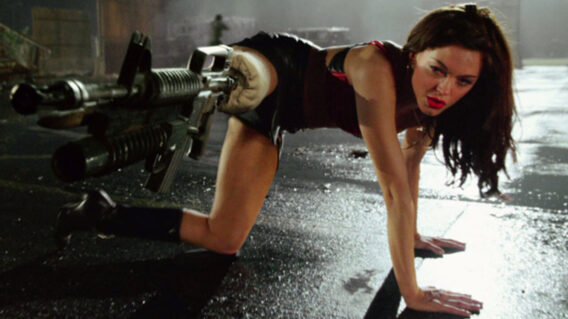 When Grindhouse hit theaters on April 6, 2007, Quentin Tarantino and Robert Rodriguez were already cultural icons. Both directors had just come off of two huge hits with Kill Bill and Sin City. For their follow-up, they literally doubled down on their Hollywood clout to make a double feature that would recreate the experience of spending an entire night at the drive-in. Rodriguez was up first with his star-studded action-horror hybrid, Planet Terror, followed by Tarantino’s killer car slasher, Death Proof.

Fake trailers from Edgar Wright, Rob Zombie, Eli Roth, and Jason Eisener split up the two films, along with ’70s wraparound intros that served as a time warp to the heydey of 42nd street. Audiences, however, didn’t respond and Grindhouse wound up severely underperforming at the box office. Both directors misjudged the marketplace. But in doing so, they wound up creating a new industry of cool that took the exploitation films of the seventies and repackaged them for the 21st century.

I was at the Austin, Texas premiere of Grindhouse on March 28th, 2007. I watched along with both directors and the entire cast, including Mary Elizabeth Winstead, Danny Trejo and Kurt Russell. The sold-out audience that night was completely enraptured, especially an entire section of the bad ass roller derby league, the Texas Rollergirls, who all screamed everytime one of their own appeared on screen. The vast majority of filming for Planet Terror and Death Proof took place in Austin. So every hometown shout out and local landmark was met with cheers.

That was probably the audience reaction that Robert Rodriguez had in mind when he suggested the entire concept to Tarantino, who immediately signed on. We were the horror geeks that Grindhouse was made for, not mainstream moviegoers who had never seen a Roger Corman movie before. There was also a re-education going on, allowing Tarantino and Rodriguez to introduce genre fans to forgotten exploitation films and the drive-in icons that used to light up the theater marquee.

Turning so many new fans onto the biker movies and horror schlock of the seventies led to more repertory theaters screening and preserving films from the drive-in era. Grindhouse was released in 2,600 theaters and only made half its budget back. But it gave a much needed jolt to independent movie theaters and launched a massive straight-to-DVD empire.

The ripple effect of Grindhouse‘s unintended success can still be felt today, especially in countless throwback horror trailers that mimic the gritty film stock style that Tarantino and Rodriguez paid homage to. The “Quentin Tarantino Presents” banner was also created to promote neo-biker grindhouse films like 2008’s Hell Ride starring starring Larry Bishop, Michael Madsen, Dennis Hopper, and David Carradine. Drive-in films were back, even if mainstream audiences didn’t buy into the experience that both Tarantino and Rodriguez tried to recreate.

Miraculously, even two of the fake trailers in Grindhouse actually became real films. Hobo With a Shotgun from Jason Eisener is now a Canuxploitation classic. Rodriguez eventually made Machete and Machete Kills with Danny Trejo. To date, there have probably been more films made copying the Grindhouse aesthetic than all the rip-off versions of Pulp Fiction dolled out in the late nineties and aughts.

Maybe if we’re lucky, Edgar Wright might get around to making his fake trailer Don’t into a reality. Judging by Wright’s tweet on the Grindhouse 15th anniversary, there may be a glimmer of hope.

Or, Tarantino could write the book that Don’t is fictitiously based on, turning it into an actual bestseller.