Say all you want about 'Friday the 13th Part V,' but there's no denying that its Final Girl Pam Roberts is an all-timer. 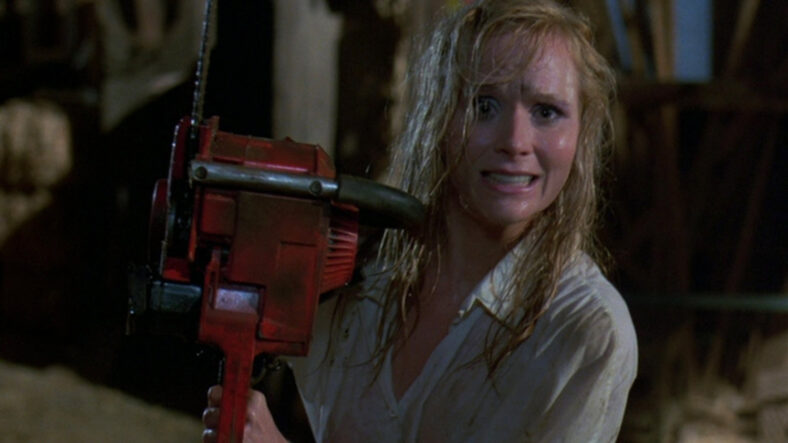 Women kick all kinds of ass. Without them, the genre of horror would not be a smidgen of what it is, today. March is Women’s History Month, and for the next five weeks, I will be focusing on the final girls from the fifth entry of five different franchises. This was sparked by the spectacular final girls from the fifth entry of Scream (2022), Sam (Melissa Barrera) and Tara (Jenna Ortega) Carpenter. These two powerful individuals proved that even though the franchise maybe five entries deep, that doesn’t mean that the women within the film lose any power.

For week one, the focus will be on a final girl who, I believe, rarely gets her due. She cared, she drove a pickup truck, she fought a maniac, and she rocked a pink over-the-shoulder sweater while doing most of that. She is Pam Roberts (Melanie Kinnaman) from 1985’s Friday the 13th Part V: A New Beginning. Maybe you’re groaning at the mention of this much-maligned sequel from the beloved franchise. Sure, Jason wasn’t actually Jason, Tommy Jarvis had barely any do, and it’s literally scene after scene of sleaze. Honestly, that latter reason is actually enough to enjoy the film.

Pam actually gives the film a sense of grounding amidst all of the sleaze. In a world that seems to have been created by John Waters, Pam is the caretaker of those Waters’ creations. She’s the assistant director at a youth detention center, one of two adults that take care of nine teenagers who need a positive figure in their life. You get a sense that these kids respect Pam. We see Pam casually cheering on their innocent shenanigans, and putting down her foot when it comes to the not-so-innocent shenanigans.

The previous four films’ final girl was always a part of a group of teenagers / young adults partaking in sex, booze, and drugs. Pam was sort of the antithesis of the previous final girls in that she was older, and appears as a mother figure. Wait, light bulb. Could that be why the character’s name is Pam? As a nod to Jason’s mother, Pamela Voorhees? Since Jason is absent from the film (the kills are being done by a copycat), this creates another antithesis for Pam’s character. Whereas Pamela Voorhees was the psychotic, sweater-wearing killer, this Pam is a nurturing mother figure who also adorns a sweater.

From this point of view is where Pam gets really interesting. Sure, it’s digging deep to view it this way. The writers of the film may not have been intentional about this, but it works. Pamela Voorhees was the villain in the first Friday the 13th. She sought revenge on the death of her son, Jason. Here, in part 5, we are far removed from that stance. So much so that Jason isn’t even Jason; therefore, the motherly figure of this entry isn’t Pamela Voorhees. It is Pam Roberts. A slight reiteration of the motherly revenge in that she’s on the side of good. She’s protecting youth that isn’t blood-related. She shows love, affection, and protection for them in a way that Pamela Voorhees wishes she could have done for her son.

Even without that point of view, Pam’s power is definitely that of an advocate for the youth under her care. The strongest relationships that we see her have are with Reggie (Shavar Ross) and returning character and new to the home, Tommy Jarvis (John Shepherd). Heck, for the first half of the film, Pam is in the background. It’s not even made obvious that she could possibly be our final girl until a little after halfway through the film when Reggie, Tommy, and she go off on their own. Pam takes Reggie to see his brother, who’s in town. She asks Tommy to go along to get him out of the house, and to have a little fun. This is where the already amped up film amps up a bit more as Roy, as Jason, plows through the rest of the teens.

Throughout the standard Friday the 13th third act in which the final girl fights for her life, Pam shows the motherly instincts that were shown throughout the previous acts of the film is exactly who she is. She does everything within her power to protect Reggie and provide Tommy with the power to overcome his past. My favorite bit? She straight-up pulls out a chainsaw to go toe to toe with Roy.

Let’s talk about Chainsaw Pam for a minute. It’s easily her most kick-ass scene in the entire film. The tables had turned on Roy. For a moment, he’s the one not knowing where Pam or Reggie was. Pam knows exactly where he is as well as that he will find her. When he does, she charges, chainsaw revving. That final girl spirit swirled all over Pam as she chainsaw battled against Roy’s machete. She’s not to be messed with, shown by the determination on her face. She gets a good slice into Roy’s arm before the chainsaw sputters out. After a split second of fear, that final girl spirit reemerges. Chainsaw doesn’t work? No problem. She chunks the machine right at Roy. Go, final girl, go!

Pam doesn’t serve Roy his final blow. Reggie and Tommy come in for the assist. Pam puts Roy in the right spot for them to send Roy over the edge and onto the farm spikes, below.

Melanie Kinnaman was set to follow in the footsteps of Alice, Ginny, Chris, and Trish. I believe that she started on the same path as the four previous Friday the 13th final girls. Whereas the previous four were all teenagers or in their early twenties, Pam was older. She had a different sense of wisdom and life. Kinnaman portrayed that with the perfect balance of motherly affection and badassery.

Also Read: ‘The Curse of Michael Myers’, ‘Jason Lives’, and The Art of Reinvigorating An Iconic Slasher

She advocated for believing in a person. That’s where her biggest strength is. I believe it’s also the biggest overlook when it comes to her character. Within Pam, we had a protector. Someone who actually attempts to understand the struggles found within youth instead of overlooking them. We didn’t get enough time with her and the other characters, but there’s a sense amongst their undershown relationships that she cares. She does exactly what needs to be done to respect, understand, and protect those within her care.

That is exactly why Pam is the first of the final girls of the fifth entry of a franchise that kicks ass. I implore ye that ye view Friday the 13th Part V: A New Beginning with a new lense on Pam. She had the love, the drive, and the guts to protect those under her care that she could have easily ignored in order to protect herself. She pulled out a freaking chainsaw, and battled Faux Jason. Pam is a legit final girl.