‘I Saw the Devil’ Serves Up Bone-Chilling Winter Terror 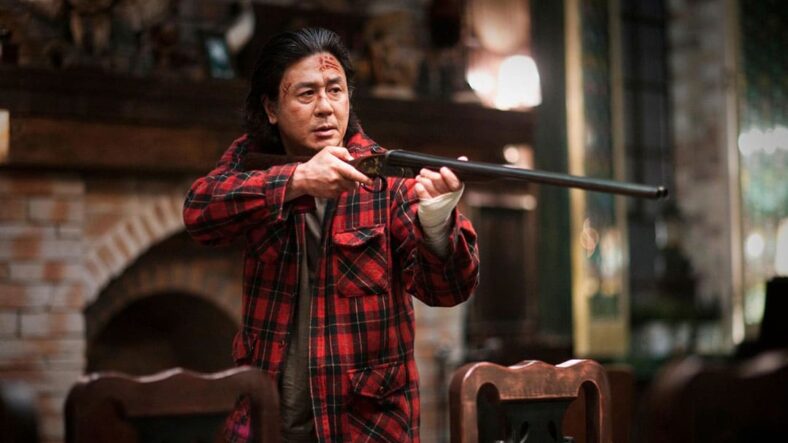 I Saw the Devil is a penetrating knife wound to the gut, one the film treats, violently rips open, and then cauterizes again. It’s the crest of an icy winter morning. It creeps and looms just over the distant horizon before rolling in with gray clouds and thunderous, chilled air, the kind the saps vitality from anyone it touches. Kim Jee-woon’s revenge saga straddles genres like the best Korean outputs (Parasite, anyone?). It shifts seamlessly from black comedy to the most gruesome serial killer slice-of-life this side of Henry: Portrait of a Serial Killer. It’s raw, effortlessly bleak, and thrillingly misanthropic. It isn’t to be missed.

On a snowy evening, Jang Joo-yun (Oh San-ha ) is stranded on the side of the road with a flat tire, framed in cold canvas by Jang Kyung-chul’s (Choi Min-sik) distant headlights. Kyung-chul, an academy bus driver, stops and offers to help. The tension is palpable and gruesomely shattered when he beats Joo-yun unconscious, drags her home, and dismembers her body. I Saw the Devil only gets more troubling from there.

Joo-yun’s fiance is Kim Soo-hyun (Lee Byung-hun), an agent in the National Intelligence Service. He’s quick to take revenge, conducting a search through alleys and decrepit bars, torturing subjects and assembling clues. He’s quick to deduce Kyung-chul’s identity. But rather than simply kill him or report him to the requisite authorities, he beats him senseless and shoves a GPS tracker down his throat. From there, Kyung-chul’s continues his savagery, murdering and sexually assaulting several more people, with Soo-hyun in close proximity, stepping in to beat Kyung-chul once again. It’s an ostensible fate worse than death– no matter where Kyung-chul goes, Soo-hyun will be there.

The revenge is perfectly calibrated, a tapestry of moral ambiguity and distinctly masculine rage. Women in I Saw the Devil are peripheral players, girlfriends, fiancés, and victims. They endure the reverberations of male violence, the ebbs and flows of catch-and-release. To facilitate Kyung-chul’s torture, those in his periphery prove extendable, including Squad Chief Jang (Jeon Gook-hwan), Joo-yun’s father.

So Why Check It Out?

It should be unwatchable. Like other procedural revenge thrillers (see: The Treatment), I Saw the Devil should repulse. It’s giddily grisly, replete with ugly bit players, many of whom are arguably worse than Kyung-chul, and painfully dour. Yet, for all its empty victories, I Saw the Devil is beautifully structured, gorgeously filmed, and painstakingly assembled. Every moment of its two-hour-plus runtime is there for a reason. It bucks conventional filmic juxtaposition, rarely– if ever–offering reprieve from the violence on-screen. Yet it works in spite of it, arguably emerging as one of this century’s best horror movies (both Rolling Stone and Paste have listed it as one of the best).

It’s a rush of adrenaline, one that paralyzes and grips its audience until there’s nothing left but the shell of a once whole person. It begs the audience to look away, whether during a foray into a cannibal’s den or a mid-movie taxi ride with not just one, but several serial killers, none of whom immediately recognize what the others are. It’s an assemblage of human savagery, each person vying to be just a little bit worse than the next.

Principally, however, I Saw the Devil is a worthwhile case study in the ongoing debate of depiction and endorsement. When discussing what does and does not need to be shown on-screen, I Saw the Devil is, in a purely empirical sense, graphic. Stripped away from craft and structure, its distinct narrative elements feel designed exclusively to push buttons. In fairness, it might theoretically, and accurately, be descriptively reduced to just two hours of torture. And it is, yes. I Saw the Devil is violence in competition with itself, director Kim Jee-woon and writer Park Hoon-jung pushing the censors as far as they’ll bend, tempting ratings board and audiences alike with artfully crafted Grand Guignol savagery, the kind American censors would likely never permit.

Yet, I Saw the Devil is a classic. Not simply a cult classic, but one largely agreed to be a damn near masterpiece. It’s curious, then, to try to identify why something like it works, why a movie whose set pieces almost uniquely involve distressing violence toward women– muffled screams and broken bodies– is discussed no differently than a high-octane tentpole. I don’t have the answer to that, even if I know in my gut that something about it is different. What Kim Jee-woon accomplishes here isn’t simply exploitation, violence for violence’s sake. The savagery is the point. At the tail end of I Saw the Devil, in a scene that lingers even twelve years after release, that point becomes art.