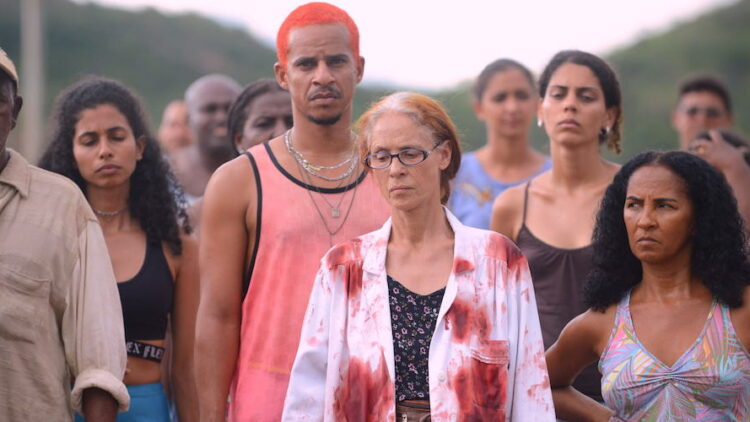 Each country comes with a complex history. Primarily in Latin America, it’s stories of being invaded, beaten and colonized. Within these incidents, there are tales of people fighting back and standing firm for independence. Philosopher George Santayana once said, “Those who cannot remember the past are condemned to repeat it.” This sentiment is the root idea behind director Kleber Mendonça Filho and Juliano Dornelles’ Bacurau.

The film follows a small fictitious community named Bacurau in rural Brazil in the undisclosed future. After the death of the town’s matriarch, small off-putting incidents begin to transpire. The first: Bacurau is wiped off all electronic maps. Then the internet begins to falter even though reception has never been a problem before. This is all caused by a group of mercenaries mostly composed of European and American foreigners led by Michael (Udo Kier) with one goal in mind: to kill and erase. It’s up to the small town to band together and fight back against a squad of oppressors once again. Bacurau doesn’t follow one specific character as the entire town is the main focus. According to the directors in an interview provided by the Criterion Channel, Bacurau is a micro-representation of Brazil. Hence the sole focus is the community as a whole.

The residents of Bacurau are a sea of diverse faces. Just like the collection of varied bodies, the film is a cauldron filled with subgenres. The meat of the narrative is a Brazilian take on classic Hollywood Westerns as this small town is invaded by a group of foreigners. The use of a Panavision anamorphic lens adds a sense of American adventure. But the horror comes into play once the strangers attack in the last hour of the film. In a way, it replicates a home invasion film on a grander scale. We get instances of the villains intimidating the inhabitants followed by the confrontation filled with bloodshed. The sci-fi elements appear in minimal instances such as futuristic drones disguised as UFOs from classic Hollywood films. These drones infiltrate and spy on the rural town.

Although not an explicit focus, the sci-fi elements are connected to one of the sub-themes within the film: the modern world versus traditional living. This begins with the modernization of the mayor Tony Jr. who has a bad rep with every Bacurau resident. His artificial attempts at reconnecting with the town are seen as disingenuous as he drops off supplies as peace offerings. The first is a literal truckload of old used books, most of which are unreadable due to their horrid conditions. The second is a Trojan Horse of sorts as he drops off a box filled with unlabelled, free and prescriptionless medicine called Brasol 4, which is known in this world for being addictive. All Tony expects in return is a vote to stay elected as mayor.

Each scene involving the mayor depicts how modern technology has made him ungenuine. He arrives at the rural town in flashy vehicles with huge screens akin to the billboards from Las Vegas. His presence is loud and obnoxious compared to the silence or low noise levels in Bacurau. Suffice to say, the inhabitants of Bacurau are displeased with his tactics and overall terrible behavior. It’s important to note that the townspeople don’t reject technology as a whole. They’re still seen attached to their phones and share a community big-screen television on wheels. The residents are still connected to the world around them; they just choose to not become engulfed by it like Tony.

Regardless of all this sci-fi tech on screen, the film takes place just a few years in the future. There is no set time because according to the directors the future is now. The technology being used is shown for primarily two points. The first is modernization making its way into rural Brazil which is described above. The second point is how technology is used to depict worldwide violence. While the film is not as overt as The Purge franchise about its politics, Bacurau doesn’t tiptoe around it.

Also Read: The Cycle of Misogynistic Aggression in ‘Tombs of the Blind Dead’

The extremities of death and violence within the film mimic what once occurred during Brazil’s history. Brazil fought for its independence from Portugal in the 1820s. Even now they have “public executions” being shared through the internet. The term public executions may seem like an out-of-date action or an extreme way to put it. But in a sense, they are currently happening in Brazil, and around the world. This action is just put in a different light.

During the climax of the film, one of the killers is inside an empty home in Bacurau. On a small television screen, it’s announced that the public executions will be held live at 2 PM. Although the world hasn’t entered Bacurau’s level of dystopian violence, violent deaths can be shared with a click of a button. A lot of these video clips don’t show the whole story, just the violence. These can be easily shared through our phones.

Another account of violence imitating real life is also during the climax. Before the ongoing attack against Bacurau, the bloodthirsty soldiers scout the perimeters of the town. Josh (Brain Townes), who Michael refers to as The Bad Cop, kills a young boy late at night. Back at the compound, Josh tries to justify his kill by saying he mistook the boy’s flashlight for a gun. Keep in mind, there was no sense of danger or suspicion of threat coming from the boy; he was just playing with the rest of the kids. Yet regardless of all the concrete evidence of the boy being harmless, Josh sticks to his story. There are too many accounts in America of similar stories where a young boy is mistakenly killed due to his appearance.

Although the graphic violence on screen feels extremely Grindhouse-esque, there’s a sense of heaviness surrounding it. This could be as the violence seeps from the theme of history recycling itself. Having foreigners come into an indigenous-owned place to enact their savage tendencies is a tale told countless times in countless countries. In an interview with Build by Yahoo the directing duo stated the War of Canudos, an unspoken genocide in Brazil, is something they had in mind while shooting and writing this film. This war, which was prolonged over three different battles, turned into a massacre of over 15,000 people set in place by the State of Brazil towards the small rural town of Canudos.

The historical museum in Bacurau is a perfect metaphor for the meeting point for the two themes presented here. In turn, part of the climax is resolved within the museum’s walls. As one of the mercenaries meets their bloody end in this historical building, this is seen as the clash of the modern world and its attempt at erasing an Indigenous community that stands on its own.

Within the narrative of Bacurau, there are only glimpses of the cinematic history told through quick flashes of newspaper articles in the museum. One of the headlines read “Rebellion quashed in Bacurau”. Some of the printed frames surrounding it are of older residents, most likely during Colonial Brazil, standing in front of a line of severed heads. The same image is recreated once victorious against the new threat of fascism and oppression. Bacurau is a town that has seen blood before and most likely will have to see it again after winning against Michael and his deadly team.

The genesis of the script dates back to 2009 with the final version completed during Trump’s presidential era. The directing duo chose to place the film “a few years into the future” for their fictitious town and story. Yet, once the film was complete, some of the elements ran parallel with real life. The rise of facism not only emerged in the United States but a year after the premiere in Cannes, Brazil was put under power by President Jair Bolsonaro, another far-right politician with concerning ideals. All the factors in place seem to point that history might be in the process of already repeating itself unless we band together to fight off oppression and break the bloody cycle.