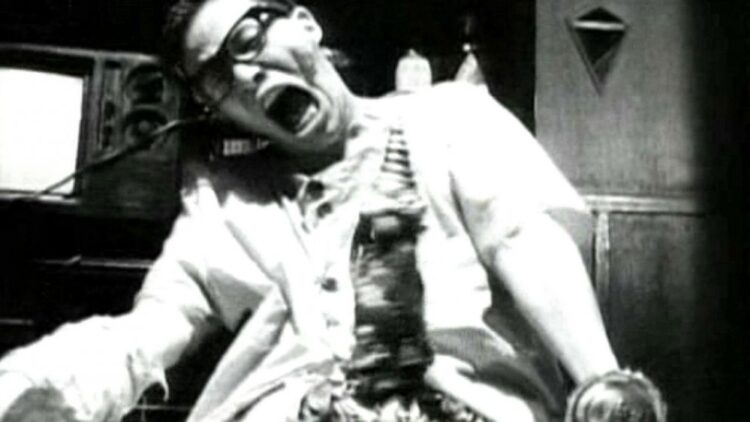 Just as important as discussing the overtly queer narrative of modern extreme horror is diving into the past and reading the subtext in older films. With a film like Tetsuo: The Iron Man, it is not incredibly subtle but serves as a fascinating study of eroticism and queer awakening in the context of extreme horror. Shinya Tsukamoto’s film serves as an incredible landmark in queer horror cinema. It provides both beauty and horror in the face of bodily transformation and sexual awakening. This is a film that I’ve loved for an extremely long time, and I’m very excited to dive into it.

Before we dive into the film, let’s go over some basics. Tetsuo: The Iron Man was released in 1989. It’s directed by Shinya Tsukamoto and stars Tomorowo Taguchi as the Salaryman, Kei Fujiwara as Girlfriend, and the director himself as the Metal Fetishist. The film was Tsukamoto’s first foray into 16mm. However, it shares many stylistic similarities with his previous 8mm short, The Adventure of Denchu Kozo. These films share a hyperkinetic editing style that also uses stop-motion to simulate moving at excessive speed or transformations. This all ties together to make for a distinctly surreal and animated feeling throughout the film. With that out of the way, let’s dig into this one.

Tetsuo: The Iron Man spends a lot of time examining the desiring and rejecting of certain bodies. In the opening, the Metal Fetishist admires many photos of Olympic athletes while he cuts his leg open and inserts a metal rod. The Metal Fetishist desires the body of the athletes and inserts the rod in an image that’s masturbatory in nature. Before he inserts the metal, he takes the time to run it between his teeth as the camera watches in an extreme closeup. The sequence is a masturbation ritual, as the Metal Fetishist keeps his gaze on the object of his desire while indulging his fetish. Soon after, he discovers maggots in the wound, signifying shame after he commits the act. He leaps to his feet and runs into the street only to be struck by a car.

This is followed by the title sequence where we finally see the Salaryman. Unbeknownst to the first-time viewer, the Salaryman was behind the wheel of the car that hit the Metal Fetishist. This is the beginning of his transformation. In Tetsuo: The Iron Man’s title sequence we see the Salaryman surrounded by an industrial landscape as the score kicks into overdrive. He is drenched in sweat and dancing erratically. It’s the first time we see him, and we are privy to an internal image of the stirring of his desire, solely subconscious at this point. It can be jarring to move from the seductive tones of the previous sequence to the hammering drums of this one. But it helps to ease the perspective shift between the two characters.

From here we see the Salaryman shaving in the mirror. He is very careful and methodical in his movements until he finds something odd: a metal zit. He pops it to his disgust, before covering it with a band-aid and moving about his day. This is a reference to puberty and shame, which seem to go hand in hand sometimes. Puberty here is illustrated by the acne on his face and his changing identity from a straight man to a queer one. It is a new sexual awakening and with it comes new growing pains. At this point, he still doesn’t fully understand what is happening. So, he covers up the unsightly blemish to face the day as he would any before.

However, on his way to work, he sits next to a woman who ends up being possessed (in a manner of speaking) by the Metal Fetishist. She touches a metal/organic growth on the ground and sprouts attachments to her hand. She also begins to speak in the voice of the Metal Fetishist. The female with the voice of a male is the conflict of desires inside the Salaryman. He’s beginning to notice that something is different but refuses to confront it. The woman chases him and eventually, he has to kill her to escape, destroying the potential source of desire out of resistance against his burgeoning sexuality.

This is quickly followed by a dream where the Girlfriend dances around a nude Salaryman, but she has a long prehensile metal phallus emerging from her groin. The Salaryman appears concerned but stays prostrate on all fours in a show of submission. She penetrates him, and he wakes from the dream.

Tetsuo: The Iron Man cuts to the Salaryman and Girlfriend having sex, with the Salaryman attempting to keep it so that she isn’t facing him. He is doing this to fulfill his subconscious fantasy of queer sex, which he can imagine when he doesn’t look at the front of Girlfriend. I’ve wondered for a while if the Salaryman was either gay or bisexual. But I think that he falls somewhere in between the two. This could also be viewer-dependent since as a bi man I tend to lean towards that interpretation. Afterward, he cooks her food and feeds her. Every suggestive bite she takes is accompanied by metallic sounds screeching over the soundtrack, implying that he is focusing on the sensuality of the mouth but thinking of the Metal Fetishist in this sequence.

Throughout the previous scenes of Tetsuo: The Iron Man, the Salaryman has been finding new metal attachments on his body. But then, his first major change occurs. After all of these sequences of desire for a male partner layered over a female form, his chest buckles and his back expands. It is then revealed that his penis has transformed into a massive rotating drill. The Salaryman can no longer keep his desires in check and begins to chase the Girlfriend around the apartment. However, even though he is making advances on her, his body has morphed into something that seems to be more akin to the desires of the Metal Fetishist. This makes them incompatible as lovers, and the Girlfriend stabs him in the neck, seemingly killing him.

When the Salaryman comes to, he finds that the Girlfriend has attempted to have sex with him despite his new appendage. However, due to the fact that it is no longer biologically compatible it has killed her in the process. Blood gushes against the white curtain behind her. The Salaryman is obviously shocked, screaming and attempting to nurse her back to health with some sort of odd feeding tube from his mouth. He then receives a menacing phone call from the newly resurrected Metal Fetishist.

Also Read: Queer Tragedy in THE HAUNTING OF BLY MANOR

So we reach the final confrontation of Tetsuo: The Iron Man, which plays out on a grander and more metaphysical scale than the previous segments. The Salaryman has completely transformed into a mass of twitching metal while the Metal Fetishist has lost most of his power. The Salaryman begins to suck in all nearby metal, including the Fetishist. The Fetishist warns that the Salaryman, too, will rust if he takes him in. This can either be seen as a reference to an STD or the shame that was experienced with the infected wound in the opening, based on the traumatic memory he experienced. The Fetishist resists but eventually succumbs to the Salaryman’s embrace, at which point something strange happens.

We see them both floating in a womb-like cocoon surrounded by metal. The saxophone song from earlier plays for the last time as the camera moves woozily around the two. They begin to explore each other. In this segment, both the Metal Fetishist and the Salaryman are seemingly returned to normal, minus the fact that two of their arms are connected like an umbilical cord. The two have finally seen eye to eye, without the excess around them. They’ve come to understand and accept one another. Only because they have reached this level of intimacy can they truly become one.

And in this case, one is a giant two-person tank. It’s revealed that they have turned into a mass of metal and flesh that moves on treads. They prepare to go out into the world, showing a full display of their love for all to see. They promise to change the world to metal. At this point, the Metal Fetishist utters one of the film’s most famous lines:

“Our love can destroy this whole fucking world”

The engine on the tank revs up. They take to the streets, putting on display their connection and love for all to witness. The last line has a good amount of ambiguity to it. I interpret it to mean that by putting their connection on display for the public, it can in effect change the entire world. In this case, that means that it would threaten the standards of a heteronormative society. Their bold display could potentially cause others to join in and break free from repressive mindsets. This is cohesive with the previous symbolism and thematic content, and wraps the entirty of Tetsuo: The Iron Man up nicely.

A Note on Interpretation, and Conclusions

Something that I find fascinating about Tetsuo: The Iron Man is that it remains fairly open to interpretation today. A lot of that comes from the viewer as they apply their own understanding and experience to the action on screen. I’ve discussed this movie a lot over the years. While some segments have fairly universal understandings, others allow the viewer to step in and add their own thoughts. The film is almost conversational in this way, and it can make for an incredibly empowering experience.

Over the course of this column, I’ll alternate between writing on overtly queer extreme films and doing queer interpretations of classic extreme texts. I appreciate everyone for giving New Queer Extremity a chance, and if you’d like please feel free to bring up your own interpretation of Tetsuo! In the meantime, I’ll see everyone next month and I hope everyone enjoys the end of their year.