‘Krampus’: Pair The Devilish Holiday Favorite With These 4 Films [Double That Feature] 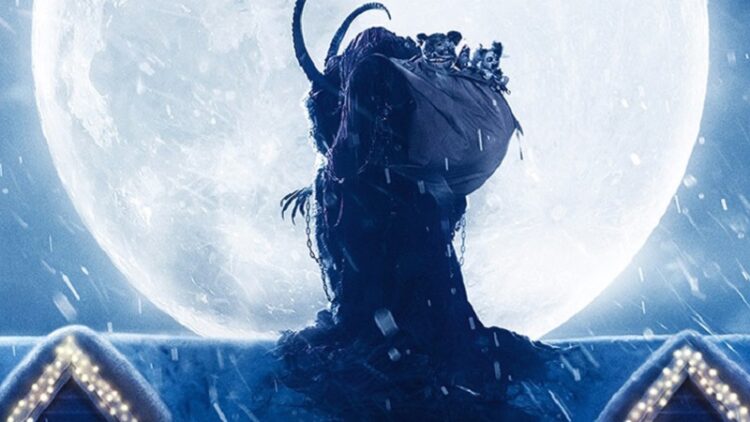 Merry Christmas and Happy Holidays, Gorehounds and Blood Babes! Deck someone’s halls, throw lights on a tree, give gifts to loved ones (doesn’t have to be your own)! You know, all that pagan stuff the holiday is known for! Or, if you’re more low maintenance like me, go heat up some hot chocolate, snuggle in a warm blanket, and tune your TV to some cheery Yuletide terror. Luckily, thanks to the miracle-workers at Scream Factory, we now have the restored uncut version of the best modern Christmas-horror flick: Michael Dougherty’s Krampus!

Okay, maybe “best” is a bit of a stretch for some. But seeing how I already covered its sister movie, it only seems right to jingle this one’s bells, too… wait, that didn’t sound right. Maybe I should cut tha-

Before we reach into this article’s stocking, it’d probably help if I gave some context of what Krampus is all about. Usually how I operate, don’t see why I should change now. Lemme think for a sec…

It’s about Krampus, a monster with origins tied to Christmas, attacking a family who’s forgotten how to celebrate the holiday with one another. He ushers in a wave of merry mayhem from killer gingerbread men (no, not that one) to a Jack-in-the-Box with a voracious appetite.

You can pick up the naughty cut of Krampus here.

Now to the main course of this festive film feast: my suggestions to pair with the roast beast that is Krampus! Holiday horror all around! Let’s put out the milk and cookies, hang up the mistletoe, and hope that scratching outside is just Santa’s reindeer.

“A young man inadvertently breaks three important rules concerning his new pet and unleashes a horde of malevolently mischievous monsters on a small town.” – via IMDB.

Definitely the heavy hitter of this jolly crew, I‘m not going to lie. Which makes it difficult for me because what else can I say about it? It’s Gremlins… kind of a universally beloved film, in case you didn’t know.

It’s a Christmas classic, right up there with It’s a Wonderful Life and Santa’s Slay. I mean, look at it; it has holiday imagery, music, atmosphere, the whole sha-bang. At the very least, it’s more of a Christmas movie than Die Hard (that’s a whole other conversation). They even show other Christmas flicks in the movie… along with Invasion of the Body Snatchers, which is, you know, the most festive of films.

Let’s take a detour real quick and talk about the little bastards themselves. Aren’t they fun? Brought to life with everything from animatronic puppets to classic stop-motion, they more than deserve their place in the Monster Hall of Fame. They’re funny when they want to be, relatively scary when they need to be. They also have no problem chopping people up with chainsaws.

Seriously, after this last re-watch, I just noticed the amount of implied death there is in this flick… as well as the more-than-implied death. A good bit… there’s a good bit in there. Ain’t that killer?

There’s no way Krampus wasn’t inspired by Gremlins in some form or fashion (the gingerbread men come to mind), but I digress. Point is, given that one is a cult-classic Holiday horror flick, and the other is on its way to be, they’d make a perfect fit for each other.

“After an accident that left murderer Jack Frost dead in genetic material, the vengeful killer returns as a murderous snowman to exact his revenge on the man who sent him to be executed.” – via IMDB.

I was going to make a joke about the Michael Keaton snowman flick, but then I’d be part of the problem.

This is a relic from the latter era of the slasher craze, around the late 90s to the early 00s after Scream revitalized interest for a little while. It was a peculiar period, where people were getting creative… detrimentally so, sometimes. Scarecrows (for less better, more worse), Djinn (more better, less worse), kinky chatroom killers (for better or worse), and snowmen. Are you scared yet?

This was an ambitious project, given the lack of funds… and snow, which is arguably more important. I know, a snowman movie without snow, already off to a great start. However, despite that, this is actually a pretty fun flick in a charming backyard-budget kind of way.

Sure, Jack Frost (the world’s most pissed-off snowcone) is essentially a low-rent Freddy Krueger, but that could be said for a great many slashers. What that says about the genre, I’ll leave to you. Anyway, he’s charming, but a lot of his jokes don’t stick the landing, not that I expected them to. But, Scott MacDonald is having a good time with it, and his enthusiasm carries what weight the comedy drops.

Related: ‘Trick ‘r Treat’: What Movies To Pair With This Delicious Halloween Anthology

I’m not going to lie, this flick is mostly held up by that “charm” I keep mentioning. The crew seem to be having a good time with it, and those good vibes melt into the viewing experience, which raises it a full letter grade personally. It’s a campy on-par B-movie that knows what it is and doesn’t try to be more than that. Others must share my opinion, because it has an amount of notoriety now… that, or the part where Jack sexually assaults a woman with a carrot turned more than a few heads. I hope it’s the former.

One could view Krampus as the anti-Santa in broad strokes, so it could be argued that Jack Frost is the anti-Frosty. However, Krampus has roots in Yuletide lore and has an incredible amount of respect on his name. Jack is more just a perversion of the concept he’s based upon. Not a bad thing, just putting Jack Frost on the same level as ol’ Krampus probably wouldn’t sit right with a lot of people. Not that anybody asked about this… just my thoughts on the matter… hm… look, they both have Christmas in it, so they go together.

“A zombie apocalypse threatens the sleepy town of Little Haven – at Christmas – forcing Anna and her friends to fight, slash and sing their way to survival, facing the undead in a desperate race to reach their loved ones. But they soon discover that no one is safe in this new world, and with civilization falling apart around them, the only people they can truly rely on are each other.” – IMDB.

Let me tell you something, Fright Fiends. Out of ALL the films I’ve watched for this piece, this is the one that took me by surprise, and not in the bad way, either. This flick was way better that I thought it was going to be… way, way better. Two ways. That’s how good it was.

I mean, you hear “High School Musical Teen Zombie Comedy”, and any confidence in the film tends to be fleeting. At least if you’re like me. For all I know, that sold you immediately, but it was definitely a harder sell for yours truly. That being said, by the time the credits rolled, I bought in.

Based on a short film named Zombie Musical (fitting), the first thing that caught me off guard was seeing the Orion Pictures logo pop up. Orion Pictures? They’re back? The studio behind Death Wish 3 and Lifeforce made this? WHAT?! My interest shot up like a bad guy on the wrong end of Charles Bronson’s magnum. Then the movie started, and that intrigue began to fade. I’m not going to sugarcoat it; the first 10 minutes feels just like a knockoff of High School Musical. A well-made knockoff, but still one nonetheless.

Things change when the zombies come in.

Somehow, this flick managed to balance the cheery optimism of a Disney story with the dark cynicism of a Romero feature. It’s kinda impressive, especially given how they don’t shy away from character death. The creators don’t hold back on the bleakness of the situation, and I think it’s all better for it.

Between the scenes of mayhem, the cast breaks into song and whatnot. It might sound cringey to some, it sure did to me. But, dammit, the songs ended up being real damn catchy. Not only do we have some decent zombie horror, but we’re also treated to some musical bangers? And good acting?! If my mind weren’t already munched on by zombies, it’d be blown.

It would be a nice companion piece to Krampus due to the fact neither take themselves too seriously… just seriously enough. The attitude of both are similar, being hopeful tales that have heaping helpings of darkness lobbed in for good measure. Like an optimistic sugar cookie, iced with cynicism… sitting right next to the chimney for Santa.

See Anna and the Apocalypse digitally here or physically here.

“United by terrifying and bizarre circumstances, the janitor, the drunk, the bartender, the cop, his perp, and the student security guard must fight to undo the professor’s work. A dark force is at work in the cadaver lab this Christmas and this unconventional band of heroes are the only hope the world has against an army of living corpses that are quickly recruiting new members. The undead have been given the gift of life and it’s up to the janitor to take it back.” – via IMDB.

Not only do we have another zombie flick on the list, it’s one that was also based on a short film! Yes, A Cadaver Christmas owes its origins to an entry made for a 48-hour film festival. Nice to see these creators getting their chance at making full features… weird, gory, repulsive features. Wouldn’t have it any other way.

Now, if Anna and the Apocalypse is the classy zombie story on this list, then this is its unapologetically trashy zombie-romp cousin. Blood, guts, harsh language, plungers going through heads, criminals getting fresh with corpses… yeah, it goes there. You let me know if that’s a selling point or not.

For a lower-budgeted (read: REALLY low-budgeted) flick, they manage to stretch out those dollars to get some fun gore scenes involving plenty of zombies (Cadavers!) getting their brains splattered, heads blown up, throats stabbed, faces mopped, all sorts of bodily dismemberment.

The acting is pretty bad at some points, but not-so-bad at others. In either case, I can say its charming and fits with the tone the movie’s going for. Charm does go a long way with me, I won’t deny it. It’s close to Hide and Creep levels of charm, but falls just short. What the hell is Hide and Creep, you ask? Don’t worry, I’ll get to it one day. All you need to know right now is that I consider that the PEAK of charming backyard-budget B-flicks.

Still, I had a fun time with A Cadaver Christmas, enough to recommend it to pair with Krampus. It would be a nice juxtaposition to Krampus‘s tamer attitude, something to feed that blood hunger for us Gorehounds.

Who knew that the hordes of the undead enjoyed the holiday season so much? Snowmen, naturally. Hell, even gremlins make a certain amount of sense, but zombies? Wouldn’t they freeze in the winter? I need to break out the Zombie Survival Guide and refresh my memory.

Anyway, we made it to the end! Not only of the article, but also the year, a new one coming forward brimming with new horror content just waiting to be unwrapped by us salivating fans. Until then, Merry Christmas and Happy Holidays to y’all! Be safe, and I’ll see you next year!