‘Trick ‘r Treat’: What Movies To Pair With This Delicious Halloween Anthology [Double That Feature] 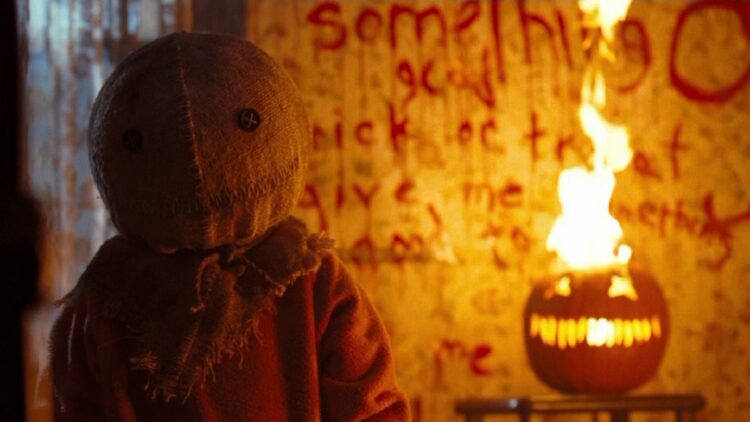 Gorehounds, Blood Babes, Fright Fiends, everything else that goes bump in the night: do you feel that? That sudden chill in the air? Do you smell the freshly cut pumpkins? The caramel apples? Do you see the ghost and ghouls peeking out of the shadows a little more often than usual? Do you wave at them? And do they wave back? What’s their name? Because if it’s Daryl, he owes me ten dollars, dammit, and I wanted it yesterday! He can’t avoid me forever, that creepy little bastard! Anyway, it’s Halloween!

The best time of the year! When one can be macabre, dress as monsters, eat copious amounts of candy, and marathon horror movies to your heart’s content. It’s pretty much what I already do all year long, except now it’s more socially acceptable.

Speaking of movies, it’s about time for another Double Feature, don’t you think? A good way to celebrate the holiday! The question is, what movies should we pair?

What better film to celebrate the spooky season than with the Samhain anthology by Michael Dougherty, Trick ‘r Treat? I’m aware that some of you may have objections to this, but work with me here. Let’s just “pretend” Trick ‘r Treat is the indisputable champion of Halloween movies right now. Okay? Thank you!

Trick ‘r Treat! The best Halloween movie ever made! No other Halloween flick even comes close to it! We all agree! It’s no contest at all. I’m glad we’re all on the same side on this!

For those of you not in the know, here’s a quick rundown.

Halloween night: The time of year when the barrier between here and the afterlife is thinnest, when ghouls and goblins walk the dark streets, mingling with the living without a second glance. During this night, creeps and horrors prowl about, some in search of delicious spooky treats, others for some pretty scary tricks. These are their tales, four of them to be exact, showing what exactly goes on Halloween night! Of note is Sam, the lovable trick ‘r treater who definitely doesn’t have a sinister side!

So, what would one possibly pair with the greatest Halloween movie of all time? What could conceivably match with it? Right below, I have dug up a pile of possible candidates to pair with this sin-amatic masterpiece of storytelling!

Let’s don our Shatner masks, grab our candy bags, and see what tricks these movies have in store!

“An anthology which tells five terrifying tales inspired by the E.C. horror comic books of the 1950s.” – via IMDB.

Creepshow! The best Halloween anthology movie ever made! Hey, we were only pretending Trick ‘r Treat was the best before, remember? How could it be the top when Creepshow exists? It’s a really close second, though!

What can I say that hasn’t already been said about this show for creeps?

Let me think… well, it’s my favorite comic book flick of all time. Being proudly inspired by 50s EC Comics, I feel it fits into the category, but your mileage might vary on that. Just know I’m prepared to die on this hill.

Also, it’s by far my favorite Romero movie. The amount of creativity that went into making this film feel like a comic is nothing short of great. Chef’s kiss. Just perfect.

Turns out, when you have George Romero, Stephen King, and Tom Savini go full throttle on some of the campiest, spookiest horror this side of the afterlife, fun stuff gets made. Who would’ve thought? I think it’s neat seeing Romero doing a less-serious project as opposed to his normal dower social commentary.

I’m sure the reasons for this pairing are obvious, but I don’t want to assume, so I’ll lay it out. They’re both horror anthologies, they’re both set around Halloween, and they’re both filled with scares/gore/spooky cheer! You really can’t go wrong with this combo.

“Ten stories are woven together by their shared theme of Halloween night in an American suburb, where ghouls, imps, aliens and axe murderers appear for one night only to terrorize unsuspecting residents.” – via IMDB.

Look, I’m not going to sit here and speak the praises for Tales of Halloween. It’s not an “unsung gem of the genre”, or some kind of “so-bad-it’s-good treasure”. Hell, it’s not even one of the best Halloween flicks out there. But damn if it’s not fun.

Not every story is a banger, but that doesn’t even matter due to just how much the feeling of the holiday permeates from it. The Halloween spirit completely possesses this film, and it doesn’t ever get exorcised, not even for a second. It’s refreshing!

A lot of fun concepts are presented here, ranging from evil neighbor-grandpa Satan, to evil baby-fever witch, to even evil man-eating pumpkins. There’s a whole lot of evil in this package, let me tell you. There’s also a fun riff on the slasher genre involving aliens, starting as Friday the 13th before becoming Evil Dead 2.

Some familiar faces of horror show up here. Well, faces and a voice. Adrienne Barbeau lends her iconic vocals as the film’s narrator, with appearances from such genre-veterans as John Landis, Tiffany Shepis, Alex Essoe, Lin Shaye, Barbara Crampton, Mick Garris, Stuart Gordan (he’ll be forever missed), Pollyanna McIntosh –you can break for coffee if you need, it’s a long list– Felissa Rose, Adam Green, Nick Principe, Pat Healy, John Savage (of Carnosaur 2 fame), Greg McLean, and Joe Dante. If you really like cameos and are well-versed in horror culture, you’re going to love this one.

As I said before, none of the tales are the “best-thing-ever”, but there’s more than enough charm to carry the film through. It just feels like Halloween, you know?

Other than the shared Halloween theme, this flick compliments Trick ‘r Treat as they both have heart! The love of Samhain embraces each entry, and you can feel it pulse through their warm candy-filled veins. The only difference between them is budget and Trick ‘r Treat is a tad more creative.

“A young boy tells three stories of horror to distract a witch who plans to eat him.” – via IMDB.

Also known as the “real Creepshow 3”. I want to banish that other one from my mind, but one is doomed to repeat history by forgetting it, so I’ll shoulder that burden.

That being said, none of Creepshow’s direction can really be found here. I know, I sound contradictory, but let me explain myself. You see, unlike Creepshow, this one follows a storybook approach as opposed to the comic-book-style of its predecessor. This is interesting, given that the show this film branched off from, while not following the format either, still felt very EC comics-ish. It’s not a bad thing, just a curious thing.

Where this movie does follow in Creepshow’s footsteps is adapting Stephen King and keeping the tongue-in-cheekiness. Each story is genuinely fun, getting more imaginative as it goes on. From an auction-bought mummy, to killer cats from Hell, to one of the most heartbreaking romantic tragedies I’ve seen. Weren’t expecting that, were you? It’s true, though!

While not necessarily a Halloween flick, I do feel the film’s overall attitude meshes pretty well with that of Trick ‘r Treat… that attitude being a healthy respect for well-deserved comeuppances and bloodthirsty devils.

You can watch it digitally here, or physically here.

“A police S.W.A.T. team investigates about a mysterious VHS tape and discovers a sinister cult that has pre-recorded material which uncovers a nightmarish conspiracy.” – via IMDB.

The V/H/S franchise is a peculiar thing, isn’t it? I mean, it was just a little anthology film by a group of indie horror creators that blew up immensely in popularity, garnering a pretty dedicated fanbase that speaks its praises regularly. I think the sole reason for that is its first story (“Amateur Night”) because the rest of the film pales in comparison. Following that, we received the just-as-good V/H/S 2, then the not-just-as-good V/H/S Viral, ending the series on a relative whimper. Or so we thought.

Turns out, Shudder wasn’t happy with all that and took it upon themselves to right this perceived wrong! At least, that’s the heroic interpretation I’m telling myself. I’m sure it was just a solid business move or something. In any case, this is my personal favorite out of the series.

This is entirely personal preference, of course, given that unlike the last films, this one solely focuses on practical FX monsters and generous amounts of gore, which are two of my favorite things! Not only that, but the FX presented here are actually decent for the most part, which is good news for us gorehounds.

You want a sewer rat god cult? You got it! A dismembered corpse shambling around a wake? Sure! Mad science body-horror cyborgs? Say no more! An exploding rabbit? An odd request, but if you insist!

Some of the narratives are better than others, but I wouldn’t say there’s a bad one here. They all have good-sized runtimes, get straight to the point (for the most part), and are fun times to be had for those that like creature-romps.

Pairing this up with Trick ‘r Treat seems like a good choice, I think. Both have a fixation on ghoulish fiends that tend to have a habit of ripping through people like a candy wrapper. Seems appropriate, no?

Watch it digitally on Shudder. No word on a physical release yet.

Happy Halloween! Please, for your ol’ pal Giallo, be safe out there! Whether you’re out for treats or preparing for tricks, be sure to watch the dark corners, respect the jack-o-lanterns, and if you hear a distant howling, tell yourself that it’s just a dog.