Bent Out of Shape: Michael Myers’ Muddied Mythos and the Infuriating Ending of ‘Halloween Kills’

The ending of 'Halloween Kills' is a frustrating reminder that the 'Halloween' franchise has long been confused about Michael Myers' mythos. 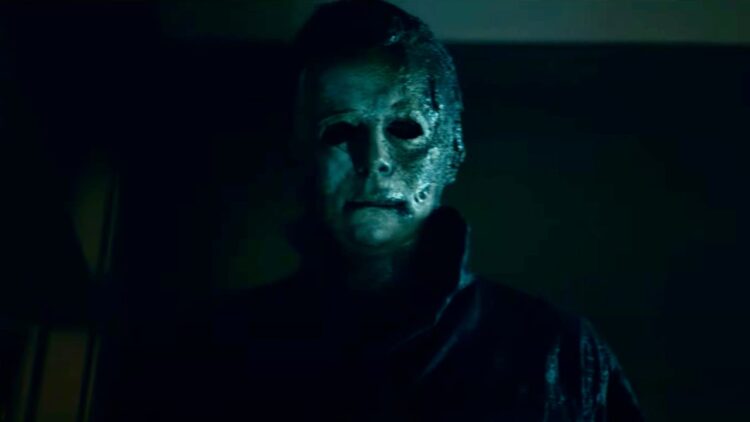 Editors’ Note: Spoilers for Halloween Kills and other Halloween films ahead.

Halloween Kills, the second entry in Blumhouse and director David Gordon Green’s rebooted Halloween trilogy, is already proving to be divisive, inspiring what is likely the scariest October discourse the horror scene has endured in quite some time.

There are several reasons for this, of course—among them, callbacks and nostalgic casting that lands as either heartfelt or exploitative. There is, too, the nature of middle chapters themselves, that can leave some feeling that Halloween Kills does little but grind its gears en route to the story it really wants to tell, but won’t be addressed until next year’s Halloween Ends.

But for Myers fanatics, there’s one element that arguably jeopardizes the entire thing: the muddying of Michael’s mythos in Halloween Kills‘ ending.

Before we pick apart those final moments of Halloween Kills, though, it’s important to retrace Myers’ many incarnations throughout the series.

In John Carpenter’s original, Michael Myers is simply the boogeyman. He is, as listed in the end credits, “The Shape.” He’s evil, yes—Dr. Loomis won’t soon let you forget it—but an abstract evil, no different than Leatherface carving up interlopers in The Texas Chain Saw Massacre or Billy reinforcing regressive patriarchal ideals in Black Christmas. There’s specificity to Michael Myers insomuch as he’s a symbol of suburban ennui and burgeoning crime. But he’s also nebulous enough to affect audiences on mass scale. Michael Myers isn’t Haddonfield’s boogeyman, but everyone’s boogeyman.

Carpenter himself opposed Halloween II, and for good reason: In that 1981 film, Myers went from universal monster to Haddonfield native. He wasn’t after anyone else but his sister, Laurie Strode (Jamie Lee Curtis). The movie’s infamous twist is the foundation for the first of Halloween’s original timelines, and led to Halloween 4: The Return of Michael Myers—an entry that no less controversially killed off Laurie off-screen and followed her daughter Jamie Lloyd’s (Danielle Harris) efforts to escape Michael’s wrath.

Halloween 4‘s ending further explored the Myers mythos, suggesting in its final reel that Jamie—who stabs her adoptive mother as Loomis looks on in horror—had embodied Michael’s evil. But in Halloween 5: The Return of Michael Myers, this is swiftly retconned. Jamie’s mother survives, and Halloween 4 is treated as a fluke in favor of a new angle: Jamie’s psychic connection with Michael.

It’s psychobabble and more complicated than it needs to be. Worse still—and I say this as a fan of both films—it further distances Michael from what makes him Michael. In Halloween 4 and 5, he’s ephemeral, scary for as long as he’s on-screen and nothing more. The boogeyman is terrifying. A hulking child murderer with a complicated family lineage and psychic links? Not so much.

In Halloween: The Curse of Michael Myers, Michael’s mythos only gets messier, adding druid mysticism, cults, and more religious iconography than there are Haddonfield residents. The plot of both The Curse of Michael Myers and its Producer’s Cut explore the Curse of Thorn, a mystical runic symbol with links to its namesake constellation that appeared during Samhain. As the story goes, one family was chosen to bear the curse—the caveat being that the bearer needs to murder their entire family in order to spare their neighbors from further tragedy. (As a bonus, those bearing the curse are bestowed with inhuman strength and ostensible immortality.) Allegedly, Dr. Wynn (Mitchell Ryan) placed the curse on Michael Myers in 1963, thus inciting his entire killing spree.

The prevailing theme throughout: Efforts to complicate a simple monster sullied the Halloween series.

To rectify this, the first soft reboot of the franchise, Halloween: H20, saw Curtis return as Laurie and ignored 4, 5, and 6 entirely. But H20‘s gangbusters ending was immediately retconned in its sequel, Halloween: Resurrection, with Laurie killed off on account of the most ludicrous case of mistaken identity imaginable (thanks, Kevin Williamson). The franchise, once more, was left with nowhere to go.

Then came Rob Zombie’s remake and its sequel. Outside of its prologue detailing Myers’ origins, Halloween (2007) was a faithful, albeit more violent, revisitation of its source material. That sequel, though, messed things up all over again.

As a standalone work, Zombie’s Halloween II explores some fascinating ideas. The film also looks great, and has a gonzo, throwback charm that renders it better than it appeared when first released. Still, as is par for the course with this franchise, Zombie backs himself into a corner. His Halloween II eschews everything from his first Halloween and fixates on ethereal images of Michael’s mother and a white horse that guide him back toward Haddonfield.

Why does something as simple and timeless as “pure evil” keep getting so complicated?

Carpenter’s original, as succinctly put by Drew Barrymore’s Casey Becker in Scream, was about “the guy in a white mask who walks around and stalks babysitters.” Of course, Halloween achieved much more than that, but if you wanted some zealous explanation of its antagonist’s true nature, you’d never find it in the 1978 classic. Michael Myers was The Shape, the boogeyman… that’s it.

It made sense, then, for Green and Blumhouse to get back to basics. For all its thematic posturing, 2018’s Halloween was largely successful in making Michael scary again. Not all of it worked, and Dr. Sartain (Haluk Bilginer) veered dangerously close to Dr. Wynn territory. But it was a return to the roots of the material that the franchise desperately needed. Michael, no longer Laurie’s sister, was back to being the boogeyman.

That was good while it lasted.

When his three Halloween films were announced, Green was adamant that they would be beholden only to Carpenter’s original, other sequels be damned. But the ending of Halloween Kills renders that promise little more than hot air.

In Halloween Kills‘ final act, Michael is violently taken down by a mob of enraged Haddonfield citizens. They brandish irons and bats and beat him to a pulp, and Laurie’s daughter Karen (Judy Greer) rises to deliver the final blow: a butcher knife into his back.

When Michael appears dead, Green cuts back to Laurie at Haddonfield Memorial Hospital. There, she delivers an arbitrary and infuriatingly needless monologue:

“I always thought Michael Myers was flesh and blood like you and me. But a mortal man could not have survived what he’s lived through. The more he kills, the more he transcends into something else impossible to defeat: Fear. People are afraid. That is the true curse of Michael. You can’t defeat it with brute force. It is the essence of evil. The anger that divides us. It is the terror that grows stronger when we try to hide. If they don’t stop him tonight, maybe we’ll find him tomorrow, or next Halloween when the sun sets, and someone is alone. You can’t close your eyes and pretend he isn’t there… because he is.”

Karen is then killed in the same spot Michael killed his sister, Judith, decades prior. And once more, the series foregoes the perennial boogeyman for a Myers more mystic and arbitrary.

Halloween Kills‘ ending is further complicated by Green’s post-release remarks, in which he says that he considers Michael to be both flesh and blood and cosmic. None of this adds up.

Part of what’s always remained intriguing about Michael Myers is that killing him always felt within the realm of possibility. Even if no one succeeded, it always felt like he could be defeated. But in the ending of Halloween Kills, we’re explicitly told that he cannot die. This plot reveal tarnishes his legacy no less than the Curse of Thorn once did. He may no longer be the child murderer of 4 and 5, but this new timeline nonetheless reduces Michael to some otherworldly “it”—a being that exists beyond life and death.

Further, Halloween Kills‘ climax undermines something the movie pretends to care so much about: the psychic baggage carried by Myers’ survivors and its influence over an entire town. This community is bound by shared trauma, and it’s that trauma that empowers them in their struggle against The Shape. If they discover that Michael is, after all, immortal, then isn’t everything they’ve endured for naught?

Looking ahead to Green’s next film, Halloween Ends, hope persists—the fickle being it is. Perhaps everything in his first two Halloween films will be pieced together in a satisfying new conclusion to the Laurie and Michael saga. Halloween Kills‘ parting monologue may not amount to much in the end, and there could be a perfectly logical reason for Michael to withstand what he did and live to kill again. (I doubt it, but who truly knows?)

For now, though, the Halloween franchise is back in that corner it’s spent over 40 years trying to escape. The more Michael kills, the more he transcends into something impossible to comprehend.