The Overlook Motel: ‘High Lane’ is an Under-Seen Diamond in the Rough

This intense French language thriller from 2009 is not to be missed! 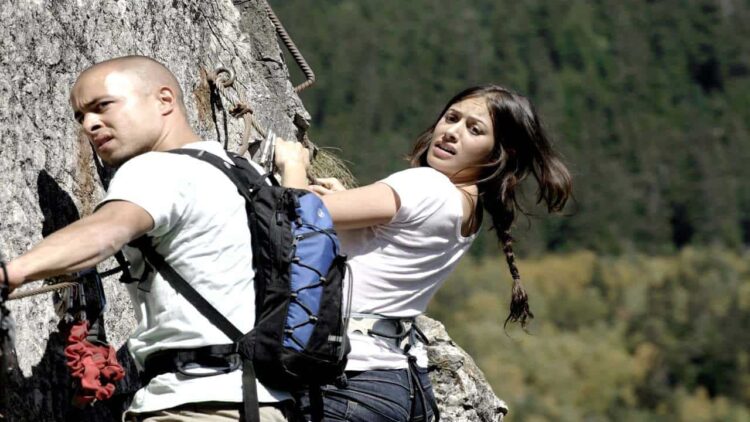 On the inaugural edition of The Overlook Motel, we will be looking back on the 2009 French horror film, High Lane (Vertige).

High Lane follows the exploits of a group of friends as they embark on a climbing excursion that pits them against life-threatening danger at every turn. But the obstacles they encounter while scaling the mountain are eventually overshadowed by the realization that they are being targeted by a deranged madman who kills for sport.

This film is full of scares and surprises. Director Abel Ferry ratchets up the tension from the get-go. The bridge scene that unfolds in the first act is so tense that I’m not sure I can do it justice with words. Suffice to say, it ranks up there with the opening to Cliffhanger as one of my favorite cinematic white-knuckle, mountaintop sequences. The camera work and frantic editing used in this sequence make me sick to my stomach (in a good way). The top-notch sound design and ominous musical cues serve to ratchet up the tension further.  Even if you don’t dig the rest of the film (although, I think you will) High Lane is worth checking out for this scene alone.

Also See: These 8 Horror Films Brilliantly Channeled the Essence of the ‘80s and ‘90s

The precarious climbing conditions are only the beginning of the hardships to which the protagonists are subjected. And once the film veers into full-horror territory, it almost feels like a relief from the constant threats leveraged against the friends by the perilous mountain. But that reprieve is short-lived as the antagonist introduces the protagonists to a different, but equally chilling, brand of terror.

I have to hand it to screenwriters Johanne Bernard and Louis-Paul Desanges. They smartly intensify the dread inherent to the situation the friends find themselves in by letting them fall prey to jealousy, insecurities, and communication breakdowns. As their resolve is tested, the audience can see the cracks in the foundation of their friendships. And the result is constantly palpable tension.

The film’s cast is primarily enjoyable. Johan Libéreau is the least palatable of the group. And his portrayal of Loïc can be a bit grating at times. But he isn’t obnoxious for the sake of being obnoxious. Loïc’s pigheadedness adds an additional layer of intensity to a number of already horrifying scenarios. With that said, the voice actor that performed Libéreau’s English language dub didn’t do the character any favors. If you wind up watching that version, you’ll see exactly what I mean. His antagonistic and selfish behavior is even more taxing when his dialogue sounds like it’s being recited by a whiney child.

On that note, I highly recommend tracking down the subtitled version of this flick. High Lane was on Netflix for a spell. But, it was only made available stateside with the English language dub, which takes a lot away from the experience. The dubbing is wanky and fails to fully capture the terror inherent to the film’s original, French-language cut. The DVD release of High Lane, however, defaults to the subtitled version.

From the Vault: Review: High Lane

I’m not entirely sure why High Lane seems to have flown under the radar for horror fans. I suspect it has something to do with it being a foreign language film. Subtitles seem to work as a deterrent to some U.S. viewers. But I can assure you this thrilling adventure is well worth seeking out.

I hope you’ve enjoyed your inaugural visit to The Overlook Motel. Please check in again soon, as we will be showcasing under-seen and overlooked gems on the regular.