Sharai Bohannon compiles a list of films featuring some of her favorite Black Final femmes and why you need to watch them ASAP. 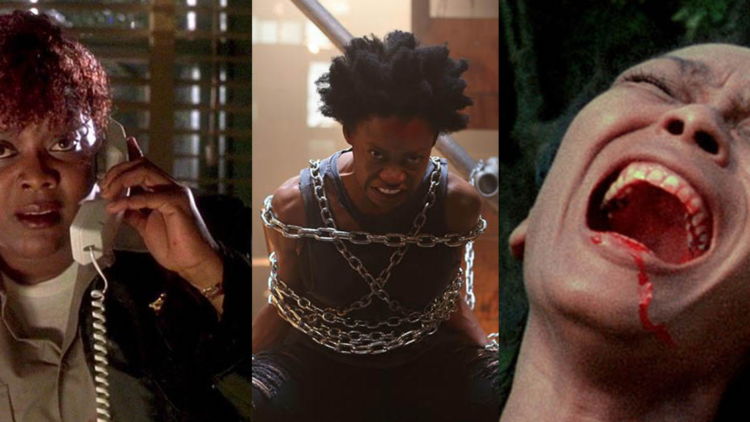 Sometimes I get tired of watching Black people unnecessarily die in horror movies (glares at Annabelle). As a fan of the genre for a few decades, I am forever watching Black characters get sacrificed (looks at the whole Alien franchise and A Quiet Place II) and I find myself screaming into the Twitter void wondering why we can’t do better as a whole. A couple of months ago, I asked Twitter to help me compile a list of Black final femmes to make sure my watch list for 31 Days of Halloween looks different than previous years. The list is magnificent and already longer than I could have dreamed so, I had to make some tough calls and search my soul for a shorter list to share.

Grier is an icon playing an icon in this often overlooked classic. Not only does she hold her own as a Black woman in a blaxploitation horror film, but her character, Lisa, is also the one to defeat Blacula. Lisa walked so that everyone else on this list could run, and for that, we are eternally grateful.

Adeliyi sinks her teeth into the unusual character of Lacey. She is an anti-social character that leaves a bloody trail of men who tried her in her wake. This movie also sparks joy because we do not often see Black final femmes over 40 violently ripping their way through the villains. We love to see it!

Ganja is a woman that does not believe in mincing words and knows her time is valuable. Clark seems to have a fun time stealing scenes and bruising egos even before she realizes she is living with a vampire and might want to think about joining the undead. This is another Black femme in the ’70s that is no one’s damsel in distress.

While this series is divisive, one thing we can all agree on is that Loretta Devine is a boss! She takes this cop stereotype and finds the warmth and humor of Reece while also managing to appear in two installments. That’s right! A Black final femme is in two whole movies of the same franchise! Talk about making history.

Melanie, The Girl With All the Gifts

Where You Can Watch: Cinemax

Nanua has the hard task of making Melanie empathic, scary, naive, and strong all at the same time. Her performance helps this movie stand out in the sea of Zombie movies and elevates it to art. She is our heroic anchor in this beautifully sad zombie movie and is the youngest person on this list because she more than earned a spot

Does McKayla count as a final girl if she is also one of the murderers? The answer is hell to the yes when Shipp makes it this much fun to watch her slash her way through this small town. She is the iconic (and filthy rich) half of this twisted duo and the only one that does not believe in straying from the path. It is also so refreshing to see a Black femme be one of the slashers for a change

Where You Catch Watch: Netflix

Mosaku steals this movie so early on that we often forget this is not a masterclass. The fact that she did not win multiple awards for this performance is a crime. Her depiction of a haunted woman on a journey to make peace with the past would be captivating even if we did not get to see her fight the physical manifestations of all that she cannot leave behind.

Yvonne, A Nightmare on Elm Street 5: The Dream Child

Where You Can Watch: HBO Max

Yvonne was the first (and only) Black woman to defeat Freddy Kruger. Not only is that a historic moment, but Minter is also the MVP in this wild installment of the franchise as the only actor to get on Robert Englund’s level performance-wise. As a child, I wanted to be Yvonne because she was smart, tough, and so much more than the stereotypes flooding this era.

Parris always understands the assignment, and her portrayal of Bri is no different. She is not your typical final girl that will go through the motions and end up in danger for no reason. Bri makes smart choices and fights back until the end of the movie. She is a survivor that picks up the rules quickly and uses Candyman to her advantage to save herself from the real monsters, the police.

We are gathered here today to talk about how Nyong’o played two entirely different versions of the same character in Us. You can’t watch this movie without noting the different physicalities, vocal inflections, breathwork, etc. Her Red is the stuff of nightmares, and that is just the monster we could identify. Can you imagine a world where Adelaide shows her family who she is? Because I can, and I want it right now!

These are my Top 10 Black Final Femmes from the list Twitter helped me compile. Let me know if your favorite did not make the cut over on Twitter @misssharai.