‘Cryptid’ Has A Lot Of Bark But Little Bite 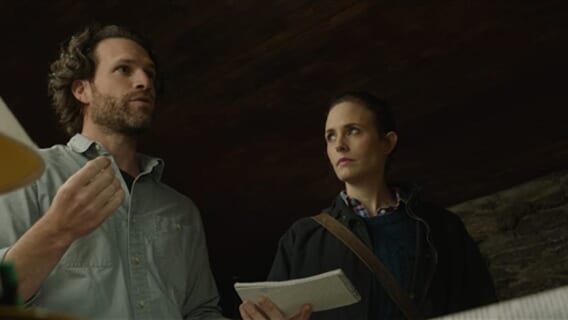 Cryptid follows a freelance journalist, Max (played by Nicholas Baroudi) as he investigates a string of grizzly killings in his small town. The authorities keep trying to write the murders off as bear attacks, but the real culprit is something much scarier.

One of the reasons this movie was on my must-see list is that the trailer left me feeling nostalgic. It also left me wanting answers. After some digging, I discovered the “Creature” was played by Emme Burchardt and moved it higher up my watch list. I mean, how often do we get monsters not played by cishet dudes? Sadly, at the end of the hour and fifty-four minutes, I found a movie that felt familiar but bloated.

Also Read: ‘Chaser’ Is A Trippy Ride Into The Future [Review]

It’s clear that writer-director Brad Rego and I probably have the same taste in supernatural television shows of a bygone era. This film feels akin to the early seasons of Supernatural, The X-Files, and a little bit of Eerie, Indiana but for adults. I enjoyed the waves of nostalgia Cryptid dealt me, but that’s about where the good times ended.

Max could be a fun character but every time he almost has an interesting moment it goes on for way too long. If he wants to bask in his brilliance at cracking something, then that’s cool. However, it sometimes felt like the movie would over-explain the simplest of concepts to drag these beats out. This is one of the things that hurt his dynamic with his scene partner Harriet (played by Ellen Adair). They never found their Mulder and Scully, or Sam and Dean, stride because all of their scenes go on forever. Some of the neverending scenes do try to paint some backstory to the characters. However, it all feels a bit melodramatic. The small-town shenanigans were never going to live up to the people-eating critter running around these streets anyway though.

Max’s scenes with Harriet aren’t the only ones that felt bloated. After the creature kills a major character, Max and Sheriff Charlie Murdoch (played by Chopper Bernet) set out with two other guys from town. Instead of giving us the new guy’s name and reminding us that we’ve seen this deputy earlier, they stand around talking about why they trust the Sheriff and giving us more exposition that isn’t needed. When they finally do set out to find their nemesis it’s not the thrilling moment I was hoping would make up for the rest of the film.

Cryptid could’ve had such a cool final battle. However, after doing away with half the hunting party and sneaking a couple of swipes at Max, the final battle goes out with a whimper. This is sad because when Max comes literally face to face with the monster, it’s in a narrow space, and I leaned forward thinking this would be the payout. It was just another let down though.

Instead of ending the movie there, Cryptid gives us another couple of scenes that over explain what the findings mean. It also leaves a giant window open for a sequel. While this film is a no for me, I can’t help but wonder if, in sequels, the film would allow itself the chance to have fun. It truly felt like we could’ve had it all, but it kept getting in its way.

We recently ran across Cryptid while scoping out new horror releases and bookmarked it to check out later. Let me know if you also checked the movie out after that article a few weeks ago at @misssharai.

This movie cuts off its dynamite at every turn which makes it hard to have a good time as a viewer. It’s also a very long journey for so little reward.