‘Missing’ Places a Dizzying Mystery Right at Your Fingertips [Review] 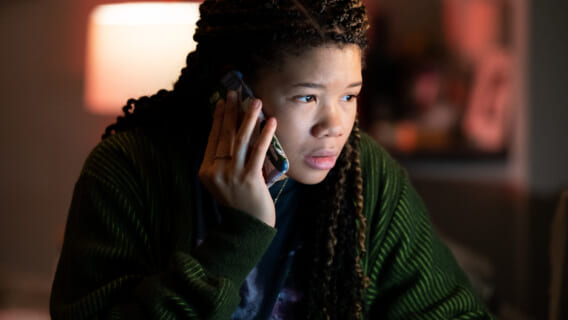 We all take our moms for granted every now and again. At an alarming rate, the screen in front of us is becoming more interesting than the actual people we see every day. Vying for your child’s mindshare is an uphill battle when they now have the luxury (and curse) of having the entire history of the world at their fingertips.

Rekindling the relationship between a mother and daughter is at the heart of the new “screen life” thriller Missing, the sister film of 2018’s internet procedural Searching. The conceit of telling a story entirely through the devices we use daily is nothing new. The concept isn’t exactly found footage either, even if the idea is basically the equivalent of opening another web browser instead of picking up another film camera. What sets Missing apart from stories with similar gimmicks is the surprising amount of heart it packs into a taut family mystery.

Before her mother Grace (Nia Long) and new, annoyingly likable boyfriend Kevin (Ken Leung) go on their first big vacation together in Colombia, June (Storm Reid) is trying to play it cool. As Grace’s daughter, she’s about to have the entire house to herself. That means throwing an epic rager with as much cheap booze as her in-case-of-emergency money can buy. When she comes to after a night of excess, June rushes to the airport only to find that her Mom is nowhere to be found. The whole situation leads her to an admittedly impressive display of amateur sleuthing on her trusty laptop.

Also Read: ‘Skinamarink’ Leaves You Unattended In The House You Grew Up In [Review]

From there, she falls further and further down the digital rabbit hole. June entrusts her mother’s best friend (Amy Landecker), June’s own best friend Veena (Megan Suri) and a totally game Colombian local named Javier Ramos (Joaquim de Almeida) to help uncover clues on the ground. Fingers are pointed, passwords are hacked, and the central mystery of Missing kicks into high gear.

Making their feature film debuts, directors Nick Johnson and Will Merrick really benefit from a lightening quick script from Sev Ohanian and Aneesh Chaganty. Both writers also penned Searching, so they avoid falling into the same pitfalls here. Instead of focusing entirely on the many ways someone can be cleverly uncovered or remain cloaked in secrecy via the web, Missing also shows how people can fall in love online, too.

The myriad of ways June makes discoveries never feels unearned or claustrophobic. There are some genuine “A-ha!” moments where June’s wheels keep turning as she desperately hunts for Grace’s whereabouts. The trail of clues actually expands the world beyond June’s laptop.

Having the character Javier Ramos on the ground as June’s counterpart allows for a real detective story to emerge that isn’t completely tethered to a charger at all times. The inclusion of Joaquim de Almeida as Javier also gives the movie a little more humanity. There’s a focus on helping others in a time of need and an emphasis on the importance of family.

The ending of Missing may be a little predictable, however. When the revelation comes, there aren’t too many red herrings remaining. The mystery isn’t really the point though. Besides, isn’t getting there half the fun?

Missing arrives in theaters on January 20.

International intrigue helps to transport Missing from a tiny laptop to a globe-spanning hunt for the truth.</span