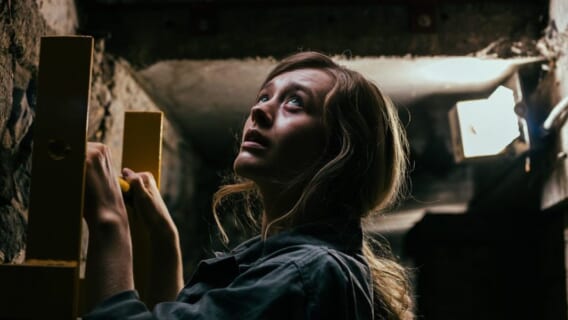 In an underground facility, five scientists wake from cryogenic hibernation with no memory of who they are or how long they’ve been asleep. They soon make a shocking realization—a killer is hunting them down there, and may even be hiding among them.

Cryo feels like the standard, contained sci-fi movies like Cube or Elevator that most of us grew up watching. The ones with people trapped in some weird space that are full of endearing but questionable acting. Like those movies, Cryo throws us into the plot and lets characters be secondary. As the characters wake up they have no memory of who they are. They start referring to each other by their assumed jobs.

Director and co-writer Barrett Burgin gave FilmQuest attendees a tour of the small space used for the film. Knowing that it was filmed mostly in a corner of an event space makes it hard to not appreciate the direction and set design. We all love indie filmmakers who embrace their budgetary hurdles and churn out a finished project where we can see the vision. Working in that small space is no easy feat. Getting it lit so well was probably also a struggle. I applaud the creativity and problem-solving that had to go into getting the moments we did from a technical standpoint.

Sadly, my biggest issue with Cryo is how uneven the acting is. I’m not mad that I caught on to the film’s twist pretty quickly. I’m not even disappointed at the parts of the script that fell a little left of center. However, some of the performances made it a bit of a chore to finish the movie. The performances also made the turn at the end feel so sentimental to the point that it almost belonged in a Lifetime holiday movie.

Specifically, when the Psychologist (played by Jyllian Petrie) makes the final reveal and the reasoning for this experiment becomes clear, the moment falls flat. As she’s explaining everything that we already figured out, we are also getting this missing piece of the story that explains this is all being done out of love for a parent. Which is a fine button for this movie. However, it doesn’t feel quite earned in this iteration of this story.

Cryo is a hit of nostalgia that makes you want to root for this movie. Even though we’ve seen it before there’s something appealing about it. It could have been a blanket for sci-fi nerds to get under and remember sneaking to watch this subgenre on basic cable as kids. However, it never quite hits its mark.

Have you seen Cryo? Then drop me a line at @misssharai and let me know what you think.

Cryo had a lot of potential and touched many of the right notes for the 90s made for TV contained sci-fi adventure of yesteryear. However, it never really soars.