‘Who Invited Them?’: A Creepy, Yet Hilarious, Piece of Home Invasion Horror [Overlook 2022 Review]

It's more fun than your coworker's cocktail party! 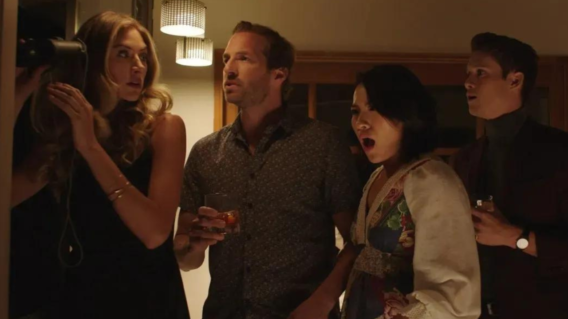 Between American Horror Story: Murder House, The Invitation, and 1BR,  L.A. real estate horror is practically its own subgenre. (And if you’ve ever checked housing prices in the city, you’ll understand why.) The horror comedy Who Invited Them? is a new entry into this growing canon.

Writer-director Duncan Birmingham previously worked as a writer on IFC’s Maron, and his comedy background is obvious in the script, probably the most compelling aspect of the film. The first half of Who Invited Them? combines relationship drama with a comedy of L.A. hipster manners, as dorky family man Adam (Ryan Hansen) and his much cooler wife Margo (Melissa Tang) hold a housewarming party.

This is one of those movies where everyone secretly despises each other, and so Adam and Margo’s “friends” spend the evening whispering about their hosts. Are they actually happy together, or are they just pretending? Why is Margo hiding in the kitchen with the caterers? And, most importantly, how did these two losers afford a stylish midcentury house in the Hollywood Hills?

The answer will be obvious to anyone who watches true-crime shows: It’s a murder house, duh. That’s one of many secrets that come spilling out when Adam and Margo are cleaning up at what they think is the end of the night, only to find that two well-dressed strangers, Sasha (Perry Mattfeld) and her husband Tom (Timothy Granaderos) are still hanging around. Sasha and Tom apologize for the imposition — they live next door, they say, and couldn’t resist popping in on a party.

The neighbors turn out to be master manipulators, playing on Adam and Margo’s insecurities until Adam kicks them out, apologizing all the while. Who Invited Them? is a character-based film, and the tensions in Adam and Margo’s marriage are believable and well-acted. (Margo in particular feels like a real, complete person, asking all the questions the audience likes to think they’d ask in this scenario.) Sasha and Tom, on the other hand, are ciphers, chameleons whose actions are purposefully inscrutable.

That being said, it’s pretty obvious where Who Invited Them? is going. As the suspense mounts, viewers may start wondering when the Funny Games are going to begin. And Birmingham does a good job teasing the audience with the possibility of violence, while coyly withholding the orgy of bloodshed that seems sure to explode at some point. The latter half of Who Invited Them? is full of wild twists. But in terms of actual horror content, by the time the blood does start to flow it feels a little late. But with such well-drawn characters and playful direction, the film is way more entertaining than a cocktail party at a coworker’s house regardless.

While the horrors and blood start to flow a little late, well-drawn characters and playful direction make ‘Who Invited Them?’ way more entertaining than a cocktail party at a coworker’s house.