‘RoboCop’ 4K Review: I’d Buy That For (More Than) A Dollar 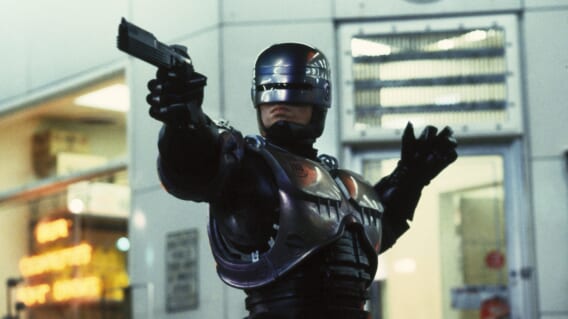 Does this review need to say more than “RoboCop is a perfect film”?

Director Paul Verhoeven’s 1987 cyborg Christ vehicle is a satirical sci-fi blend of corporate oversight, decaying infrastructure, rampant violence, greed… and unabated violence. So much violence. Peter Weller breathes life into a robotic shell as Murphy, a murdered cop whose body is “donated” to the suits at OCP, the company that runs the police. He’s resurrected as RoboCop, ostensibly the ultimate crime deterrent. This new cyborg finds memories of a past life overriding his programming, leading to his seeking out Detroit’s worst for their overdue comeuppance.

That’s the gist of things. But as anyone who’s seen the film can tell you there’s so much more going on here. The commercials. The news breaks. An endless assortment of peripheral characters with defining moments. Incorruptible heroes. Incredible villains. Corrosive quips. Verhoeven’s Detroit is a near-future nightmare, where cops are killed almost daily and the city has effectively turned over control to a company with a vested interest in seeing human police eliminated.

Numerous think pieces have been written on the film’s underlying themes of capitalism, corporate greed, masculinity, religion, and technology. RoboCop doesn’t just present a cyborg crime-fighter; it produces an entire ecosystem in which he is one salient component. Writers Ed Neumeier and Michael Miner satirized the worst aspects of “Reaganomics” and in the process wrote an eerily prescient tale that doesn’t seem too far removed from today’s reality. I’d pine for a RoboCop of our own but let’s be honest here: it would undoubtedly cause as much mayhem as an ED-209 unit.

A great film can be elevated even higher by a complementary score. Nobody could have written better themes for this dystopian world than Basil Poledouris. His marriage of classical instruments and electronics is the ideal sound for a film in which man is made machine. His music conveys the pain of loss, a desire for revenge, and features one of the most iconic, triumphant main themes of all time. I don’t make that claim lightly either. This is a seriously fantastic score that perfectly harmonizes a range of emotions.

I’d be remiss not to mention the outstanding special effects work, too. Rob Bottin led a team that also included Phil Tippett, which should be enough to say the work here is unparalleled. Bottin was primarily responsible for designing RoboCop while Tippett handled the stop-motion work of ED-209. There is a wealth of artistry on display constantly, from Mr. Kinney’s violent squib-riddled death to Emil’s nuclear makeover to a stop-motion dinosaur featured in a car commercial. And all the glorious matte work… Verhoeven’s film truly is a rare feature, where every aspect is perfectly executed and the results gel together in powerful fashion.

Now on to the primary reason most will read this review: the 4K transfer. Arrow previously issued a limited edition Blu-ray that featured a stunning 4K transfer from 2013, approved by the powers-that-be. Eight years later the film has received a fresh 2021 4K HDR10 color grading. The director’s cut scenes have also been given a fresh 4K scan, giving this 2022 release a marked difference from that already-impressive Blu-ray. The 1.85:1 2160p picture is structurally tighter than before, with upticks to fine detail and a wider spectrum of color.

The most evident upgrade to my eyes is the additional director’s cut footage, which is more in line with the rest of the feature. Previously, those scenes looked rougher, with excessive grain and varying contrast. The many optical effects still look ultra-grainy and less sharp. But this isn’t news to anyone that knows how those work; they’ll never appear better. Film grain looks natural and isn’t overbearing in any way. As someone who watches this film at least once a year I found it worth upgrading solely for the improved quality of the director’s cut scenes. But then I’m also a sucker for any kind of video upgrade so your mileage may vary.

Also Read: The Best Thing About ‘Shark Bait’ is That it Runs Less than 90 Minutes [Review]

It isn’t just the video that gets an upgrade here, as there’s a new audio option to be heard: English Dolby Atmos (which folds down to TrueHD 7.1 if you don’t support that codec). The additional atmosphere afforded by the extra channels is obvious from the opening frames. Since I’ve watched this so many times on various home video formats my ears were quick to pick up on these changes however minute. This is an active track with lots of gunfire and explosive action all while Poledouris’ booming synthscape pours out from every speaker. A true beast. There are also DTS-HD MA 2.0, 4.0., and 5.1 options available if you have a specific preference. Subtitles are available in English.

There are no Blu-ray discs present but Arrow tends to port over all prior bonus features to 4K. This release is no exception; it’s absolutely packed.

“Truth of Character with Nancy Allen” (HD, 18 minutes and 26 seconds): A new sit-down with the actress.

“Connecting the Shots with Mark Goldblatt” (HD, 11 minutes and 6 seconds): He was the 2nd unit director and has a longtime working relationship with Verhoeven.

“Analog with Peter Kuran and Kevin Kutchaver” (HD, 13 minutes and 10 seconds): The two men talking about how effects were done in the pre-CGI days.

“More Man Than Machine: Composing RoboCop” (HD, 12 minutes and 4 seconds) plays like a tribute to Poledouris, with some contemporary talking heads discussing his work here.

“RoboProps” (HD, 12 minutes and 50 seconds): Julien Dumont, who owns a number of props from the series.

“2012 Q&A with the Filmmakers” (HD, 42 minutes and 37 seconds) is taken from a screening of the film at UCLA, with all the notables (minus Rob Bottin) in attendance.

“RoboCop: Creating a Legend” (HD, 21 minutes 12 seconds) focuses on the creation of the suit.

“Villains of Old Detroit” (HD, 19 minutes and 1 second) checks out Robo’s rogue gallery, which is full of unique characters.

“Special Effects: Then & Now” (HD, 18 minutes and 23 seconds) is another piece looking at the on-screen work.

A series of four deleted scenes (HD, 2 minutes and 52 seconds) are included.

“The Boardroom: Storyboard with Phil Tippett Commentary” (HD, 6 minutes and 4 seconds) shows planned visuals while Tippett talks about how they achieved the scene.

Two trailers, three TV spots, and three image galleries round out the features on this disc.

The audio commentary with Verhoeven, Davison, and Neumeier can also be found here.

The edited-for-TV version of the feature is included, with numerous alternate lines, takes, etc. A bonus feature – “RoboCop: Edited for Television” (HD, 18 minutes and 35 seconds) – offers up those alternates in one place.

Arrow has produced two editions this time around: a limited edition, featuring the same contents as the limited edition Blu-ray, housed in a sturdy slipcase with an 80-page booklet, six postcards, a double-sided poster, and reversible cover art; there is also a steelbook (which I received) that has only the booklet but does look gorgeous in person.

Packed with content and featuring the sharpest home video transfer yet, Arrow has produced the ultimate RoboCop package for fans. Their previous limited edition may be enough to satisfy most but for those who want the best in a/v quality there’s no question this deserves a space on your shelf.