‘Umma’ Proves A Mother’s Love Can Be Deadly [Review]

Fight with your mother. 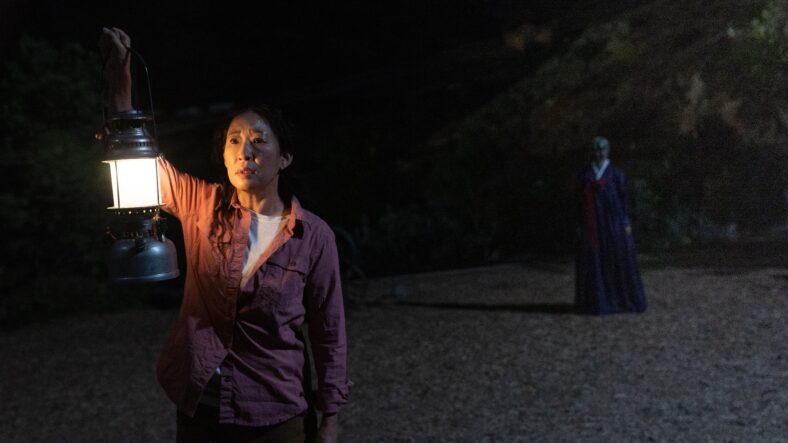 Umma probably isn’t the style of horror most people who saw the trailer are expecting. However, it is the kind of horror that tells a lot of us what we need to hear. Writer-director Iris K. Shim’s film is focused on the complex mother-daughter relationships that haunt a lot of us instead of traditional scares. How generational trauma manifests for each of us is the real ghost story at the heart of this film.

Amanda (Sandra Oh) and her teen daughter Chris (Fivel Stewart) live on an isolated farm. They are seemingly the coolest duo living in the creepiest house you would ever want to meet. Amanda believes electricity makes her sick due to her childhood trauma. So their house has no power and neither of them has cell phones. They rely on their friend that sells their honey, Danny (Dermot Mulroney), to handle the internet component of their business. Amanda doesn’t go into town to avoid the electricity. Amanda and Chris seem happy being so far away from others until Amanda’s distant uncle (Tom Yi) tracks her down. He’s come to inform her that her mother has died and to bring her the ashes and possessions. This rattles Amanda who has seemingly turned her back on her family and parts of her cultural identity. This is also how the spirit of Umma (MeeWha Alana Lee) begins to wreak havoc on Amanda’s quiet life.

Oh delivers an award-worthy performance, as expected. Amanda is the embodiment of so many of us who still carry emotional scars because of our moms. We find ourselves empathizing (and relating) with her as the things she ran from catch up with her. Her past proves that she can never truly have peace until she faces it. Only when she extracts the parts of herself that she’s locked away alongside her unprocessed trauma can she really be the best version of herself. This movie is the ultimate reminder that you can run but you can never hide. That’s the real kind of psychological fear that keeps some of us up at night. As her umma begins to invade her space and person, it all begins to bleed into her relationship with Chris. As Umma’s trauma attempts to trickle down to another generation, it also makes it increasingly harder for Amanda to conquer her most terrifying fear: becoming her mother.

I wish I could tell you that Umma is a perfect film but no movie is. This one has questionable CGI, and there were some places where cuts would’ve helped move things along. The PG-13 rating means it’s not going to be able to give us everything we might crave from this sort of movie. However, that rating means kids can see it when they’re figuring out parents are just real people with real problems. It also gets to be the gateway horror movie about Korean-American women that aren’t reduced to stereotypes and side characters. Umma is a fine genre entry about familial trauma and it’s okay that’s it’s fine. Most movies are fine until they find the people they resonate with. This one resonates with me, and I imagine a few other daughters as well.

The movie offers a lot to those of us that want to receive it. The big battle isn’t flashy, nor is it perfect, but it’s what needs to happen for everyone involved to move on. It’s the only ending for a movie that’s mission is to mine the complicated realization that your parents failed because failure is human. It also drives home that you own everything that happens to you but are always brighter than your darkest moments. Umma isn’t here to make excuses on their behalf or encourage you to call your mom. It’s a film that’s here for you wherever you are in your journey to forgiveness or distance. Umma is a reminder that like everything else in life, these relationships are tricky but that you owe yourself closure. However, what that closure looks like is entirely up to you.

Let me know if you’re planning to catch this movie in theaters @Misssharai.

Umma is the kind of movie that makes you want to call your therapist. It reminds us that life is messy, but fine, and has a greater meaning that often eludes us.