'The Medium' begins as a slow-burn possession story but eventually erupts into a gruesome demonic odyssey. 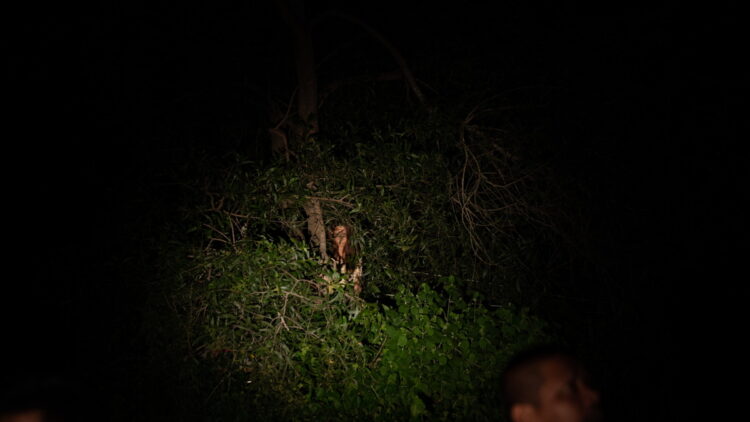 For believers in animism, spirits are everywhere. They’re in each of us, in the birds overhead and the insects underfoot, in the rain and the sun. They’re in the trees, in the rocks, in the rivers, in the very ground on which we walk. Everything has a distinct spiritual essence. But not all spirits have good intentions. Helmed by Banjong Pisanthanakun and set in Isan, the northeastern region of Thailand, The Medium begins as a slow-burn possession story but eventually erupts into a gruesome demonic odyssey.

It’s markedly different in tone from the director’s contribution to the 2012 anthology The ABCs of Death, in which a bird amusingly discloses its master’s infidelity. By the time The Medium’s fearsome finale gets underway, you’ll be praying for a parrot to waddle onscreen and lighten the mood.

With its themes of shamanism and spiritual warfare, this pseudo-documentary covers similarly sacred ground to co-producer and co-writer Na Hong-jin’s sprawling South Korean epic The Wailing. Those that found the 2016 film unwieldy and unsatisfying can rest easy; The Medium is more direct, more concentrated and, for better or worse, its threats more clearly defined.

Things are mostly calm for the first hour or so. The documentary team meets Nim (Sawanee Utoomma), a village shaman who serves as the physical host for the benevolent goddess Ba Yan. We learn through interviews with Nim that Ba Yan has worked through her family for generations. She assumed the role after her sister Noi (Sirani Yankittikan), the intended host but now a Christian, refused it.

Here at its mildest and most lyrical, The Medium approaches the karmic inquiries of 2010’s mystifying Uncle Boonmee Who Can Recall His Past Lives. It juxtaposes Isan animism with Christianity and small-town Thailand with neon nights and city living. Drop into its early stages unaware and you’d be forgiven for taking the film at face value as a well-made doc on Thai spiritual practices. But it’s not long before you’re shaken out of that stupor.

With Noi’s daughter Mink (Narilya Gulmongkolpech), a modern woman and non-believer, now undergoing the same symptoms that she and Nim did during the early stages of their own bewitchment, it looks as if Ba Yan wants to continue the familial tradition with Mink as her new medium. But as Mink’s behavior becomes increasingly aggressive and unusual, Nim fears that something more menacing has gripped her niece.

There’s no ominous voice modulation and no skittering about on ceilings here. The Medium manages to be nerve-racking without much in the way of special-effects trickery. Many of the frights come instead via shocking spurts of violence as Mink flits in and out of her fugue states. There are, of course, the obligatories: the menacing head tilts, the crawling, the demon-driven laughter. Even effective possession movies are slaves to the tropes. But The Medium works thanks to passionate performances from the entire cast. Utoomma and Yankittikan especially bring emotional depth to Nim and Noi, respectively. But it’s Gulmongkolpech as the tortured-cum-torturer Mink who steals the show, slinking, swaggering and sleeping around with unnerving conviction.

Just as in Pisanthanakun’s 2004 feature debut Shutter, the director plays with in-camera perspectives. The camera is not so much a storytelling device here the way it is in that film. But with The Medium unfolding via the in-camera POV of the documentary team, Pisanthanakun is able to employ all the requisite techniques – close-quarters jumpscares, hectic shaky-cam getaways, night-vision surveillance – to fruitful effect.

As the film’s nefarious spirits really sink their teeth into Mink, Nim and a team of shamans prepare for an exorcism. Meanwhile, the documentary team shows Mink’s family some footage of the unsavory antics she gets up to while they’re asleep, which leads to some of The Medium’s most taboo-shattering moments.

Related: ‘They’re Outside’: Exclusive Trailer Shows Off A Terrifying Mix of Found Footage and Folk Horror

It all builds up to the black vomit and sensory oblivion of the cleansing ritual – a triumph of production design to rival that of The Wailing – as the shamans try to rid Mink of her tenants. Here, the film smartly splits up its main players. This creates two parallel sequences of tongue-gnawing intensity. They then fuse together to horrendous effect as the fiends very much take over the asylum.

You might argue that The Medium loses its way as it strays from its more restrained depictions of possession and into pulp territory. Pisanthanakun’s latest can also be viewed as a typically conservative story about the dangers of rejecting religion and the monstrosity of female sexual maturity. But it makes up for its tired attitudes and lack of restraint – if these are things that must be made up for – with its climactic commitment to all-out mayhem.

The Medium doesn’t wear its length quite as well as The Wailing, nor does it hit its chilling, cerebral heights. But at its best, this is a pulverizing possession yarn whose crescendo should put rictus grins on the faces of genre-lovers.

Beyond its ferocious finale, though, there lies something even more disturbing; the suggestion that our beliefs in benevolent spirits aren’t enough to save us from the world’s omnipresent evils.

The Medium doesn’t wear its length quite as well as The Wailing, nor does it hit its chilling, cerebral heights. But at its best, this is a pulverizing possession yarn whose crescendo should put rictus grins on the faces of genre-lovers.