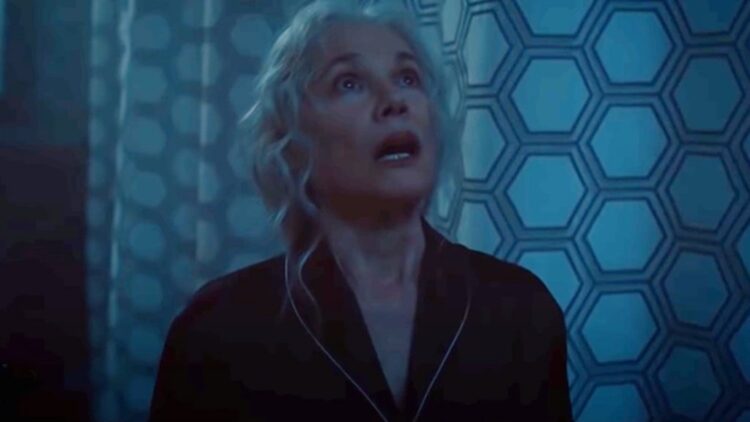 Axelle Carolyn has made quite the name for herself in recent years. She conceived the original idea for the anthology, Tales of Halloween and she has since gone on to direct episodes of American Horror Story: Double Feature and The Haunting of Bly Manor. And I am happy to say that the director’s winning streak continues with her most recent turn at the helm, The Manor. The Manor is a suspenseful and exciting ride that dares to be different. Writer/director Carolyn demonstrates a knack for building and maintaining tension and serves up a compelling cast of characters that are easy to invest in.

The Manor sees Judith (Barbara Hershey) move into a care facility after experiencing a stroke. While it’s difficult for her to say goodbye to her family, Judith finds it even more challenging to shake the feeling that something sinister is going on at her new domicile. She sees and hears things in the night. Her belongings go missing without explanation, and the administration keeps the entrance to the building locked. Could her concerns be part of the aging process, or is something seriously wrong?

Breaking from convention, The Manor features a leading lady over sixty. Refreshingly, Judith isn’t pigeonholed into being the nurturing, grandmotherly type who exists only to advance the story arc of younger characters. Judith is the star of the show and she comes across as authentic. It’s sad to think that Hollywood can be quick to treat anyone over a certain age as if they couldn’t possibly have a story to tell. But Carolyn dares to present a dynamic and empathetic character of a more advanced age.

Barbara Hershey kills it in her turn as Judith. The veteran actress makes the character multidimensional. Yes, Judith is a grandmother, but her entire identity isn’t tied to that one piece of her existence. Accordingly, I appreciate the fact that she isn’t afraid to use some spicy language when it is called for. Hollywood often seems to take the stance that as people age, they revert back to childlike innocence and abstain from bad language or any kind of ‘questionable’ habits. But in reality, that is rarely the case. Judith even explains to her grandson that she’s allowed to swear at her age because she’s earned it. And that’s the truth. Getting older shouldn’t mean that you have to turn into someone you’re not.

Aside from three-dimensional characters, I was also impressed with the film’s sharp commentary on the way we, as a society, worship youth and fear getting older.  That’s not a subject I can recall a staggering number of horror films tackling but given that the horror genre is a safe place for us to face our fears, I think it’s something more scary flicks should tackle.

Many of us go through life trying to eschew thoughts of aging. But thinking about the impermanence of life and putting our own mortality into perspective comes with a certain catharsis and I commend Carolyn for tackling the subject in a way that gives the audience pause to reflect on an uncomfortable, yet important subject.

Subtext aside, I want to dive into the film’s ending a bit. A lot of filmmakers seem to give into pressure from financiers or studios to deliver an upbeat conclusion. But Carolyn didn’t do that. She shopped her script around until finding a distributor that would allow her to stick to her guns. And I respect that. The ending the audience sees is the right conclusion for Judith. And I enjoyed that it was a bit dark. I also appreciated that Carolyn didn’t feel the need to hit us over the head with a morality lesson. Closing out with a special message works fine for sitcoms. But when making a horror movie, a filmmaker shouldn’t feel obligated to tie everything up in a neat little package. Life is messy and art should imitate life, when appropriate.

Carolyn’s latest feature offers up some fantastic scares. It is dripping with atmosphere and kept me in a constant state of suspense. Since Judith is well-developed and easy to relate to, I found myself very invested in her plight. I suspect other viewers will have a similar reaction.

But you don’t have to take my word for it: The film will be available to stream on Amazon Prime beginning October 8th as part of Welcome to the Blumhouse!

Axelle Carolyn continues her winning streak with an atmospheric and heartfelt tale that speaks to the fear of growing old.