Fantastic Fest Review: ‘V/H/S/94’ is a Total Blast From Start to Finish

With its balance of technical wizardry and funhouse fright, 'V/H/S/94' earns the right to be ranked high among its series' best entries. 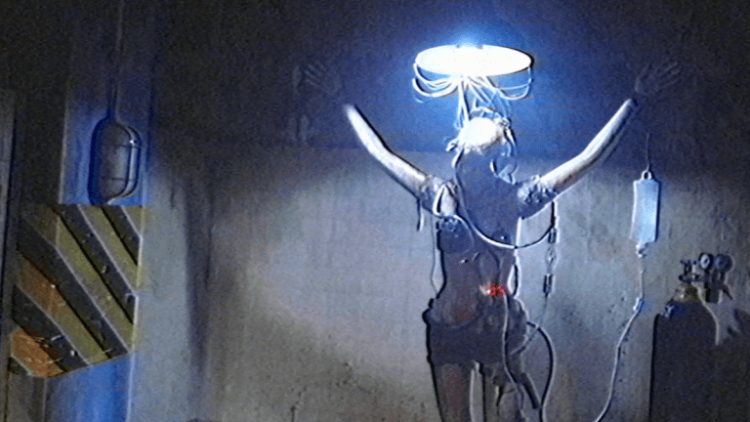 Your favorite off-the-wall horror anthology series is back with its fourth (and final?) installment, V/H/S/94, just in time for Halloween.

At its world premiere last night at Fantastic Fest, every director was in attendance except for Timo Tjahjanto (May the Devil Take You), who reportedly just wrapped up his segment a few weeks ago. Producer Josh Goldbloom also took to the stage, telling audiences how V/H/S/94 was suddenly left without two of its directors—David Bruckner and Radio Silence—after they left to take over the Hellraiser and Scream franchises. Series newcomers Jennifer Reeder, Chloe Okuno and Ryan Prows quickly came on board to join forces with Simon Barrett (The Guest, Seance) and Tjahjanto. The result is the most consistently thrilling group of shorts since the original V/H/S hit screens back in 2012.

Usually regarded as the most difficult directing challenge, Jennifer Reeder took on the wraparound segment that loosely connects all of the stories. “Holy Hell” follows a videographer documenting a SWAT team’s drug raid inside a mysterious warehouse. They uncover a strange group of cultists on the verge of death hovering around a collection of VHS tapes. As each cassette plays, the officers glaze over into a trance-like state, only to realize eventually that they’re part of a larger plan.

Symbols of the occult, found peppered throughout the other stories, offer a few clues that are explained in an all-too-quick reveal in the final minutes. Reeder has the most thankless gig, considering that the bookends of the anthology structure are rarely compelling, and are mostly there to provide an in-and-out point to each director’s vision. If there’s a fifth entry of this ongoing series, seeing what Reeder could do with a segment of her own would be more than welcome.

Also Read: Use Our #MonthOfDread Calendar to Program a Horror Movie Anthology Marathon

As it stands, “Holy Hell” works fine, but it could’ve used a little more finesse and a more shocking ending, especially with all the insanity of the other entries it’s forced to follow…

Choosing the first installment is always a crucial decision, and having Chloe Okuno’s subterranean adventure, “Storm Drain,” kick things off was the right move. An opportunistic local TV reporter investigates strange sightings of a Rat Man down in the town’s sewer tunnels. Spooked by a militant citizen armed with an assault rifle, the reporter and her cameraman venture a little too far into the bowels of the city in search of the truth and, hopefully, a Pulitzer.

What seems like a nod to Marc Singer’s mole people documentary, Dark Days, actually becomes a traumatizing ordeal that uncovers something much larger at play. In a definite homage to The Howling, the ending of “Storm Drain” wants you to think about Dee Wallace for a second, only to completely subvert that expectation with some hilarious gore.

This segment from Barrett, who returns to the franchise after V/H/S/2, would also fit nicely into the world of Tales From the Crypt or The Twilight Zone. “Wake” takes place overnight at a funeral parlor housing a dead body that may not be entirely dead. Maybe it’s just post-mortem flatulence moving the coffin? …No, it’s not.

In an often hilarious use of VFX work that suits Barrett’s sense of humor, the re-animated corpse almost becomes two separate characters working together to scare the living daylights out of a poor funeral home employee. “Wake” is a terrifying tale that could easily be found in the pages of EC Comics, and its tasteful amount of CGI prepares viewers for the POV visual effects extravaganza unleashed in the segment that follows.

“The Subject,” Directed by Timo Tjahjanto

What is wrong with Timo Tjahjanto? Whatever wires were crossed inside the Indonesian director’s brain that gave birth to such a gloriously twisted imagination will hopefully keep misfiring, God willing.

Tjahjanto’s “The Subject” takes the mad scientist set-up to extremes when a kidnapped woman slowly comes to realize the monstrosity she’s been turned into. She’s one of many subjects tortured and mutilated in a mash-up of flesh and metal, and the real horror comes from just how human she still is.

When cops come bursting in on the macabre operating room, they awaken a bevy of surgically enhanced cyborgs, including an unstoppable bodyguard with a giant blade for an arm. Heads roll, bullets fly, and blood spews in a rousing and gory display of first-person action that’s rarely, if ever, been seen on-screen to this extent. “The Subject” is the clear standout of V/H/S/94, even if it feels like it lives in Tjahjanto’s own gruesome universe.

The luchador crime movie Lowlife was a festival hit a few years ago and put Prows on the global map. Here, he directs the final segment of V/H/S/94, “Terror,“ which takes us into the backwoods of America and shows just how much range he has.

Inspired by the planned kidnapping of Michigan Governor Gretchen Whitmer, a group of homegrown terrorists train for an attack involving a very different kind of suicide bomber. The “creature” they’re keeping as their secret weapon forces them to follow a weird set of rules. (If there’s a coherent mythology explaining what this thing is, I really want to know.) Unsurprisingly, the plan these idiotic pseudo-soldiers have goes horribly wrong and their precious weapon gets triggered way too early. “FUBAR” doesn’t even begin to describe the ending of “Terror.“ Although “The Subject” is on some next level insanity, Prows comes pretty close to topping it.

The funny thing about V/H/S/94 is that it really has nothing to do with the 1990s. It’s likely that it’s only set in that decade because the ’90s have had a recent resurgence in our pop cultural consciousness. From a creative standpoint, future titles could use another year in the VHS era if the series were to continue. But just giving these directors a platform to do whatever they want is reason enough for me.

The wraparound device may have run its course though… unless the found-footage gimmick inspires a horror host to intro each story—a Crypt Keeper of sorts, but one who wields a handheld camera. It could also be interesting to explore a wraparound modeled after the classic train car set-up from Dr. Terror’s House of Horrors.

As it stands, V/H/S/94 can’t overcome that initial excitement when the first V/H/S took found footage into a more daring, modern direction. Putting this installment second just over V/H/S/2 is more than fair, mostly due to the strength of every entry here. There’s a great balance of technical artistry and funhouse fright that keep the momentum building through every story. V/H/S: Viral effectively ended the streak with the low point of the series, but Nacho Vigalondo’s trippy alt-universe addition Parallel Monsters deserves its due. The second-best of the series, V/H/S/94 serves as a great calling card for each one of these directors and drums up excitement for what comes next in their increasingly bizarre careers.

V/H/S/94 had its world premiere on Sunday at Fantastic Fest 2021. Visit the festival’s website for more info.

In a welcome return, V/H/S/94 hits the same high notes as the original entry and even has some new twists and turns of its own.