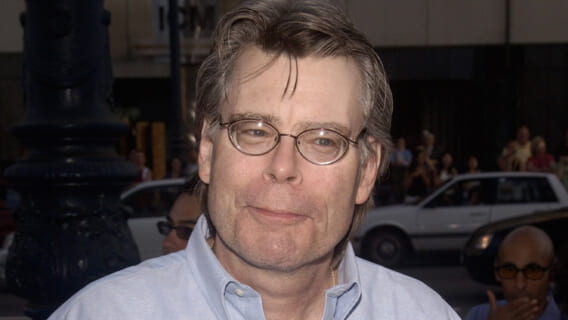 Uncle Stephen King has a history of solid recommendations because he knows the genre better than most of us. This is why we find ourselves looking into his suggestion to check out an AppleTV+ series many of us missed last year. Shining Girls ran for eight episodes on the streamer and Uncle Stephen was having a damn good time as a viewer. See his thoughts below.

If Stephen King says something is scary then it’s reason enough to hit play. However, while looking further into Shining Girls, we found even more reasons to stop what we were doing and dig up our AppleTV+ password.

In the show, newspaper archivist Kirby Mazrachi’s dreams of becoming a journalist are put on hold after she survives a brutal attack that leaves her in a constantly shifting reality.

Watch The Trailer For Shining Girls

Shining Girls is based on the book of the same name written by Lauren Beukes. The television adaptation was created by Silka Luisa. It stars Elisabeth Moss, Wagner Moura, Phillipa Soo, Jamie Bell, Amy Brenneman, and the one and only Erika Alexander.

Because there’s no word still no word on season two it’s not looking good for Shining Girls. However, it takes place in Chicago so I feel obligated to root for it until I get around to watching and seeing how I really feel about it. I’m always excited to see scary media in that section of the Midwest. Plus Uncle Stephen called it scary so it feels right.

Did you watch Shining Girls last year? Are you as into it as Stephen King? Would you be interested in a second season? Let me know at @misssharai.