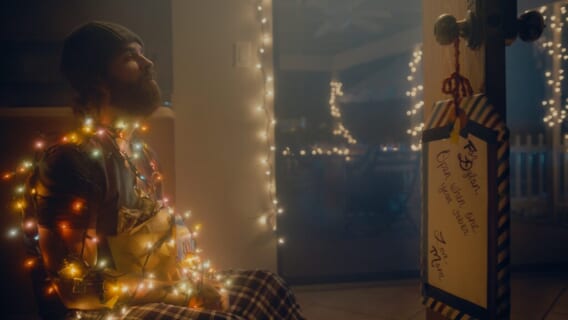 In the summer of 2022, I had the privilege of doing the Q&A for the theatrical premiere of Shane Brady’s feature film debut Breathing Happy at Popcorn Frights in Miami. The only problem was, I was crying so much by the end of the movie that I could barely gain my composure to speak in front of an audience. His tale of addiction was one of the most touching and complex representations I’ve ever seen on screen. Never overly saccharine or heavy-handed with a message to push, Breathing Happy is a Christmas feel-good (maybe?) film. And I was glad to catch up with Brady and producer Emily Zercher to chat about the movie again when we weren’t all crying.

But before that, check out the full synopsis of Breathing Happy:

Recovering addict Dylan (Brady) is ready to celebrate one year of sobriety on Christmas Day. Before the clock can strike midnight, his past demons tempt him to fail, in the form of a talking golden door, his ex-drug dealer, and magic tricks.