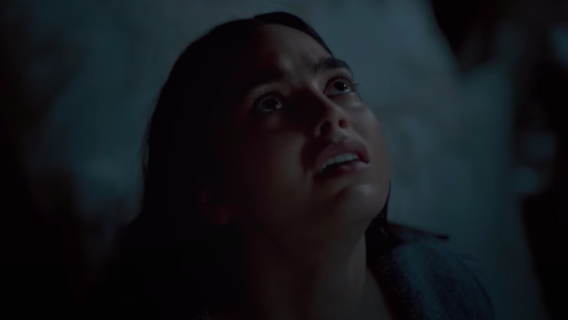 In the new film Bed Rest, director Lori Evans Taylor tackles the difficult, yet important, issues of pregnancy loss and grieving that loss. While the horrors of pregnancy are often depicted in horror, struggling with the loss of a baby is a seemingly more taboo topic not tackled in the genre. Fresh off Scream (2022), Melissa Barrera stars in the film as a woman who, while pregnant, is also grieving the recent loss of her first pregnancy.

After years of struggling to start a family, Julie Rivers (Barrera) is pregnant again and moving into a new home with her husband as they embrace a fresh start. Upon being ordered to mandatory bed rest, Julie begins to slowly unravel as she suffers through the monotony and anxiety of her new constraints. Soon, terrifying ghostly experiences in the home begin to close in on Julie, stirring up her past demons and causing others to question her mental stability. Trapped and forced to face her past, and the supernatural, Julie fights to protect herself and her unborn baby.

Dread Central: What attracted you to Bed Rest?

Melissa Barrera: I think the first thing that attracted me to the project was the idea of working with Project X again. I was shooting Scream (2022) with them at the time and they pitched me this movie. They said, “We wanna send you the script because we think you’d be great for it. And we’ve been wanting to do it, it’s super special.” So they like sold me on it. I thought if I can work with people that I know and love, that’s what I wanna do. So they sent it to me, and then I read it in my trailer waiting between setups and I was weeping by the end. I was uncontrollably crying and I was thinking, “this is a thriller horror movie. I’ve never ever cried like with a genre movie before.”

Bed Rest feels different and special. And I thought if I can make people feel this when they’re watching the movie at the end, then I think it’s something that I, that’s worth doing. So that’s, that I was pretty much sold in that moment.

DC: It’s really refreshing to see a topic like pregnancy loss and the grief of that presented in such a way on screen. And I wanted to hear more about it. What was it like portraying this character and getting into this headspace of Julie in both being pregnant, but also coping with child loss?

MB: Thank you. Thank you. That means a lot. For me, it was very important to give visibility to this topic that feels so taboo. I think women are just expected to bounce right back and continue to live their lives. There’s a line in the movie where the character of Delmy, the caretaker, says, “women have been carrying the burden of grief.”

It rang so true to me. And I know that this is a personal story for [director] Lori Evans Taylor. She was brave enough to share it and smart enough to hide it in a supernatural, thriller. It just gave it so much depth to me. It just felt important. I always try to pick projects that feel urgent, you know, “why are we making this movie now?” And I think [with Bed Rest] no one has before, you know? I feel like women have been dealing with grief and child loss forever.

And no one ever talks about it. The metaphor that Lori created of being haunted by it felt so real. It punched me in the stomach when I realized that’s what she was doing. I just thought, I just thought it was, it was a beautiful way to tell that story.

DC: This is also your first time producing a movie and having a producer credit. What was that like for you?

I got very lucky that Project X trusted me to become a partner with them. I had always wanted to be a producer.

I had learned as an actor that when you’re just an actor, you really have no say in what the final product is. You go in, you do your job, you say your lines, and you do your best. You bring in a performance, but then in the editing room, they can completely turn and turn it into something different. Then you have no say into the message that finally makes it out into the world. So in the last few years, it had become an increasingly difficult thing for me to deal with, the idea of not having a say.

And so I was like, “I want more creative say in the stories that I’m putting out there with my image and my faith and my voice.” I’ve always known the power of film and television, the power that it has on the way that people think, and the ability to change people’s minds and hearts. I’ve always wanted to have a little bit more of a say and follow through with the projects that I’m in.

When this opportunity presented itself, and because I got involved so early on, I got to work on the script with Lori. They said, “we want you to be our partner”. Since we have a close relationship as friends, they took me under their wing and they taught me everything. So it was also a very educational experience. Going on to my next projects that I’m producing, I feel very prepared.

DC: Can you tease anything that you’re working on? Or is that all hush-hush?

MB: Oh, I have so many things that I’m working on. I’m so excited, but I can’t talk about them. But I think you’ll find out soon because I think a few of the announcements will happen if not at end of the year, then at the beginning of the next. So I’m excited. I have some television things that I’m doing. I have some other films that I’m also producing and starring in. But honestly, I don’t wanna produce exclusively things that I’m in.

[I want to] branch out and also help produce other projects. Not necessarily for me, but to give other people opportunities.

DC: That’s so cool. Has being in films like Scream and In the Heights really given you that fire to get more involved in the producing space?

MB: Yes, 100%. And I’ve also always been lucky that in those big projects, I’ve gotten very close with the producers. I’m always that actor that when I’m not on set, I’m at Producers Village, talking to them, hearing stories, seeing how they interact on a set, what their job is on a set. So I’m like a little sponge all the time. I’ve had the good fortune of working with good people, too, that always are willing to teach me. I think when you work with good people, it’s inspiring and you wanna follow in their footsteps. I think that’s happening to me. That’s why I wanna become a producer and eventually direct, too.