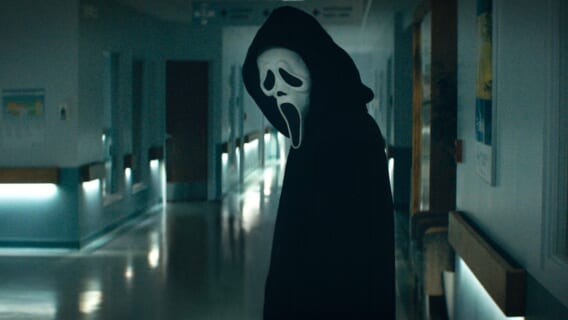 2022 has been a remarkable year for horror. I watched over 100 new horror releases, logging them furiously on both IMDB and Letterboxd, totally uncertain of how I was going to whittle the full swath of remarkable releases down to just 10. It’s almost innately unfair, with genre existing in so many different forms and sub-categories, it can be difficult to compare one to another. What makes one thing better than another, especially when those two things are attempting to accomplish entirely different things?

I tried my best, however, narrowing a year of remarkable releases down to just ten. Festival releases such as the remarkable Huesera and the terrifying Holy Spider—the official Danish entry for Best International Feature Film—are ineligible on account of not yet being widely available. Others, such as Decision to Leave, don’t quite qualify as horror, though Park Chan-wook’s latest is one of the year’s best. So, with that in mind, here are my picks for the top 10 horror movies of 2022.

Bones and All will break your heart, spit it out, rearrange it, eat it again, and digest it as you watch through tears. Heartbreaking yet curative, intimate yet remarkable in scale, Luca Guadagnino’s adaptation of Camille DeAngelis’ novel is a ferocious road movie with a sprinkling of rural, King-esque horror to augment its painful, truthful beating heart. Taylor Russel is a revelation, Timothée Chalamet will break your heart, and Guadagnino, against all odds, finds the humanity in human flesh. It’s a tender, Grand Guignol exhibition of the ties that bind.

Piggy is anchored by an exceptionally empathetic performance from star Laura Galán. Galán stars as Sara, a bullied, overweight girl in the Spanish countryside whose life is thrust into turmoil when, after suffering a particularly vicious attack, she witnesses a serial killer driving off with several of her tormentors. Torn between telling the truth and protecting herself, Sara’s life slowly unravels.

The pressure at home is waiting to burst, and not a single person in town—not the cute schoolboy, not even her own parents—is capable of seeing her as anything beyond means to an end. She exists as an idea, something to either torment or feel sorry for. As the blood spills, sticky and hot in the waning sun, Sara comes into her own. It’s a disturbing character study, one that both works on the surface genre level (Piggy is very, very scary) and as a profoundly humanistic experience.

X might not have been the earth-shattering slasher revival it at first appeared to be, but that’s simply because Ti West was saving his very best for Pearl, a technicolor descent into madness, a yellow brick road trek into the roots of madness and sequestration. Mia Goth is simply transcendent as the titular star. Desperate to dance and make a name for herself, Pearl explores how X’s homicidal maniac came to be. The blood is just as syrupy red as ever, the set design could sustain an entire week’s worth of content for One Perfect Shot, and, for all the violence, Pearl understands the trauma of a fractured mind better than most, treating it with the delicate (and delicatessen per a final act tableau) care it deserves. Pearl is 2022’s most ferocious theatrical release.

Virus:32 doesn’t reinvent the zombie genre quite as aggressively as the likes of Train to Busan, though what Gustavo Hernández accomplishes in his frenetic Uruguayan shocker is nothing less than truly remarkable. Conceptualizing the best of what survival horror entails, Virus:32 is a claustrophobic, unrelentingly tense outing. Balancing the pathos of human survivors with the gruesome terror of the infected, Virus:32 starts with a bang and simply never lets up.

Sometimes, the world is cruel. There’s no reason why people do the things they do. While Christian Tafdrup’s Dutch answer to The Strangers is a remarkably subversive interrogation of yuppie politeness, it’s merely there to mask the nihilistic violence of Speak No Evil’s third act. Things simply are. Violence simply exists. Sometimes it’s malicious, perverse, and arbitrary. There’s little else to take away from Speak No Evil. It’s impossible to shake.

Chloe Okuno’s Watcher is one of this century’s most disarmingly distressing fables of female fear. Maika Monroe turns in a career-best performance as Julia, a young woman who moves to Bucharest with her fiancé. Ambling about in her early days, often looking out the enormous picture window in their shared loft, Julia suspects someone has been watching her. With suffocating tension, slowly gestating violence, and an overwhelmingly austere, matter-of-fact filmmaking approach, Watcher succeeds both as scary cinema and a capsule of horrifying lived experiences.

Not simply this year’s best international horror movie, Incantation is one of 2022’s best horror movies, period. Kevin Ko’s Taiwanese found-footage opus is this generation’s Noroi: The Curse. It lingers in the marrow, infecting its audience with the curse of its distinct, viral terror. Empathetic, terrifying, and ingenuously crafted across multiple timelines, Ko accomplished something remarkable here, a movie that is fundamentally poised to shift the trajectory of found footage horror writ large.

Fresh is so much more than its viral status suggests. Sure, Sebastian Stan is irresistible as the simultaneously cute-as-a-button and frightening-as-Dahmer Steve, a cannibal and butcher serving the wealthiest around, but the entire enterprise truly belongs to Daisy Edgar-Jones. Effervescent as ever, even as her entire backside is removed as punishment, she’s a final girl to end all final girls. Romantic, funny, and genuinely disturbing, Fresh is how to do horror/comedy right. It’s beyond savory—it’s simply irresistible.

Nope is undoubtedly Jordan Peele’s most accomplished feat among a trio of accomplished feats. While it doesn’t yield the same inimitable relevancy as his Oscar-winning Get Out, Nope feels like the work of a classic filmmaker, the kind of early Spielberg anti-spectacle spectacle that deserves to stand alongside the greats, 2001: A Space Odyssey or Close Encounters of the Third Kind of genre cinema. Nope, though, is considerably more gruesome than either of those, and it is also a distinct product of its time that miraculously feels broadly relevant beyond the zeitgeist. It’s top-tier filmmaking, the kind of cinema that gets people excited about cinema. Genre or not, it’s one of the year’s best.

Scream 4 premiered with a complicated legacy. Beyond being seminal director Wes Craven’s final feature, it arrived ten years after the critically maligned Scream 3. In truth (well, my truth at least), that makes Scream 4 difficult to assess on its own, untethered from its complicated legacy. I liked it, likely even loved it, but there’s no denying that—finale aside—it’s the weakest of the franchise, a glossy, at times unfinished attempt to bring Scream to a new generation.

Where Scream 4 fell short, Radio Silence’s Scream reboot/sequel arrived to bring the franchise back on track. Second only to the original, that Scream exists, let alone succeeds, is itself a miracle. Bloodier, scarier, and more consequential than anything seen since Scream 2, it did to the slasher genre what Halloween (2018 first attempted. It made it fresh. It made it relevant. And, it made it cool again. In other words, Scream is the first time with Scream that the franchise has, per the original’s VHS box art, felt this funny, hip, and scary.

To rattle off some concise honorable mentions, I think Halloween Ends was the bold, wickedly weird jolt the Halloween franchise desperately needed. Idris Elba fights a lion in Beast and it’s even better than it sounds. Joko Anwar’s Satan’s Slaves 2 is the supernatural spectacle audiences need in a Conjuring-free cinematic landscape. Barbarian is, well, Barbarian. It’s awesome. Orphan: First Kill should never have been as fiercely fantastic as it is. He’s Watching is the perfect appetizer for the forthcoming Skinamarink. The Cursed is aggressively underrated. Lastly, Nikyatu Jusu’s Grand Jury Prize winner Nanny is this year’s premier horror debut.

What were some of your favorite films this year? Let me know on Twitter at @ChadisCollins. Was there anything I missed? Let me know. It’s been a great year for horror, so odds are, your list looks wildly different than mine. If nothing else, it proves just how lucky we are to exist in the present landscape of horror.