All hail the mutant grifter. 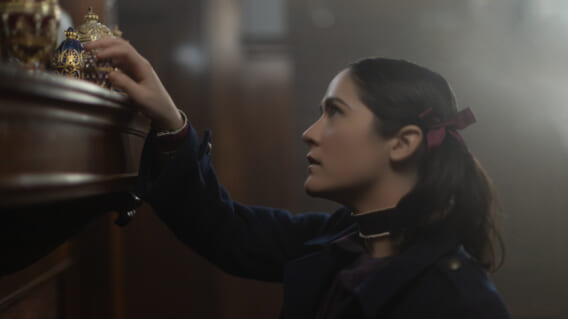 William Brent Bell’s Orphan: First Kill, written by Dave Coggeshall as a prequel to Jaume Collet-Serra’s stylish, wickedly twisted Orphan, is more than a simple cash-grab. Pitched as an origin story for the titular orphan, Isabelle Fuhrman returns as the homicidal Esther, glandular disorder and all. In the early goings, Orphan: First Kill feels like an accelerated retread of the first. She cons her way into a wealthy American family, this time posing as their missing daughter, Esther, after she escapes from the Saarne Institute in Estonia. At first, familiarity creeps in, and it’s incredulous that this was a story that needed to be told 13 years after the first. Yet, as the movie progresses, its true conceit comes to life. Resultantly, Orphan: First Kill is akin to a camp masterpiece, a movie so committed to its own lunacy, that it’s likely to be one of 2022’s most entertaining horror movies.

Without spoiling anything, Orphan: First Kill feels thematically similar to last year’s Malignant. James Wan’s return to horror was ostensibly one thing, only to pull the rug out from under its unsuspecting audience with a twist so profoundly out there, it became an irresistibly gory treat. First Kill is no different. When Esther arrives in the United States, the conventional beats are there. Matriarch Tricia Albright (Julia Stiles, an absolute delight here) remains skeptical, concerned by mounting evidence Esther might not be who she claims to be. Dad Allen (Rossif Sutherland) is like a puppy dog, bearded with wistful eyes, just happy to have his daughter home. Even before Esther starts cursing brother Gunnar (Matthew Finlan) out, he’s unusually hostile at the thought of her long-awaited return.

William Brent Bell exercises a metatextual awareness of audience expectations, something sorely missing from his last outing, 2021’s Separation. Gunnar compares Esther to Lizzie Borden, adding she’s akin to “some crazy chick who killed her parents with an axe.” Even Esther’s appearance— haphazardly concealed with lackluster makeup and forced perspective—is almost knowingly obvious. The trailers weren’t an illusion. Fuhrman looks nothing like a nine-year-old. Yet, rather than devolving into uncanny valley territory, William Brent Bell seems almost premeditatedly aware of how unconvincing it is, never letting it anchor a narrative more serious than patchy de-aging deserves.

And, wow, what a narrative it is. Midway through, Orphan: First Kill becomes a camp jamboree, the kind of movie Joan Crawford might have found herself in during her horror heyday. It’s a little bit Strait-Jacket, a little bit Trog, and heaps and heaps of fun. It’s spectacular, gooey camp, a movie where characters call Esther a “mutant grifter.” Esther slaps a key player, and they remark if she does it again, they’ll kill her. Esther pulls her hand back and slaps them a second time. In a climactic romp, Esther is driving a stolen car, sunglasses on, cigarette dangling from her mouth, singing as Michael Sembello’s “Maniac” plays on the radio.

For all the exaggerated narrative flourishes, however, Orphan: First Kill still manages to wring some genuine tension from the proceedings. Once all the pieces are in play, the script develops into a game of cat-and-mouse, with vacillating roles from moment to moment. It all remains ruthlessly self-aware, but there’s a grounded intensity to seeing how its foregone conclusion plays out.

Unsurprisingly, Esther escapes. How or why the house goes up in flames won’t be spoiled here. In the conclusion, Esther is ready for adoption by Vera Farmiga and Peter Sarsgaard. There remain some unanswered questions and confounding twists, principally with regard to how the developments here square with the original. Key beats are hard to reconcile with what we know, and frenetic editing doesn’t help.

Still, Orphan: First Kill is an extravagant indulgence. Its wit is sharp as a knife’s edge. It’s a bloody, rollicking foray into camp slaughter. It’s not the kind of movie fans weren’t necessarily expecting but will be thrilled to have. All hail the mutant grifter.