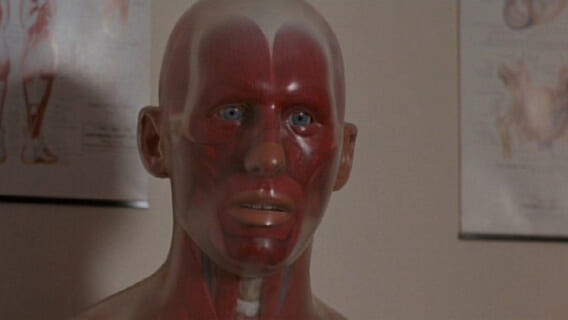 With a younger-skewing audience, it’s no surprise that TikTok users are often talking about disturbing movies from the last decade or so. And who can blame them? The 21st century has given birth to some of the most depraved and upsetting horror films in the history of the genre. But, that doesn’t mean bizarre films don’t exist earlier in horror. TikTok user mandymorgue87 has resurfaced the 1988 Canadian nightmare, Pin, and with over 200,000 views, it’s piqued the interest of quite a few people.

In Pin, also titled Pin: A Plastic Nightmare, Dr. Frank Linden (Terry O’Quinn) uses an anatomically correct dummy he named Pin to teach his children Leon and Ursula about the human body. Through ventriloquism, he uses Pin to interact and connect with his children. But, Leon becomes obsessed with the dummy to the point he convinces himself that Pin is real. Plus, Pin is his only real friend. Leon also witnesses a nurse have a sexual interaction with the doll, which further confuses him and has a lasting impact on his psyche.

As Leon gets older, his obsession and fixation on Pin only get more extreme. As his paranoia around his own mental illness grows, Leon gets more unpredictable and violent. It’s shocking, upsetting, and a strange look at the effects of trauma on the young mind.

Sandor Stern directed the film, but it wasn’t his first venture into horror. He also penned the screenplay for the 1979 original film The Amityville Horror. He also went on to direct another Amityville sequel in 1989.

Pin is based on the novel by  Andrew Neiderman, who penned it as the ghostwriter for VC Andrews after her death. Comments on the above TikTok make reference to the novel and how it’s, shockingly, more upsetting than the film. So if you’re looking for both a disturbing watch and read, Pin may just be the one for you.

David Hewlett and Cynthia Preston star in the film as Leon and Ursula Linden, respectively. Jonathan Banks of Breaking Bad fame provides the voice for Pin.

As of right now, Pin is only available to stream via YouTube.