Listen to Two New Terrifying Tracks From The ‘Winnie The Pooh: Blood and Honey’ Score [Exclusive] 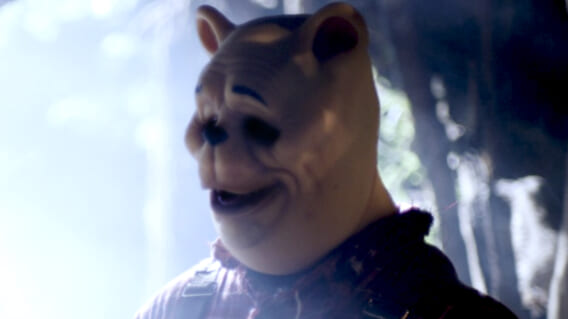 The internet is practically buzzing with anticipation for the upcoming Winnie The Pooh: Blood and Honey. How could we not? I mean it’s a beloved character going on a bloody rampage, complete with a giant hammer. With every new image, our excitement only grows. Today, we’re here to get you even more amped for the release with two exclusive tracks from the score, composed by horror maestro Andrew Scott Bell.

Earlier this year, Dread Central shared Bell’s behind-the-scenes video of the honey-comb-filled violin created by Tyler Thackray that Bell used to shape the film’s unique sound. Thackray is known for deconstructing these classical instruments and creating something new and innovative. Bell spoke with Dread Central about Thackray and said:

I was fascinated by this person and the way he thinks about music. Specifically, he and I share a passion for destroying long-standing musical traditions and rebuilding wild and fun creations from the rubble. I have this idea about music theory specifically that we should learn the rules so we can break them with intention. What I saw in Tyler was someone who was breaking things with intention. I loved it.

Now, we have two exclusive tracks that show off the work Bell has poured into crafting an epic sound for the horror film. This first track is bombastic and reminiscent of swarms of bees, thanks to Bell’s work with string instruments and use of booming brass tones.

The second track is much more playful and whimsical, much more reminiscent of the film’s source material. It transports you back to the beauty of the Hundred Acre Wood, then adds airs of mystery and suspense as deep notes infiltrate the delicate sounds of the track’s first half. Again, Bell uses strings to illicit the images of swarming bees. This isn’t your grandma’s Winnie The Pooh, after all.

So when can you see Winnie The Pooh: Blood and Honey? According to The Hollywood Reporter,

“Fathom Events is set to release the slasher horror — from director Rhys Frake-Waterfield — for a one-day event across hundreds of U.S. theaters on Feb. 15. Meanwhile, Altitude has acquired Winnie The Pooh: Blood and Honey for the U.K., Mexican chain Cinemex has plans to put it on several hundred screens and in Canada the Cineplex chain is releasing the film.”

What do you think of these exclusive tracks? Will you be checking Winnie The Pooh: Blood and Honey out in theaters? Let us know on Twitter @DreadCentral!