Constructing the Creatures of ‘Deadstream’: A Behind-The-Scenes Look 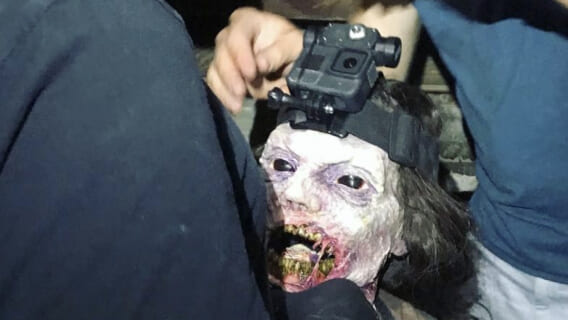 Deadstream, the feature directorial debut from husband-and-wife filmmaking team Vanessa and Joseph Winter, follows a disgraced internet personality who attempts to win back his followers by livestreaming one night alone in a haunted house. But when he accidentally pisses off a vengeful spirit, his big comeback event becomes a real-time fight for his life.

The movie features a ton of laughs, legitimate scares, and a cornucopia of creature effects. Here to fill us in on what into the making of Deadstream‘s characters is creature maker, Troy Larson.

“We knew from the beginning that we wanted a range of characters that weren’t standard “ghosts” but hinted at different backstories while keeping to a budget. While the Winters’ had some idea in the initial script in terms of the reaction they wanted from each scene, the hard part for me was balancing the comedy with the gore.

“One example is the ‘Parasitic Twin’. I did a lot of research on real birth deformities and any one of them alone was a bit too sympathetic and heartbreaking, honestly. I decided to add several of them together which pushed it past the realism into more of a caricature. We were only able to get 2 takes of the ‘Parasitic Twin’ before the boy (Jaxon) was overcome with heat exhaustion.

“Each character presented its own challenge on set. For the final scene with Mildred, I built a puppet head so the sharpened real butcher knife could actually be buried in her skull. I had to make two different versions of the clamp that held the knife in place but because of the slime and the sheer weight, it kept falling on me while I was underneath puppeteering.

“The ‘Bathtub Corpse’ was particularly difficult. The water that had been absorbed into the suit for the exploding head gag made it nearly impossible to get the pieces to stay together before each take. I had also underestimated just how heavy the suit would become once submerged in water. If it wasn’t for our awesome stunt performer (Ariel Lee), I don’t know if we would have gotten those shots.

Don’t forget to check out Deadstream, now streaming on Shudder!