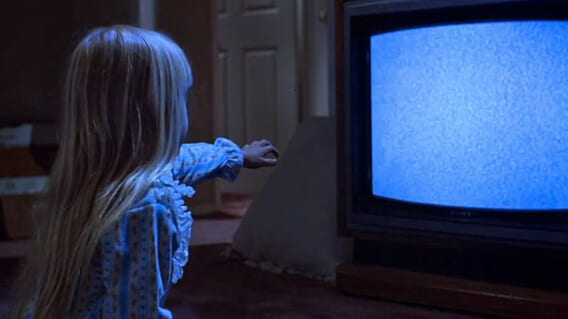 As horror fans, we don’t just watch horror movies during the spooky season. Every weekend is a chance to discover a new favorite or revisit a beloved classic. When October finally hits, there’s even more of a feeling of community because, suddenly, we’re all celebrating and trick-or-treating together. Once the decorations start hitting the local chain stores and scary tie-in commercials begin to flood the airwaves, that’s when it really starts to feel like Halloween is finally here.

Whether it’s the timeless eerie entries from major corporations like McDonalds and Coca-cola or campy local regional ads, watching some of the most clever Halloween commercials can feel as comforting as a warm blanket on a stormy night. Below, I’ve thrown together a retro round-up of some of my childhood favorites and a few new vintage discoveries. There’s a pretty epic, brand new commercial for 2022 highlighted as well.

We would all go to any year of Universal’s Halloween Horror Nights. The effects work from the haunt teams at Universal are legendary and always incorporate our favorite horror classics into their haunted houses. Halloween Horror Nights has commercials for every year they’ve been in existence and this is the best of the bunch. The Event Icon that year was the Crypt Keeper, Beetlejuice hosted a horror trivia game called The Price is Fright, and Bill & Ted hosted a Most Excellent Halloween Adventure. There was also a journey down into the bowels of the New York subway system called Transit to Torment. This particular ad is so special mainly because of the dancing kids and extras that are featured. There’s even a dude in a Rawhead Rex mask dancing the night away. It’s pure Halloween joy.

These Hormel Frank-N-Stuff chili hot dogs look disgusting. And we definitely want to try them. When these actually hit shelves in 1986, some parents complained that the chili stuffed inside the hot dog was severely burning their children when they ate them. These were probably microwaved at the time, so they were scorching hot AND radioactive. In my opinion, this was not the greatest creation of Dr. Frankenstein even if the actor playing the role in Hormel’s version of Mary Shelley’s classic tale says otherwise.

Starting in stark black and white, Dracula stocks a young ingénue. She’s probably named Mina or Lucy, most likely. Per usual, he storms in through a Gothic window and swoops in to terrorize and titillate. Luckily, Dracula’s prey has a can of Coke in a mini fridge that looks like ornate cabinetry. Dracula is intrigued. He takes a sip (a bite?) from the can. As the world becomes colorized, Dracula transforms into a strapping bo-hunk. The two lovers run off to go surfing or something. The best part of the commercial is a gargoyle that winks at us at the end. It’s true. You just can’t beat the real thing.

What if Frankenstein’s monster appeared on The People’s Court during the late 80s? A judge may not have ruled in his favor, admittedly. On the other hand, after examining the evidence, a sympathetic jury would have no choice but to decide to free the Creature on all counts. Unfortunately, mob rule still reigns supreme in this local Baton Rouge ad from NBC 33. Someone or something didn’t watch The People’s Court and the people are very, very upset about it. A courtroom drama featuring the classic Universal monster would be an interesting take though, wouldn’t it?

Does anyone remember these giant pens? There were numerous versions of them that hit shelves during Halloween for years. The gooey liquid inside the pen could definitely gross out your neighbors and trip out your friends. In reality, the only problem was the monster writer pen was a terrible pen and could barely be used to write anything. The monster liquid must have taken up all the room for, you know, the actual ink. The four-armed kid in this is inspired, however. I’m sure a lot of kids tried to recreate the illusion back in 1980. (These really remind me of the Dr. West syringe pen that came with the 2007 Re-Animator box set from Anchor Bay.)

Elvira always has to be on a best of list for Halloween commercials. No exceptions. This is a favorite for two reasons. It’s one of the few ads the Mistress of the Dark did in black and white. It’s also supporting PETA, a cause Elvira is still very passionate about. The political bent seen here makes it all the more rare in a season that’s usually only concerned with selling candy and plastic to children. That’s all part of the fun, of course, but give Elvira credit for calling attention to animal cruelty. By the way, the website Meatstinks.com isn’t active anymore. I checked.

I can’t imagine how long Vincent Price sat here doing Halloween-themed affiliate ads for local stations all over the country. Price did more and more of these commercials after the success of Michael Jackson’s Thriller. He was always bitter about not being paid more for his contributions in John Landis’ blockbuster music video, so he was probably trying to capitalize on his newfound fame as much as possible. This local ad was from WQYK in Tampa Bay, Florida. I love the hand that pops out of the trunk to give Vincent a bundle of AMC movie coupons. Maybe some kids used the discount to go see Stephen King’s Graveyard Shift which came out that year on October 26th, just in time for All Hallows’ Eve.

McDonalds new what kids wanted. Ronald McDonald was just a great salesman during Halloween, even if he was a fairly creepy clown all year round. These Halloween buckets were incredibly popular and fairly easy to collect unlike a lot of other fast food toys of the era. In the ad, Ronald McDonald seems to be lording over a batch of puppet monsters sentenced to hard labor in a a hosted factory. Actually, it looks like a pretty fun place to work. The three buckets feature a pumpkin, a witch (with a pointy hat lid!), and a ghost. They all glow in the dark, too. So, they worked as a pretty good night light as well as a candy container. Get all three while supplies last!

This one really has a punchline you can sink your teeth into. I totally remember this quick, cute Dracula commercial from Halloween in 1993. It has to be one of the cheapest commercials ever made since the screen is black the majority of its runtime. When the fade-in happens and we see just how a Count eats a Reese’s, it definitely cracks a smile. Candy commercials don’t pop up as much now in an era where health is promoted more than fun. I’m sure that makes for better habits for kids today. But this is one commercial that could be due for a remake.

The Rocky Horror Picture Show is going back on the road this season with Barry Bostwick in tow. That’s exciting news for fanatics of the musical and the stage show who long for interactive theater again. Rocky Horror is the quintessential rock musical of all time. It’s been celebrated the world over by DIY performers and artists who have a deep passion for the songs and the midnight crowds it ushers in. The Organic Theatre in Chicago was one of the longest running Rocky Horror troupes in the United States. This local ad from 1988 makes us wish we could do the time warp and jump back to the night this performance happened.

Honorary Mention: Upwork’s This is How We Work Now (Director’s Cut)

This new zombified Upwork commercial was just released and it’s an instant classic. The Director’s Cut is overly ambitious and surprisingly inventive. The premise follows an undead CEO who returns to the boardroom to tell all of his stuffy, old, and very white executives to start adapting to the new way of working. The CEO is a little reminiscent of John Forsyth in Scrooged, the dead mentor to Frank (Bill Murray) who comes back to terrorize him on Christmas Eve. This new Upwork commercial is probably going to be everywhere this Halloween and has the potential to break the internet.

A special thanks to all the nerdy YouTubers out there that take the time to upload all of these gems from old VHS tapes. Feel free to share some of your favorite memories of Halloween commercials with us on Twitter at Dread Central or let me know directly at DrewSTinnin!