Nathalie Emmanuel also did a lot of prep work to get into character. 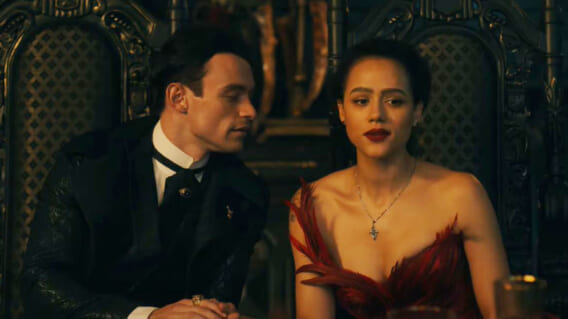 In director Jessica M. Thompson’s The Invitation, a young woman becomes entangled in a vampire coven. This is her take on the brides of Dracula, a revisionist look at where the brides come from and how they fall under the vampire’s spell. Nathalie Emmanuel of Game of Thrones fame leads the film as the unsuspecting young woman who becomes enamored with a wealthy, handsome man, played by Thomas Doherty, who has a taste for blood.

After the death of her mother and having no other known relatives, Evie (Nathalie Emmanuel) takes a DNA test…and discovers a long-lost cousin she never knew she had. Invited by her newfound family to a lavish wedding in the English countryside, she’s at first seduced by the sexy aristocrat host but is soon thrust into a nightmare of survival as she uncovers twisted secrets in her family’s history and the unsettling intentions behind their sinful generosity.

The Invitation stars Emmanuel and Doherty spoke with Dread Central about vampires, getting into character, and more.