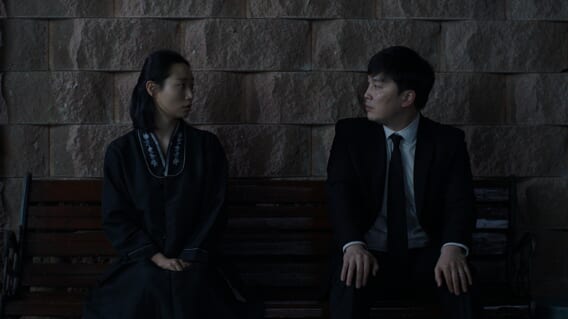 Seire nudges itself comfortably right at the intersection of superstition and modernity. Embellished with folk offerings and deeply trenched mythos, Seire is cryptic to a fault, though a wickedly oppressive atmosphere and scores of worthwhile performances render Seire a custom worth adhering to.

Park Kang’s supernatural chiller is a sort of cross between the parental horror of Rosemary’s Baby and the striking, austere dread of Hereditary. New father Woo-jin (Seo Hyun-woo) is a walking corpse, splitting his time between fatherhood, family, and work. Family is a conspicuous burden, especially since those closest to him are beholden to the titular South Korean custom of Seire. The family follows the rules for a 21-day-period following the birth of a new child. Parents adhere to strict restrictions, forbidding strangers from entering the home and keeping the child away from outside influences. Curious dreams and hallucinatory bouts plague Woo-jin. Still, he remains skeptical that Seire is anything but the vestiges of rural folklore.

Yet, when Woo-jin receives an obituary notice, he opts to attend, violating a cardinal rule. Simultaneously accessible and distant, Woo-jin is both audience entry to foreign customs and proverbial puzzle box himself. The funeral in question is Se-young’s, Woo-jin’s ex-girlfriend of six years. Her family says she simply died in an “accident”. Woo-jin himself is curiously enamored by the funeral proceedings, especially Se-young’s twin sister. Foreshadowed specters punctuate these early moments. The scares are on a low simmer with the promise of a forthcoming boil of terror. Nothing feels quite right. Even public spaces are claustrophobic and frightening, more akin to dreamscapes than popular urban streets.

From there, paranormal roots take hold, unspooling slowly on the periphery. Characters speak of broken customs with a hybrid of incredulousness and frightening earnestness. Woo-jin remains an ostensible outsider, mindful that something isn’t quite right. Yet, he is unable—or unwilling—to concede what it might be. He idles through life, looking both aghast and simply exhausted, and Hyun-woo adroitly balances concealment and transparency. Woo-jin is difficult to get a handle on, augmenting the mystery and Seire’s later scares. It’s an impressive performance, and Seire remains subtly engaging whenever he is on screen.

With nightmarish imagery and cryptic curses, Seire might seem well-positioned within the greater canon of South Korean horror offerings. Yet, while Seire certainly borrows trademarks and hushed, sinister beats, it’s considerably more patient. At times, Seire is oppressively slow, trading more in frightened visages and a slow tick of tension than outright horror. Even the culminating final act, where answers are revealed and mysteries solved within reason, has the kind of muted, implicit horror more akin to alleged elevated Western horror.

Resultantly, Seire is poised to be no less divisive than the sundry offerings A24 miraculously manages theatrical releases for. Unfurling in nightmares and bouts of uncertainty, breadcrumbs take shape into recognizable forms. But the full landscape remains somewhat obfuscated, certain to either satisfy or infuriate distinct sects of horror audiences.

That disquieting ambiguity does render the minutiae of Seire more frightening than it otherwise might have been, even if, at times, it commits itself a bit too much to the “rural customs are innately frightening” line of narrative progression. Yet, like a terrifying conception dream—those that foretell birth, common in some Asian countries—Seire easily takes hold.

With augurs of some untold evil on the horizon, Seire maintains frightening urgency, even if the distinct narrative beats idle their way through convention. It scaffolds bleakness, shifting from dead bodies, gory miscarriages, and messages from the deceased. While it doesn’t all coalesce into something worth more than the sum of its parts, Seire is a suitably dangerous and haunting ghost story.