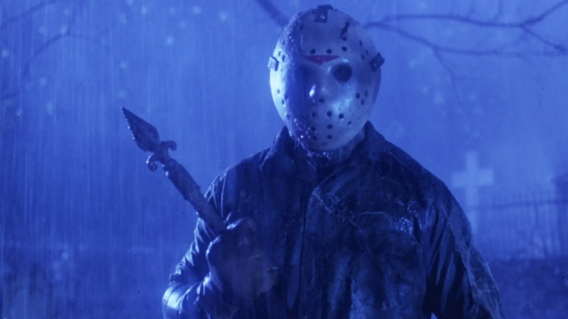 When Friday the 13th saw release in 1980, the team behind the project thought it would make a little money and that would be that. No one could have predicted the cultural phenomenon the property would eventually morph into. Now, Jason Voorhees (who appeared in the original only in flashbacks and as part of a final scare sequence) has become a household name.

Though a rights dispute has slowed the frequency with which new installments hit the local multiplex, an agreement has reportedly been reached and Jason will undoubtedly ride again once all of the legal gobbledygook is formally sorted.

Until the moment when our hockey-masked phoenix rises from the ashes (yet again), we thought it would be an interesting excursion to look back on the domestic box office performance of the existing series entries. So, without further ado, we present to you: The Friday the 13th franchises ranked according to box office yield!

It is heartbreaking to me that this whimsical, campy, over-the-top-in-all-the-right-ways sequel sits as the lowest-grossing entry in the series. I am a Todd Farmer stan and I appreciate everything he did with the script. The ruggedly handsome scribe was tasked with keeping the timeline from interfering with Freddy vs. Jason and he found a way to do that while lovingly sending up slasher tropes and the Friday the 13th franchise. Every time I revisit this flick, it puts a smile on my face. Accordingly, I long for a day when Jason X is given the respect it deserves. For more of my thoughts on that very subject, feast your eyes on this little number.

I won’t try to tell you that Jason Takes Manhattan is good. It isn’t. But I will try to tell you that it’s fun. Which other series installment features bitchin’ guitar licks? Hmmm? And even if it takes 75% of the film for Jason to get to the titular destination and we see very little of said destination, there is still something undeniably quirky and fun about the big oaf stalking the streets of New York.

Sadly, this was sort of the film that killed the franchise. Poor box office returns led to Paramount selling the rights (but not the Friday the 13th name) to Newline. Yet, that cloud had a silver lining because the relocation resulted in the criminally underrated Jason X and the crossover extravaganza, Freddy vs. Jason.

I recognize that this entry has its defenders. And I think that’s fantastic. We like what we like and shouldn’t be ashamed to admit it. However, Jason Goes to Hell: The Final Friday has never resonated with me. I appreciate that the film dares to be different. But it veered a bit too far off the beaten path for this camper.

I don’t necessarily count this entry as a well-made film. It’s flawed and silly. But I really like Lar Park Lincoln’s Tina. And while I think the telekinetic angle is a bit of a reach, I had fun with it; it brings a new angle to the series at a time when things were in danger of becoming repetitive. This installment is also noteworthy for introducing fans to eventual horror icon Kane Hodder as Jason.

The series’ sixth entry is a massive fan favorite. It closes out the Tommy Jarvis trilogy and serves up some great kill sequences. I’m a little surprised it performed as poorly as it did, in terms of box office yield. But some films take time to find their audience. And luckily, this Tom McLoughlin-helmed effort has come to enjoy the admiration it deserves over time.

This follow-up effort has the distinction of being even better than its predecessor. It’s a shame it didn’t return a larger yield at the domestic box office. But it’s great to see that the film has been recognized for its fantastic cast and for really launching Jason Voorhees into the public consciousness.

6. Friday the 13th A New Beginning

This installment didn’t exactly kill at the box office but it wasn’t really a bomb, either. Numbers aside, A New Beginning has taken a turn in recent years, with more fans coming around to it as the campy, trashy, over-the-top entry that will eventually start to grow on you like a wart if you give it a chance. With that said, I haven’t gotten there yet. But never say never.

It’s no surprise this installment stands as one of the higher-grossing entries in the series. It’s possibly the best of the original cannon. This installment introduced the iconic Tommy Jarvis and also gave monster kids the kind of on-screen visibility that was nearly unheard of at the time of the flick’s release.

This threequel is a huge part of the reason we have the Friday the 13th franchise as we know it. It out-performed the second installment, proving that there was still an audience for Jason Voorhees, even after the second film didn’t live up to expectations. Not to mention, without this lighthearted third series outing, Jason would never have donned the iconic hockey mask that he stole from poor Shelly Finkelstein.

The fact that the original has only been out-performed by the remake and Freddy vs. Jason is a true testament to what an iconic effort it is. Sure, Friday the 13th has its flaws. Namely, the clunky manner in which the killer is introduced. However, it’s an atmospheric film that kicked off a legacy that has lasted more than 40 years. And that is pretty special.

This remake really had the right idea. Sort of collecting the events of the first several films and loosely retelling said events in a single feature worked really well. Solid performances, a smart script, and brutal kills make this one of my personal favorite Friday the 13th films. And I would argue that this 2009 outing makes a case for why we shouldn’t immediately write off remakes.

This crossover effort has the benefit of bringing together two beloved characters under the same roof. Appealing to two separate fan bases and pitting the iconic killers against one another served to pique the curiosity of horror fans and even managed to pull in some of the mainstream moviegoing public. Accordingly, Freddy vs. Jason stands as the highest-grossing series installment. There’s a certain irony there, considering the most successful franchise entry is not even really in canon.