It's already been such an incredible year for the genre. 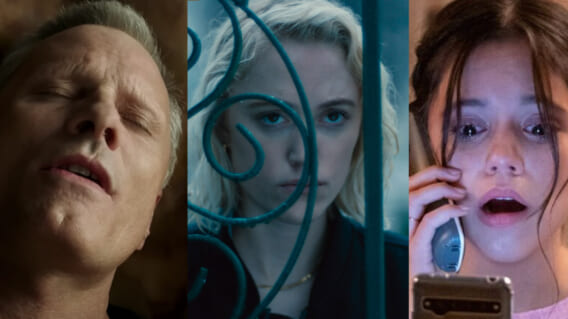 As wild as it sounds, we’re halfway through 2022. It’s felt like both five minutes and 20 years, which honestly is par for the course for these last few years. Regardless of our own fears about the passage of time, there’s no denying 2022 has already been an absolute banger of a year for genre filmmaking. We saw the newest Scream reinvigorate the franchise. Ti West came back to horror with X. And the indie horror scene is more incredible than ever. And there’s still so much to look forward to, from Jordan Peele’s Nope to Addison Heimann’s Hypochondriac.

To mark the halfway point of this year in horror, here are my 10 favorite horror movies of 2022 so far.

I’m a found footage horror freak and I’m proud. It’s an incredibly unique subgenre full of nightmarish creativity. Director Robbie Banfitch has set the contemporary found footage bar high with his new film, The Outwaters. It follows a group of friends going to the desert to film a music video. But, when they arrive, bad things start quickly start happening. It’s a film that really can’t be described; it must be experienced. It’s playing all over the festival circuit right now so seek it out if you can. It’s gory, it’s disorienting, it’s a trip through hell.

Mattie Do is the only director in Laos making genre films. Her perspective is strong, poignant, and a crucial one in working to decolonize a genre dominated by whiteness. The Long Walk is her third feature film and is a masterpiece. I know people shudder at that word, but it truly is a testament to the power of genre storytelling in interrogating the past. The film is a sci-fi serial killer movie with ghosts and time travel. It’s heart-wrenching and truly gorgeous.

Chloe Okuno brought us our new lord and savior, Raatma, in her segment of V/H/S/94. Now, she’s really showing off her talents in her feature film debut Watcher, starring contemporary scream queen Maika Monroe. With Watcher, Okuno captures a feeling of creeping dread and paranoia. It’s Hitchcockian in its approach, but much more focused on Monroe’s character’s desire for agency. It is simply stunning.

While I’m a sucker for a good atmospheric and moody horror, I also love a good, gory, plain fun genre film, too. And that’s exactly what Kiah Roache-Turner creates in Wyrmwood: Apocalypse, the sequel to his 2014 film Wyrmwood. The film is described as Mad Max meets zombies, and really, that’s the perfect description. It’s a dusty road movie with gnarly zombies and a flair for gore. It’s a damn good time, just what we need to escape the 2022 reality, even for just a few hours.

Everything Everywhere All At Once

Ok, so the latest film from Daniels (directing duo Daniel Kwan and Daniel Scheinert) isn’t technically a horror movie. But it’s definitely a genre film as Michelle Yeoh’s Evelyn falls through the multiverse to save the world. That’s why it’s on this list. It’s also one of the best films of the year, period. Yeoh is, as always, stunning as the disgruntled Evelyn who isn’t a great person. She’s mean, she’s abrasive, but she also just wants the best for her family. Daniels makes a dazzling and deeply touching sci-fi film about love, family, and acceptance.

Crimes of the Future

Another triumphant horror return this year was David Cronenberg’s body horror comeback, Crimes of the Future. Viggo Mortensen stars in the film as Saul Tenser, a performance artist who undergoes surgeries in front of an audience. In this world, where people don’t feel pain or get sick, surgery is the new entertainment. It spirals into a world of organ conspiracies and how bodies change in an uncertain future. It’s not as gross as Cronenberg’s previous horror outings. But it’s touching, surprisingly funny, and a glorious return for the director.

Friends Josh Wallace and Devin Das came together to deliver us a darkly comic yet harrowing horror satire about capitalism, the grind to succeed, and serial killers. Sure, we’ve seen consumption and capitalism linked with murder and cannibalism before. But with Keeping Company, Wallace and Das made something special. It’s on-the-nose and absolutely ridiculous, which works in its favor. Wallace and Das masterfully craft the film’s tone to give us something that makes us laugh, but also makes our stomachs churn.

Director Brea Grant and writer Rachel Koller Croft have created a whole new horror subgenre with their new film Torn Hearts: country horror. It’s shocking that the saccharine yet brutal music genre hasn’t been touched by horror filmmakers before. But Grant and Croft have taken charge with a film drenched in pink and red, blood mixed with rhinestones. It’s high femme horror and we need more of that, quite frankly.

We were all apprehensive about Radio Silence’s newest entry into the Scream franchise. It was the first Scream film without Wes Craven and featured a cast of fresh blood. Of course, Neve Campbell, Courteney Cox, and David Arquette made their triumphant returns. But even better was the fact that the film was so good. Directors Matt Bettinelli-Olpin and Tyler Gillett captured the spirit of Scream and placed it perfectly in the 2022 context. Plus, it featured queer characters and people of color! It’s true, you can in fact cast queer actors and actors of color quite easily!