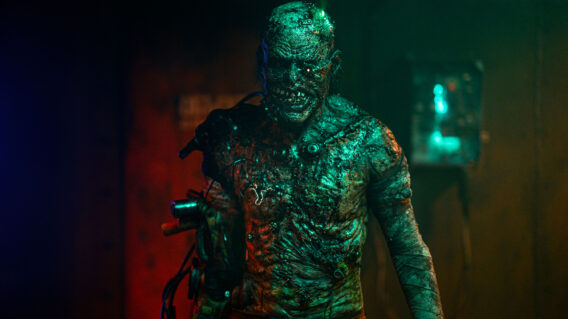 Australian filmmaking duo (and brothers) Kiah Roache-Turner and Tristan Roache-Turner know gore. From their debut feature film Wyrmwood: Road of the Dead to their demons-meet-the-internet romp Nekrotronic, these two know how to work with red corn syrup and practical effects to create their nasty creatures. They’re back to show off their skills once again with Wyrmwood: Apocalypse, the sequel to their debut film. And these exclusive behind-the-scenes photos we scored show off not just gore, but a crew that had an incredible time on set.

In Wyrmwood: Apocalypse, Rhys lives in the zombie-infested wasteland. His job is to capture civilians and deliver them to what’s left of the military. When Rhys captures a half-zombie-half-human named Grace, he comes to believe she is the key to ending the apocalypse.

Speaking of our stars, we also got a look at the incredible character posters created for Wyrmwood: Apocalypse.