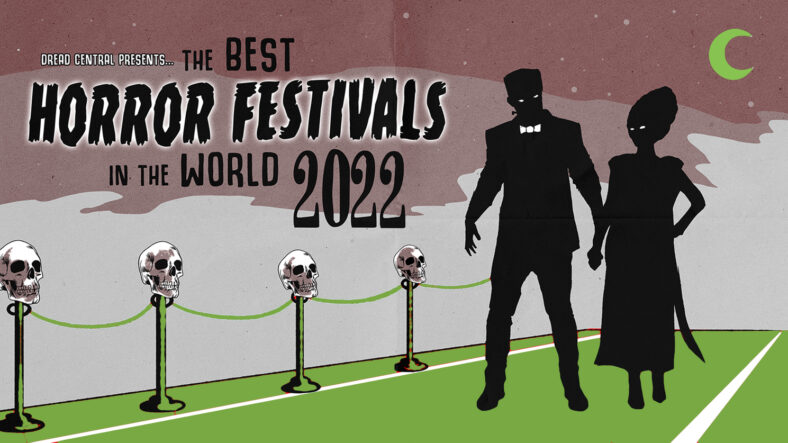 Dread Central‘s second annual guide to the Best Horror Festivals in the World was voted on by 11 industry experts. The panel for this edition includes some of the best and brightest filmmakers, festival directors, and distributors working in the genre today. Panelists who work with festivals did not vote for their own.

From left to right, here they are:

The Adams Family—John Adams, Toby Poser, and their daughters, Lulu and Zelda—are a filmmaking family under the creative marquee of Wonder Wheel Productions. Prior to their most recent horror film, Hellbender, they’ve made five features: The Deeper You Dig (2020), which premiered at Fantasia Film Festival and was distributed by Dark Sky Films and Arrow Video; Halfway to Zen (2016); The Shoot (2014); Knuckle Jack (2013); and Rumblestrips (2012). All earned a hearty reception on the festival circuit, including Best in Show and Audience awards. For each of their films, they’ve employed the same DIY ethic: As a collective team, they write, direct, produce, shoot, edit, act, and compose. The family lives in the Catskill Mountains of New York. Visit their website at WonderWheelProductions.com.

Mattie Do is Laos’ first and only woman filmmaker, and the director of Chanthaly, the country’s first-ever horror film. Her second feature, the supernatural chiller Dearest Sister, was selected as the Laotian entry for the Best Foreign Language Film Academy Award, marking the first time that Laos submitted a film for consideration in this category. Her third film, The Long Walk, similarly explores how people communicate with the dead. The Long Walk premiered at Venice International Film Festival in 2019, was acquired by Yellow Veil Pictures in 2021, and is scheduled for an early 2022 U.S. release.

João Fleck and Nicolas Tonsho are the directors and producers of Fantaspoa International Fantastic Film Festival in Porto Alegre, Brazil. Their renowned Latin American genre film festival now celebrates its 18th anniversary in 2022. Since 2014, they’ve produced 11 features that have screened at many of the horror festivals included on this list. Their latest production, Skull: the Mask, is one of the most successful Latin American genre films of the past decade. They are currently in post-production on their most ambitious film to date: the Greek Lovecraftian monster movie Minore, directed by Konstantinos Koutsoliotas.

Jill “Sixx” Gevargizian is a director, producer, writer, and hairstylist from Kansas City, Missouri. In 2012, she decided to bring independent genre films to her hometown by creating a monthly showcase called “Slaughter Movie House.”  She founded Sixx Tape productions in 2014 with her directorial debut short film, “Call Girl.” Since then, she has written, produced, and helmed numerous shorts—most notably, “The Stylist,” which she made in 2016. That short screened at genre festivals across the globe and won 20 awards, and inspired her debut feature of the same name, which was released by Arrow Video in 2021.

Rob Jabbaz is a Canadian filmmaker best known for writing and directing the Taiwanese film The Sadness. This film won several awards in 2021—most notably, the New Flesh Award for Best First Feature at Fantasia International Film Festival, as well as the awards for Best Feature and Best Director in the horror competition at Fantastic Fest. He is participating in this panel in the hope that in some roundabout way, it leads to him getting booked in better hotel rooms the next time he goes on the festival circuit.

Adrian Tofei is an acclaimed Romanian filmmaker and actor and the director, producer, writer, and star of the found footage cult horror movie “Be My Cat: A Film for Anne.“ Adrian is also the author of “Top 100 International Film Festivals + Submission Tips,“ both appreciated and used by numerous filmmakers worldwide, and the author of “Found Footage Manifesto.”

Peter Van Steemburg is the talent manager of XYZ Films, the independent production company and worldwide sales agency behind such genre gems as The Raid and its sequels, I Don’t Feel at Home in This World Anymore, and Mandy. His career in film began in the international distribution division of Miramax Films, and since then, he has worked in the film finance department at Cinetic Media; the acquisitions department of Magnolia Pictures and Magnet Releasing; and the international independent department of ICM Partners. Before joining XYZ, he was the vice president of acquisitions and production at Universal Pictures Content Group, where he was responsible for acquiring independently produced features for North America.