Baby it's cold outside. 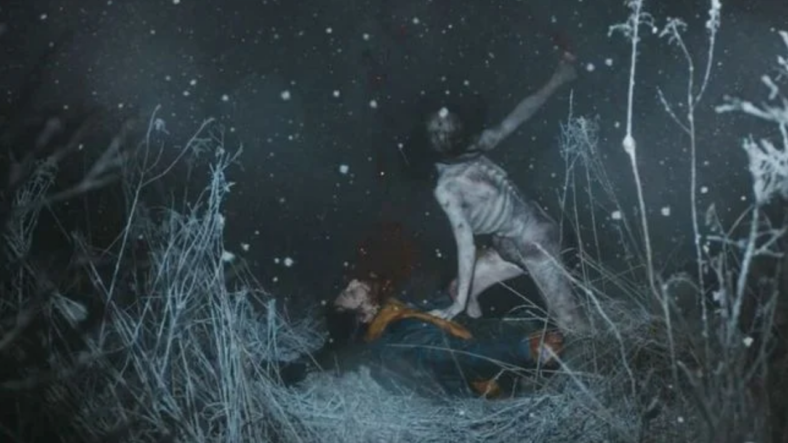 In some parts of the world, it’s really starting to feel like winter. Here on the East Coast of the U.S., we’ve had a week full of ice, snow, and freezing cold temperatures. That means I won’t be leaving my cozy bed all weekend. If you’re also choosing to stay in this weekend and need something to watch, why not go for found footage? Better yet, why not go for some freezing cold found footage?

A good snow-covered POV film is hard to find, but I’ve picked out a few for you that you can pop on the TV and watch from underneath your favorite blanket. These movies will also validate your decision to stay indoors and not wander into the cold.

This is one of the few found footage movies that came out before The Blair Witch Project. Released in 1998, The Last Broadcast is a pseudo-documentary about a film crew that goes missing in the Pine Barrens. The Pine Barrens, located in New Jersey, is the infamous home to Jersey’s cryptid, the Jersey Devil, a winged and hoofed creature. These three men were going out to film the first-ever live stream event, something in 1997 that was technologically impressive. In their recovered footage, the crew trudges through the snow, trying to find the perfect place to make camp. As their boots crunch into the frozen ground, tensions begin to mount as they can’t find their way back to the car. Then, as more clips are revealed, white snow starts to turn white. I’m a sucker for blood on snow, and The Last Broadcast delivers just that.

This piece of crucial found footage history isn’t anything that you’ll expect. It’s weird, a little experimental, and way ahead of its time. It’s the perfect way to spend a snowy afternoon.

This hidden found footage gem may not be on your radar, but it should be. In The Black Water Vampire, a small film crew investigates the horrific Black Water murders. They believe the person convicted is innocent, and they want to prove it. But, their snowy hike into the woods of Black Water proves much more horrendous than expected. No person is massacring human flesh there. It’s something worse. There isn’t a lot of creature work in found footage, which is this one stands out. Yes, it has the expected roughness of a low-budget found footage horror, but it has a damn good monster. And again, we get a lot of blood in the snow, which is just perfect for a movie about vampires.

Andre Ovedral’s Trollhunter is a found footage marvel. He’s able to create a giant monster found footage film that’s terrifying, a little funny, and almost convinces you that trolls are real. It starts like most found footage: with a group of college students making a movie. Here, specifically, the young trio is investigating illegal poaching in Norway. Along the way, they run into a strange man they learn hunts trolls for the government. It could easily become something silly, but in Overdal’s hands, it’s a complex and rather scary look at fantastical creatures. There isn’t just one type of troll here, either. There’s an entire pantheon of the creatures, and we see several different species throughout Trollhunter. The film also features incredible use of night vision and is able to execute an incredible sense of scale with the beasts.

This 2017 found footage film doesn’t just take place in the snowy woods. It’s also set in the ’70s and seemingly filmed on physical film thanks to some strategic editing and effects. The time period with the snow creates a terrifying look into the past that doesn’t involve modern age technology. There’s no night vision or fancy camera settings. They only have the giant, chunky apparatus and flashlights. A couple lugs this equipment into the mountains on the French-Swiss border with a crew of scientists to investigate recent cow maulings. They’re filming for a local TV station, and they want to get a scoop to prove their worth as journalists. But the thing doing the maulings is more than just a wolf…

Paranormal Activity: Next of Kin

Hear me out. Paranormal Activity: Next of Kin was good. I know it’s a big deviation from previous franchise entries. But that’s what the franchise needed. Yes, the restriction to one home is incredibly effective and centralizes the tension. But the seventh installment of this series broke the mold and swung for the fences. The snow-covered fences. In the film, Margot heads to an Amish community to hopefully learn more about her past. But of course, it all goes sideways the second she starts digging for information. It explodes into a wild third act that’s unlike anything we’ve seen in Paranormal Activity. Director William Eubank uses snow to his advantage, playing with visibility and what you can see through the falling flakes. It embodies the pain and discomfort of the middle of winter.

If you’ve never heard of the Dyatlov Pass Incident, spend some time in that Google rabbit hole. The long and short of it is, a group of Russian hikers go hiking in 1959 and disappear. Later, their bodies are found and their causes of death are still unsolved. All we know is that three of them died tragic deaths and no one knows who did it. So, in Devil’s Path, a group of Americans decides to travel to Russia to solve the mystery. You know, the typical set-up for found footage. What they find is downright deadly.

The most recent V/H/S/94 features some of the franchise’s strongest segments. One of those segments is perfect for this list: Ryan Prows’ “Terror”. In his short, an extremist militia plans to unleash their secret weapon onto the world in the name of “taking back America”. Snow covers the grounds of the farm where they hide their weapon: a vampire. There are some questionable politics in depicting backyard militias as total idiots that aren’t a threat at all. Prows does try to strike a balance there, and I applaud the effort, especially in light of recent events. There’s also some great creature work here that makes this vampire something horrifically special. If you want a short burst of cold, this segment is the perfect choice.