We sat down with Richard John Taylor to chat about his recent film 'The Haunting of Pendle Hill'. 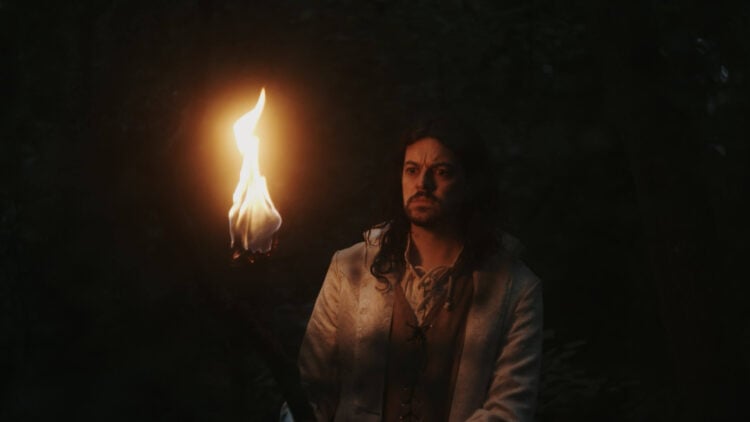 Director Richard John Taylor has provided Dread Central with an exclusive trailer for his upcoming horror film The Haunting of Pendle Hill, along with two new stills from the production. He also granted us the following interview about the film, which you can enjoy along with the trailer and stills below. Taylor’s previous movies include The Krays: Dead Man Walking, Muse, and Vengeance.

The Haunting of Pendle Hill stars Lowri Watts-Joyce as a young American woman who travels to Pendle Hill in Lancashire, England, which was the site associated with the historical Pendle witch trials, to investigate her father’s mysterious disappearance. Nicholas Ball, Evie Hughes, Mark Topping, and Jimmy Bennett also star in the film. It’s slated for release next year.

Dread Central: What attracted you to the historical story of Pendle Hill?

Richard John Taylor: When we were in the development, we were looking at well-known haunted places in England and Pendle just stood out. I spent some time in Lancaster and the surrounding areas last year and so knew a little of the backstory. Although we didn’t shoot in Pendle itself, visually the idea of this huge imposing hill also really appealed to me, a bit like the infamous castle on the hill in Edward Scissorhands, looming there as a constant, dark reminder to the residents of the world below.

And how did you adapt the historical accounts for a modern audience?

RJT: That almost happened by accident, we were working with a tight budget and I know from past experience trying to pull off a period film with that constraint is always a challenge. So we came up with this idea of setting the film across two time periods, with our main female character in the present investigating the disappearance of her father who was researching Roger Nowell, the magistrate of Pendle Hill at the time of the infamous 1612 Witch Trials and the story jumps back and forth between her search and what he was researching.

Can you talk about the cast for The Haunting of Pendle Hill?

RJT: The film is bookended by Nicholas Ball, who is always a joy to have onboard. I’d worked with Lowri Watts-Joyce previously on The Krays: Dead Man Walking and she had a small role in my horror film Muse shortly after, which also starred Jeffrey Charles Richards, who this time stars as Arthur. Mark Topping appears as Father Michael, I’d been trying to find something to work with him on for a while as he had been highly recommended to me many times so it was great to finally make that happen. We also had James Hamer-Morton and Jimmy Bennet, who bring this real can-do, team spirit attitude with them which is invaluable on indie films.

There was wonderful local talent including Evie Hughes and Noel, the latter has a background in stage and screen and previously lent his vocal talents to a few other productions of mine but has such a great look and presence, there really wasn’t anyone else who could have played Roger Nowell. Evie was only thirteen at the time we shot but was a complete natural, she has one of those infectious smiles that cheers you up instantly, no matter how many endless hours you’d been stood out in a freezing forest. Every movie set needs an Evie. We were shooting another film at the time with Coronation Street actress Rula Lenska so she also kindly made a very discreet yet memorable cameo.

How did filming go? I understand you shot on location.

RJT: Absolutely, when you’re trying to get that remote feeling, both for a feel of scope and vastness, but also to find woodland so isolated and remote that you have no traffic noise, everything was shot on location, namely Wales, Devon and Cumbria. We were blessed with a slightly longer shoot schedule than I had previously worked with, meaning sometimes we had more time to craft certain scenes. The downside of course is behind beholden to the weather, which added some days but the footage was well worth the wait.

And revealing too much I understand you will be using visual effects to create some very creepy imagery?

RJT: Yes, visual effects, like a lot of technology we use, has become so much more accessible in recent years so it was great to up the ante with a handful of shots. It’s not just useful for creating creatures but if you’re filming. for example, in a location where you’re trying to achieve blood effects without risking property damage, so much of that can now be done in post-production with much more creative freedom and control. It can also rescue an unexpected situation, like in my previous film, Vengeance, the scene where Billy Murray assaults the main antagonist in one continuous take was largely improvised by Billy and so it wasn’t possible to add in blood during filming, but it was doable by adding it digitally afterwards.

What’s next for you?

RJT: We’re currently in post-production on a revenge thriller The Huntress Of Auschwitz before we start filming another horror in February, Silent Night as well as a crime film titled Requiem.