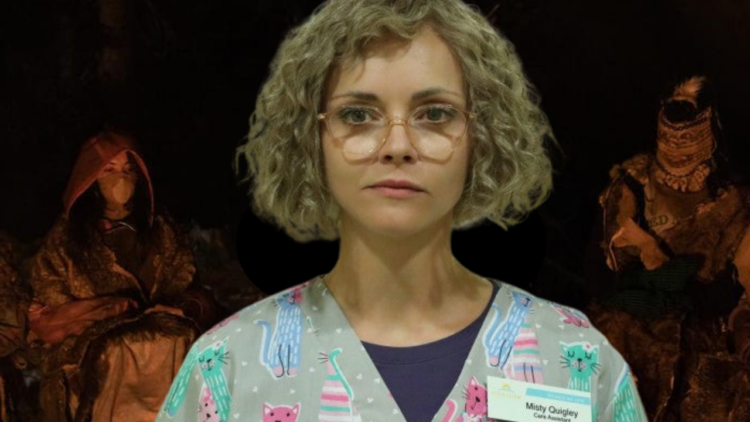 We’ve had an embarrassment of riches this year when it comes to genre TV series. From SYFY’s Chucky to Netflix’s Midnight Mass, horror fans have been able to gleefully dive deep into horrific worlds. But, perhaps 2021’s best genre show of them all is Yellowjackets. It may only be on its fifth episode, but this Showtime series packs one helluva disgusting and incredible punch.

Yellowjackets starts in 1996 when a girls’ high school soccer team survives a horrendous plane crash in the middle of nowhere. For 19 months they are left in the wilderness to fend for themselves, which may or may not result in cannibalism. Look, a girl’s got to eat. But the show doesn’t just look at the horrors of their situation. It also flashes forward to the present where four survivors try to live their lives as normally as possible in the face of their trauma. But, someone is bringing their past back up to haunt them. Yellowjackets beautifully weaves together these two timelines to tell stories of the past, the present, and how the two are inextricably linked, much to the characters’ chagrin.

So why exactly should you be tuning in?

It’s like Lord of the Flies and Lost, but better (so far).

Chances are many of you were swept up in the Lost craze that dominated the zeitgeist from 2004 to 2010. I know I sure couldn’t wait for Wednesday evenings to travel to The Island with the group of survivors who encountered some incredibly strange circumstances (never forget that polar bear). But we all know how that ended. Now, Yellowjackets is here to scratch that itch. However, it leans even further into the Lord of the Flies influence as a group of teens trying to survive with essentially no adult supervision. But here, it’s young women, not young boys.

William Golding, who wrote Lord of the Flies, actually addressed why he wrote his novel about only boys. He said,

“I think women are foolish to pretend they’re equal to men; they’re far superior and always have been. But one thing you cannot do with them is take a bunch of them and boil them down, so to speak, into a set of little girls who would then become a kind of image of civilization, of society.”

Well, Yellowjackets proves such a conclusion patently false. Women know violence. They know blood. As a woman myself who has been a target of bullying from other women, Golding was, quite frankly, speaking out of his ass. So, Yellowjackets shows just how violent and ruthless women can be, especially when it comes to survival.

When I say Yellowjackets is ruthless, I truly mean it. The first episode of the series opens on a snowy scene where a young woman is sprinting through the frozen wilderness, barefoot, as voices whisper all around her. As she’s quite literally running for her life, she steps into a concealed trap. She falls into a hole full of sharpened sticks, which pierce her body and kill her almost instantly. From the opening minutes where a young girl is killed, we know that Yellowjackets isn’t playing around. This isn’t a show about innocent, helpless girls; this is about how we adapt to our surroundings and what it means to survive.

Then, there’s the initial plane crash sequence, a repulsive spectacle that shows people on fire, girls impaled with metal rods and more. But the show’s writing team knows where to toe the line. It’s upsetting and disgusting, but never exploitative and never revels in the suffering and destruction of the female body. Instead, Yellowjackets is trying to foreshadow the violent reality that awaits. Legs are chopped off with axes, dead bodies are retrieved from trees, and mouths are shown digging into what may in fact be human meat.

Plus, the girls all grown up haven’t lost their edge. Sure, they aren’t struggling to survive in the same sense, but they are each trying to keep their heads above water in a society that is just dying to know if they’re actually cannibals. At one point, the seemingly timid housewife Shauna (Melanie Lynskey) butchers a rabbit in her backyard and quickly skins and guts it for dinner. No matter how long ago their trauma was, she’s never lost her ability to take a life when necessary.

The performances are stellar.

Speaking of Lynskey, she, alongside an incredible cast of both seasoned and new actors, creates a deliciously unstable ensemble that you love but are also a little bit scared of. Juliette Lewis plays Natalie, who’s recently graduated from rehab and knows something is up. Christina Ricci plays the delightfully unhinged Misty who most definitely has some skeletons (both literal and metaphorical) in her closet. Tawny Cypress is the stern Taissa who’s running for office despite her past. The four of them alone are a tour de force of messy, badass women trying to piece together why someone is digging into what exactly happened during those 19 months.

But, then there are their young counterparts, plus a few others who sadly may not survive, who truly round out a group of performers unafraid of delving into the darker sides of humanity. Sophie Nélisse and Sammi Hanratty, who play young Shauna and Misty respectively, are especially breathtaking to watch on screen. Nélisse is quiet, yet calculated, full of secrets and hidden cruelty. Her seeming innocence is used to her advantage and I imagine she’ll continue to be a dark horse of violence as the season progresses. Hanratty makes Misty almost unbearable, and I mean this as the highest compliment. She is dripping with fake platitudes and empathy, which really all just serve her own desires to be loved. And yet you also feel sympathy because she’s the weird girl bullied for being a nerd. She also pulls some infuriating antics that make her quite the villain.

The characters are messy and chaotic.

Between Misty’s villainous behavior both in 1996 and in the present, Natalie’s proclivity for alcohol, Shauna’s infidelity, and Taissa’s guarded persona, these are not necessarily role models. These women are messy and chaos incarnate. And that’s why Yellowjackets works so well. None of them are caricatures of the typical female character. Instead, the writing team takes these preconceived notions of female archetypes—the bitch, the party girl, the housewife, the nerd—and adds nuance, rage, violence, and desperation. These aren’t women to invite to a baby shower or a backyard barbecue. No, these are women you shoot whiskey with at your local dive bar.

And again, the teenage girls are not meant to be pinnacles of innocence or evil. They’re all kids trying to cope with being kids on top of having to survive in the middle of the woods. Tere’s nothing better than a messy character and Yellowjackets has them in spades.

It’s a female-dominated production both in front of and behind the camera.

Yellowjackets is the brainchild of writer Ashley Lyle (Narcos) and her husband Bart Nickerson. She told the New York Times, “I just wanted to tell what felt like a very real story about teenage girls.” And boy did she. While Nickerson and Jonathan Lisco helped pen the show, the production is still dominated by not only a mostly female cast, but a mostly female team of directors and writers. The iconic Karyn Kusama (Jennifer’s Body) directed the first episode and serves as an executive producer. So why does this matter? Because this is a story about women.

Time and time again male creators have tried and failed to create complex female characters. Now, that’s not to say it’s impossible. But with a show like Yellowjackets, which is all about tapping into the experience of being a teenage girl, a team of people with that experience is crucial in creating such a complex and weirdly loveable, yet sometimes deplorable, group of both girls and women.

All of this comes together into the yummy stew that is Yellowjackets. So what are you waiting for? Yellowjackets airs on Sunday on Showtime.