What’s Going On In the Ending of ‘Lamb’? 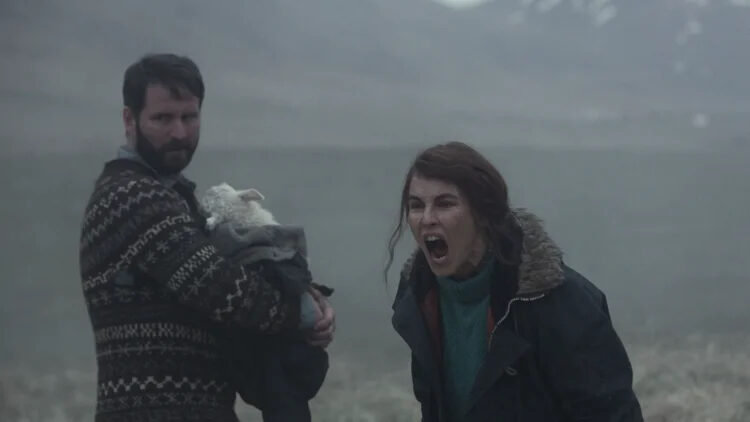 Noomi Rapace (R) and Hilmir Snær Guðnason (L) in 'Lamb.' Courtesy of A24

When Lamb director Valdimar Jóhannsson said in August that his debut feature is “not a horror movie!,” people were skeptical. Distributors A24 undoubtedly marketed the film as a supernatural horror fable, with a hyper-tense, rhythmically spliced trailer that cued us into its characters’ eerie environs and strange relationship to the sheep on their Icelandic farmstead.

But Jóhannsson says the film didn’t take on that darker tone until he was deep into editing it.

“In the beginning, I felt totally sure that Lamb didn’t even need a score,” Jóhannsson tells Dread Central. “But when I was editing it, I saw that there were some spots where we’d need it to create the sense of an outside threat.”

From the moment the couple witness the birth of a human-lamb hybrid baby on their farm and adopt it as their own, the film almost feels like a light, oddball comedy—milking the ensuing sight gag for all it’s worth. But when María decides to shoot and kill the maternal sheep that gave birth to the titular lamb, we also get a glimpse of the couple’s twisted sense of entitlement. And every so often, Guðnason’s wailing cacophony of strings surfaces to remind us that their new “child”—whom they name Ada—was never really theirs to claim.

That unsettling set-up brings us to the ending. And whatever you might think of Lamb, this climax is unmistakably the stuff of horror.

In the film’s final moments, Ingvar comes face to face with Ada’s biological father: a vengeful, gargantuan creature with the arms and torso of a man and the legs and head of a ram. The creature blasts Ingvar to death with a rifle, drags Ada back into the wilderness, and leaves María to sob in despair over Ingvar’s lifeless body.

Jóhannsson says that he and co-writer Sjón drew heavily from regional folk tales to tell Lamb’s story, but that “the creature is something we just came up with. I haven’t found anything like it in Icelandic folk tales. Maybe we were trying to create a new folk tale.”

He’s right—nothing that looks like Ada’s father exists in Icelandic lore. But the creature does bear some creepy resemblance to another mythical beast: the goat-human hybrid god known in Greek mythology as Pan.

Pan’s roots in horror fiction run deep. The deity inspired Welsh writer Arthur Machen’s horror novella The Great God Pan, which influenced the likes of Bram Stoker and H.P. Lovecraft and once moved Stephen King to call it “one of the best horror stories ever written… maybe the best in the English language.” (The English word “panic” also originates from the Greek god’s name.)

To preserve the ambiguity of Lamb’s ending, Jóhannsson mostly deflects when asked about the origins of the creature. But when Pan is mentioned, he admits to the Greek god’s influence on the script.

“Sjón is a specialist in all these mythical stories, and he studies them with an almost academic focus,” Jóhannsson says. “So, yeah… I think a part of it is Pan. But he also added to that, to create the strange feeling we wanted for the film.”

The similarities between Pan and the monster of Lamb lie not only in appearance, but also in what the two characters signify.

In ancient mythology, Pan is portrayed as a deity of fertility, shepherds and flocks, and the untamed wilderness. Lamb’s grim tale—of a sheep-farming couple encircled by chilly mountains, distressed by their inability to have a child of their own—contains all of the elements that Pan represents.

“At some point in the film, it becomes clear that María and Ingvar lost a child,” Jóhannsson explains. “My grandparents were sheep farmers, and the beautiful thing I took from their relationship is that on a sheep farm, there are no ‘man’s jobs’ or ‘woman’s jobs.’ That creates a mutual respect. Our characters share that respect for one another. But you feel that there’s something wrong and you feel their grief. There’s a sorrow that weighs on their relationship.”

“When we were writing the script, we found that there were many meanings to the ending,” he continues. “But the creature could stand for nature. It’s important that everybody can make something of it for themselves. I’ve even changed my mind a few times on what it means.”

Have you seen Lamb? What did you take away from its doomy climax? Let us know in the comments below or on Facebook, Twitter, or Instagram. Dread Central is now on Google News.