Our next episode of "Dissecting Horror" will feature Gigi Saul Guerrero and the creatives behind 'Bingo Hell'! 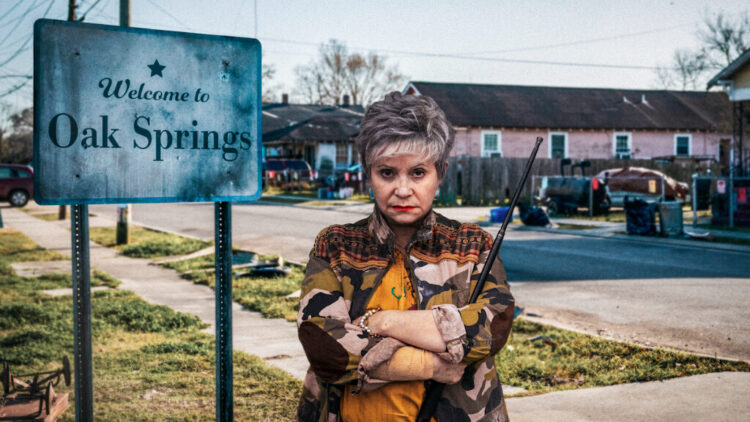 The next installment of the “Dissecting Horror” digital panel series will take place Tuesday, October 5th at 6 pm PST and be with the creative talent from Blumhouse’s Bingo Hell.

Bingo Hell, one of the latest installments of Welcome to the Blumhouse, will arrive exclusively on Prime Video on October 1st!

In the Barrio of Oak Springs live a strong and stubborn group of elderly friends who refuse to be gentrified. Their leader, Lupita, keeps them together as a community, a family. But little did they know, their beloved Bingo hall is about to be sold to a much more powerful force than money itself.

Dread Central and Jordan von Netzer of Projection PR launched “Dissecting Horror” on April 15th, 2020 with a panel focused on horror film scores. Since then, they have produced panels spotlighting stunt coordinators, costume designers, composers, visual/special effects and the creatives behind Followed, Cruiser, 12 Hour Shift, Don’t Look Back, Hunter Hunter, Willy’s Wonderland, Wrong Turn, Dreamcatcher, Making Monsters, The Banishing, The Stairs, The Boy Behind the Door, We Need To Do Something, Initiation, The Djinn, Superhost and Parallel.

Gigi Saul Guerrero, born and raised in Mexico City, also known as “La Muñeca Del Terror” in Latin America. She is a Mexican genre director/filmmaker and actress living in Vancouver Canada, she’s described by Variety and L’attitude Latinxt as part of the new wave of Latino talent.

Gigi graduated with honors at Capilano University’s Bosa Centre for Film and Animation and is also a current Directing instructor at Vancouver Film School. She has been praised as one of the top, emerging directors in the horror genre by Empire, Dread Central, Fangoria and Bloody Disgusting. Guerrero is co-founder of Luchagore Productions In Vancouver Canada. Guerrero directed an action-packed episode for The Purge season 2. She directed her feature debut Culture Shock for Blumhouse Productions Television, winner of Best Primetime movie at the Imagen Awards and it is still 100% fresh on Rotten Tomatoes. Guerrero started her career with several genre short films including gore-fest El Gigante now available on Shudder, and viral hits like A Luchagore Christmas and Evil Dead in 60 seconds. In 2014, Guerrero participated in the Mexican horror anthology Mexico Bárbaro with its Day of the Dead segment while still in film school. Her series with Warner Brothers/Stage 13, La Quinceañera, won the Audience Award at the 2017 Morbido Film Festival.

Guerrero is not just her talent behind the camera but her beauty in front. She has posed for Playboy Mexico, and many pinup holiday-themed pictures! She is also an actress and most commonly known for her voice-over work such as Netflix’s Super Monsters as Vida, and Marvel Superhero Adventures as Spider-Girl.

Raynor Shima is a Vancouver, BC-based Producer and creator. He arose from commercial film to become an emerging independent producer to look out for. He started his transition through a partnership, co-founding the award-winning company, Luchagore Productions as an outlet for story-driven content, specializing in the horror genre.

His films have gone to screen all over the world from Sitges to LaLiff, winning multiple awards, and being recognized for a unique style of films produced, that are heavily influenced by a Latino mix. In 2017 he collaborated with Warner Brothers and Stage13 network in producing a 7 episode mini-series called La Quinceañera, a coming-of-age revenge story.

Byron Werner is an LA-based Director of Photography who has shot a massive collection of work over his 20 years of filmmaking in feature films, short films, music videos, and commercials.  Byron’s cinematography is showcased in Todd Robinson’s Phantom starring Ed Harris and David Duchovny and The Last Full Measure starring Samuel L. Jackson, William Hurt, Sebastian Stan and many others.  Byron’s work in Jose Manuel Cravioto’s Bound of Vengeance premiered at Sundance Film Festival.  In 2019 Blumhouse released his work in Culture Shock through their “Into the Dark” series on Hulu.

Byron has shot over 100 short films and commercials for many top-named brands including Target, Adidas, Microsoft, Michael Kors Taco Bell, and HP.  Byron’s work in music videos has him sought after by many of today’s leading musicians including Coldplay, David Grohl/FooFighters, Bruno Mars, The 1975, ELO, Pharrell, The Killers and more. His Coldplay “Orphans” music video won the MTV VMA for Best Rock Video in 2020.

Byron Werner grew up in the San Fransisco Bay Area. At the age of 16, he began his career working at Sega studios creating live-action video games. While earning a Bachelor of Fine Arts in film and television from Chapman University, Byron shot his first feature film, the first of over thirty. He never moved up through the ranks; rather, he shot anything and everything he could as a DP, using experience to further his education.

When Byron’s not behind a camera his focus is on his 2 young daughters, his wife and fantasy football.  Byron is represented by Agency for the Performing Arts (APA).

Jonathan Medina was born and raised in New York City. A naval veteran, Jonathan moved to Los Angeles to begin pursuing his lifelong dream of acting in 2014.

There he shot a number of short films and commercials before booking his first network role on Criminal Minds: Beyond Borders.

Jonathan has since booked roles on The Terminal List, Our Flag Means Death, Bingo Hell, The Longest Sleep, Shameless, The Brave, Westworld, NCIS, NCIS: New Orleans, and Seal Team among others.

Jonathan is best known for The Purge: Season 2, where he played Tommy Ortiz for seven episodes. He resides in Los Angeles with his wife, Jennifer Lee Laks.

Shane McKenzie is the author of many books, including Muerte Con Carne, Pus Junkies, Addicted to the Dead, All You Can Eat, Mutt, Fat Off Sex and Violence, and lots more. He wrote comics for Zenescope Entertainment in their Oz series, Grimm Fairy Tales series, and Grimm Tales of Terror series. The film El Gigante, done by LuchaGore Productions and directed by Gigi Saul Guerrero, is based on the first chapter of Muerte Con Carne. He continues to write screenplays for LuchaGore. He lives in Austin, TX with his wife and daughter. He’s staring at you right now.

Are you excited to check out Bingo Hell tomorrow? Will you be joining us on Tuesday for this “Dissecting Horror” panel with Gigi Saul Guerrero, Raynor Shima, Byron Werner, Shane McKenzie and Jonathan Medina? Let us know in the comments below or on Facebook, Twitter, or Instagram! You can also carry on the convo with me personally on Twitter @josh_millican. Dread Central is now on Google News!