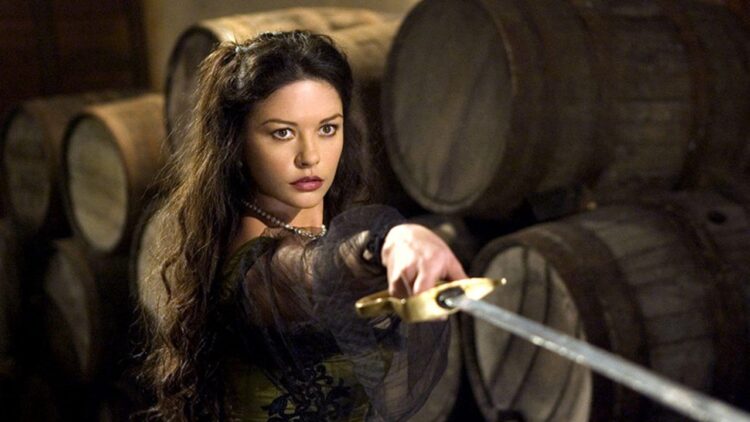 The cast of Tim Burton’s Addam Family spinoff series, Wednesday, is filling out. Earlier today, we reported that Luis Guzmán has been tapped to play Gomez. Now, THR is reporting that Catherine Zeta-Jones will play Morticia in Wednesday, starring Jenna Ortega in the titular role.

Catherine Zeta-Jones has been tapped to serve as a guest star and play the matriarch in the eight-episode series from director Burton and showrunners Al Gough and Miles Millar (Smallville, Into the Badlands). Wednesday is described as a sleuthing, supernaturally infused mystery charting Wednesday Addams’ years as a student at Nevermore Academy. Wednesday attempts to master her emerging psychic ability, thwart a monstrous killing spree that has terrorized the local town, and solve the supernatural mystery that embroiled her parents 25 years ago — all while navigating her new and very tangled relationships at Nevermore.

Tim Burton will serve as executive producer with writers and showrunners Alfred Gough and Miles Millar (Smallville). MGM TV will finance the series. Wednesday is the lead of the show which is set in the present day.

Still, it’s hard to deny that Zeta-Jones seems naturally fit for the role, so we’re hoping for the best!

Are you a fan of The Addams Family? How do you think Catherine Zeta-Jones will fair as Morticia in Tim Burton’s Wednesday series? Let us know in the comments below or on Facebook, Twitter, or Instagram! You can also carry on the convo with me personally on Twitter @josh_millican. Dread Central is now on Google News!