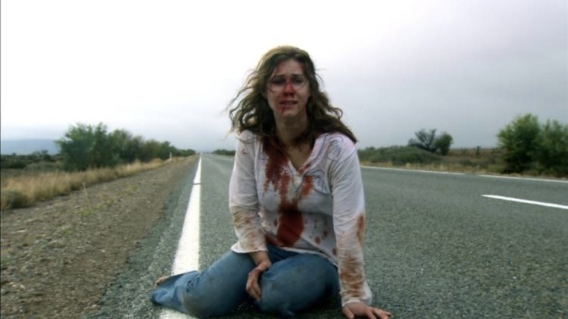 For absolutely no reason, I have decided we need a streaming guide about road trip horror movies. While this is not my area of expertise, I knew there was a ton out there. I am also pretty sure most of the people who made the ones on this list are not literal monsters. So again, I have made this list for no reason. However, I hope it helps some people find a different road trip horror movie to love. May it help some people let a franchise that should’ve never existed go swiftly into that silent night.

Three men end up in a deadly car chase with a rando. This is one of the many on this list I have not seen. It sounds like the regular early aughts situation, and Jason Dohring is there for some reason. As a Veronica Mars fan, I am going to open a drink and watch it.

Where You Can Watch: Amazon Prime and Tubi

A family takes a shortcut on the way to Christmas Eve with the in-laws. It clearly does not end well. I saw this movie a couple of years ago, and it is so weird and trippy. I have wanted to revisit it because I am not the biggest fan of Christmas horror, but I had fun. Also, Mother of Horror Lin Shaye is there, so go ahead and hit play.

Where You Can Watch: Paramount+ and Showtime

A stuntman harasses the wrong group of women, and karma is swift. It’s also summed up as Stuntman Mike fucks around and finds out. I LOVED this movie when it came out. I love it even more now that I have had 15 years to fall even harder for the badass cast. Check it out then listen to Dread Central’s Girl, That’s Scary recent episode.

Friends get stranded near a cornfield and stumble across a ritual. I know nothing good happens in cornfields, so this is probably the one I will need to phone a friend for when I check it out. This movie premiered at the 2005 Sundance Film Festival, so it’s weird that I have never heard of it before now

Two brothers on a road trip trick the wrong mother trucker! Paul Walker and Steve Zahn lead this early aughts rollercoaster. This movie is so 2001 that I can almost hear the TRL crowd cheering as I wrap myself in a hoodie and turn to MuchMusic. I hate how much fun I have with this movie, and I cannot explain it. I will not be taking any questions but will be watching it again.

A woman leaves her husband and picks up a hitchhiker. This sounds like a Lifetime movie, but I am curious to see how Mark Hamil fits in. I am not a Star Wars kid, but I know him from stuff found on the other billion pages of his resume. This one has been on my list for a minute, so thanks, Tubi!

A psychologist takes a patient with a car phobia on a trip to help her overcome that fear. We can all assume this plan is going to backfire, and I want to know how. I never heard of this movie until this Google search, and I need answers. First question, why is the lead character named Penny if we are not making Inspector Gadget references?

Where You Can Watch: Hulu and Tubi

This road trip horror situation is an anthology that unfolds on a desert highway. I will watch any anthology, as these streaming guides have proven. Very much here for one with a road trip wrap-around story. Put me in, Coach! Put me in, now!

An angry dad pisses off the wrong driver, and now the whole family is in danger. You would give me family dynamics in a road trip horror? It feels like too much. This dessert could be too rich, and I might have to take breaks before eating it all. However, it is a risk I am willing to take. The movie is also known as Bumperkleef for those looking for it from other places.

Where You Can Watch: Amazon Prime, Tubi, and Vudu

Three friends meet three musicians at a concert, and they all go back to one of the girls’ homes for an after-party. Everything about that sentence tells me this could never be me. However, I am going to check it out because metal girls possibly committing murder seems fun. Fingers crossed that it is as good as I want it to be.

Where You Can Watch: The Roku Channel

Two students road trip home together for the holidays, but the car breaks down in an isolated place. An isolated place filled with ghosts, that want to haunt Emily Blunt’s character. That’s right, y’all. We have a Blunt sighting in the genre from way back in 2007! This is going to be a moment, and I hope it is a good one.

Three travelers stranded in the Outback hitch a ride with the wrong guy, and find themselves getting tortured. I am going to save this one for last because Australian horror is like Degrassi in that it goes there. I am a fragile soul right now, and I am not ready. I will be though, and I imagine the chaos will be worth the wait.

Wrong Turn is the first movie that comes to mind when I think of road trip horror, even though I have not seen it since I was a child. Plus Eliza Dushku is there, so it is worth the rental price.

The first few seasons really get you there, even though the majority of the run is also spent in the Impala. Plus, if you plan to watch The Winchesters, you might want to get a feel for the original series.

Hopefully, this list reminds you that we have plenty of road trip horror worth our time and attention. Or, maybe introduces you to one that is a new favorite. Either way, let me know at @misssharai.