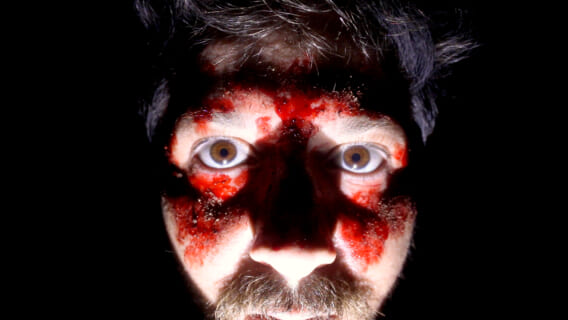 Robbie Banfitch’s directorial debut The Outwaters will change how you think about the found footage genre. His bloody and nightmarish take on the DIY filmmaking technique is bone-chilling and has drawn comparisons to the horror classic The Blair Witch Project. Following the release of the latest trailer, we were able to snag an exclusive interview with Banfitch about The Outwaters.

Memory cards unearthed in a remote stretch of the Mojave Desert tell the story of four travelers who vanished during a sun-drenched camping trip. One night, everything changes when the foursome is sent on a mind-bending voyage of unrelenting terror into a world of darkness that no human was ever meant to see.

Dread Central sat down with Banfitch to talk about the film’s new trailer, Real Housewives, sound design, and more.

The Outwaters comes exclusively to theaters on February 9, 2023 from Cinedigm and Bloody Disgusting.