Happy Birthday to this queen! 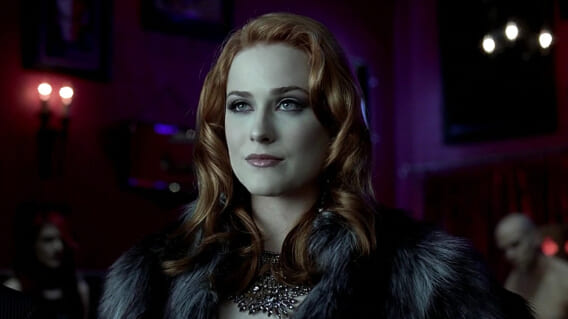 We all stan Evan Rachel Wood because she is iconic. Her career includes the most random stops in fantasy, sci-fi, and horror. This means most of us have seen her in so many things, that we just adopted her as one of us. Since it’s her birthday, we figured it was a good time to see just how many genre appearances she has made during her time on this planet. There are a couple of surprises on this list, including a few I never even heard of, but all of them prove Wood has been slowly building a genre legacy. Let us wish her a happy birthday, and check out some of these projects today!

When Mala’s planet is threatened by humans, she sets off on an adventure to save it. Not only does this animation look cute but I can also relate to humans ruining things. Other voices you might recognize are Mark Hamill, Rosanna Arquette, Chris Evans, Danny Glover, Beverly D’Angelo, Justin Long, Brian Cox, and Luke Wilson.

Two witch sisters clash with their small town as they live under a curse that puts a wrench in their romantic endeavors. Almost no one made it out of the 90s without seeing this movie. Let us not pretend we didn’t all want to be one of Sally Owens’s daughters. Mostly because she was played by Sandra Bullock. While we were dreaming about it, Evan Rachel Wood was living that Lilith Fair fantasy.

A filmmaker creates the perfect leading lady using AI but then gets jealous when she becomes more popular than him. It features a stacked cast with our queen Evan Rachel Wood playing the teen daughter/conscience of Al Pacino’s character. According to the internet, she even helps save the day when this computer persona gets out of control.

Two siblings have to fend for themselves in an isolated woodland home. The fact that none of you told me that Evan Rachel Wood and Elliot Page play siblings in a “Canadian apocalyptic independent drama” tells me that I have no friends. This movie is currently streaming on Showtime and is where I am starting today’s festivities.

A cleaning lady talks a teen into running away to live with her in secret. This psychological thriller sounds messed up, and I am intrigued by Wood getting to play the possible villain of this movie. She’s streaming on Prime, Tubi, Vudu, and some of the other free suspects, so adding that to my list of things to watch while parking my brain on autopilot later.

A small town is ruled by an evil sheriff with demonic powers. I’m going to miss those obvious jokes and tell you that Wood has three episodes somewhere in this one-season adventure. Also, Sarah Paulson is here doing weird shit long before American Horror Story.

A telepathic waitress finds herself in a world of sexy vampires and danger. Because it was mandatory for all the vampires and villains to be sexy, someone tapped Evan Rachel Wood when it was her turn to enter the chat as a chaotic bisexual Vampire Queen. She makes appearances from seasons two to four and is a fucking delight.

In a future where people with too much money and access, they can now create worlds where they don’t have consequences. I have not gotten around to this show, but I know that every photo that comes my way has Evan Rachel Wood serving badassery. Because it’s still going, it’s also a good way of keeping up with her current work if you’re into it.

Character: Evan the Immortal Princess of the Undead

A crew follows four vampires, and their familiar, on their ridiculous Staten Island adventures. Because we are all stan accounts for this show, we’ve probably all seen the episode “The Trial.” While we were laughing and squealing at the celebrity cameos from actors who have played vampires before, we also saw this rightful queen appear alongside the other infamous baddies.

Let me know if I missed any genre highlights on Evan Rachel Wood’s resume at @misssharai.