‘Benny Loves You’ is a Pitch-Perfect Horror Comedy [Watch]

Karl Holt’s tale of a killer stuffy is as endearing as it is hilarious! 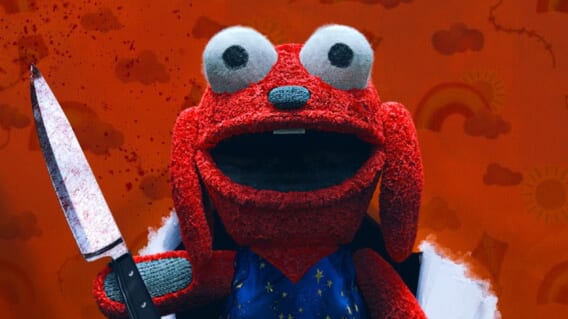 Allow me to start this edition of The Overlook Motel by saying that this week’s pick is a Dread release. Typically, we do not review anything from our distribution arm. With that said, this isn’t a review and no one asked me to speak to the numerous merits of the flick. However, I am a massive fan of Benny Loves You and am eager to spread the word about this darkly-comedic tale of pint-sized terror.

In the midst of planning a surprise party for their 35-year-old man-child, Jack’s (Karl Holt) parents succumb to a tragic accident. In the months following the untimely passing of his mother and father, Jack finds his career on life support and develops a new outlook on life. Accordingly, he makes the fateful decision to ‘act his age’ and throw out his toys, including his beloved stuffed companion, Benny. Per the prologue, we know that casting aside a stuffy will surely result in the inanimate object coming to life with a thirst for blood. Now, Benny is back and hell-bent on taking down Jack’s enemies. This proves to be a bit of a challenge when Jack must explain the trail of bodies in his wake.

Benny Loves You is sure to appeal to anyone fond of British humor. It is chock-full of wry, English wit. Case in point: The policemen that come to take Jack’s statement, after he reports that all of his stuffed animals have been beheaded, make themselves overly comfortable in his home and demand biscuits to accompany their tea. With each return trip, the officers of the law partake in more comedic misunderstandings and continue to aggressively demand they be supplied with biscuits.

Also adding to the film’s comedic credentials and overall appeal, Benny is used to tremendous effect. He is as psychotic as a Chucky doll. But he’s as cute as a button. How could something so innocent-looking be so deadly? Good question. However, the juxtaposition works brilliantly. Benny Loves You manages to separate itself from the majority of killer doll/toy films by eschewing the tendency to paint the homicidal entity as scary and imposing. No, Benny is just plain adorable, as are his motives for committing homicide. He simply wants to eliminate anyone that has wronged Jack as well as anyone attempting to come between the two of them. That somewhat unorthodox approach pays dividends, making the film both hilarious and heartwarming.

The way Benny saunters around Jack’s home, rocking back and forth, rather than walking, not unlike a South Park character, adds an additional layer of adorable to the proceedings. And the fact that the killer toy, while sentient, is limited to the prerecorded phrases he is programmed to recite leads to a number of hilarious, if sometimes predictable, exchanges.

In spite of skewing (tonally) more towards comedy than horror, the flick does not skimp on gore. The death sequences are goopy, visceral, and inventive. Benny is quite the artist. He takes great care to thoughtfully dismember his victims before posing them like a cat presenting its human with a dead-bird-gift.

Writer/director/star/cinematographer/composer Karl Holt plays remarkably well against his homicidal buddy, Benny. Holt takes great care to convey the humor inherent to the bizarre situations in which he finds himself but also manages to look awkward, uncomfortable, and slightly bemused. When stopping to consider that so many of his scenes are opposite an inanimate object and the fact that he was wearing all of the hats to get this picture made, it makes everything Holt has accomplished with Benny Loves You all the more impressive.

So, if you’re curious to check the flick out, it is streaming on Showtime as of the publication of this post. And if you’re a fan of under-seen cinema and keen to chat more, you can find me on Twitter: @FunWithHorror.