Richard Donner’s supernatural-horror film is an effective effort that deserves to be celebrated. 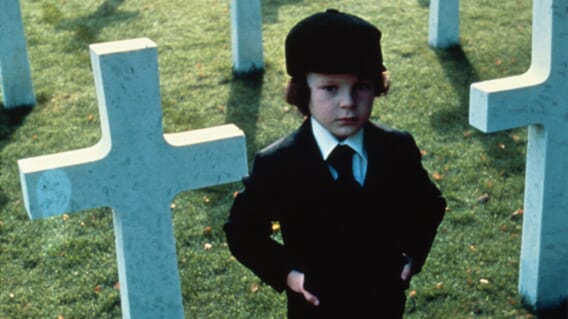 When executed effectively, supernatural-religious-horror has the potential to be supremely terrifying. The Exorcist and Rosemary’s Baby proved that notion beyond a shadow of a doubt. However, I find it a bit perplexing that so many people seem to look past The Omen when the discussion turns to sinister and effective supernatural-horror offerings.

The film is well-regarded by some film scholars and fans. But I can’t help but feel that The Omen is still a bit underrated. So, in observance of the picture’s release date anniversary on June 25th, I’d like to remind you why The Omen is a supremely terrifying effort that deserves greater acclaim.

The film catches up with Robert Thorn (Gregory Peck) as he is learns that he and his wife have lost their first-born child during labor. So, when presented with the opportunity to perform a trade for a child whose mother died giving birth, Robert agrees to the plan and keeps it from his wife, Katherine (Lee Remick). Everything goes smoothly at first. But eventually, violent coincidences begin to occur all around Damien (the changeling Robert and Katherine took home). As the evidence that something isn’t right continues to mount, Robert cannot shake the notion that he has made a terrible, deadly mistake. He ultimately comes to suspect that Damien may be The Antichrist prophesied in Biblical text.

The Omen works so well because of the gravity of the circumstances in which the Thorn family find themselves. Some of the picture’s most effective moments come from watching Robert and Katherine battling inner conflict about protecting their offspring at the expense of their own well-being. That makes for a terribly frightening premise. The mere thought of having to turn against your own child for self-preservation is jarring to anyone, especially to a parent. That is a situation with no easy solution and the film does a commendable job showcasing the turmoil Robert and Katherine feel as they begin to come to terms with the fact that their son may be dangerous.

The turmoil that Robert faces is easy enough to relate to. It’s clear that he is conflicted but he believed he was doing the right thing when he agreed to make the switch. Unlike a lot of inciting events in horror movies, Robert wasn’t being self-serving. And that makes the ordeal in which he finds himself all the more terrifying. The fact that the fresh hell he endures was brought on by  an attempt to protect his wife and help a child in need serves to make what follows even more sinister.

The unnerving narrative moves along at something of a slow burn pace to start. But director Richard Donner utilizes a haunting score and the foreshadowing of evil to come, along with unsettling camerawork and editing to establish the kind of atmosphere that keeps the viewer in a state of constant unease. The audience can tell things will escalate for the Thorn family. But it’s a gradual progression. The danger slowly builds, escalating to the point where the tension is almost unbearable. And from there, the action moves into a harrowing final act, which culminates in a terrifying denouement.

The sense of menace that Donner creates is further enhanced by solid performances across the board. But one, in particular, stands out. And that is young Harvey Stephens as Damien. Films like this live or die by their antagonist. So, if Damien wasn’t ominous and menacing, the viewer would have no reason to buy in. However, Stephens turns in an inspired performance as the malevolent tyke. His features, his facial expressions, and mannerisms all convey a sense of foreboding. He is ominous without having to say a great deal. And that goes a long way toward making The Omen as effective as it is.

Ultimately, The Omen is a superb supernatural horror feature that seems to live in the shadows of its more celebrated contemporaries. And while it may not be on the level of Rosemary’s Baby or The Exorcist, The Omen is, nonetheless, an effective and chilling affair that should be celebrated as a top notch supernatural-horror-thriller.