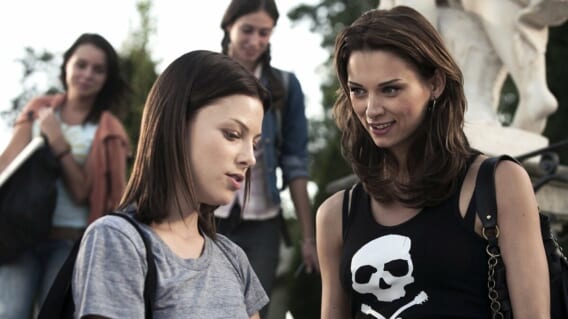 Eli Roth’s Hostel is a film that I have grown to like less with the passing of time. The central trio of friends featured in the first installment come across as obnoxious and grating. The first time I watched the flick, the novelty of the concept gave me the patience to tolerate the trifecta of bros at the heart of the story. But recent attempts to revisit have left me less than impressed. With that said, Hostel: Part II (which is celebrating a release date anniversary of June 8, 2007) has a lot more replay value. The 2007 follow-up effort uses the same basic template as its predecessor but features a cast of characters that give the audience more reason to invest. The protagonists in this second chapter come across as more accessible and less sophomoric. And that makes the entire film more palatable.

Hostel: Part II sees American students Beth (Lauren German), Lorna (Heather Matarazzo), and Whitney (Bijou Phillips) taking a scenic tour of Europe. When they meet a nude model that suggests a trip to a Slovakian hot spring is just what they need, the ladies change their itinerary and check in to a hostel. Little do the young women know, their new friend is actually luring them to Slovakia for the sole purpose of handing them over to Elite Hunting Club, a shady organization that allows people with more money than human decency to kill for sport.

I have struggled with the characters in a few Eli Roth films. But Hostel: Part II is one offering from Roth that subverted a lot of my expectations. The protagonists are accessible enough that I wouldn’t run the other way if I encountered one of them on the street. And that does a great deal to make this sequel a more enjoyable offering than its predecessor.

The most relatable of the central trio in this sequel is Lauren German as Beth. Beth comes from great wealth but is down-to-earth and approachable, in spite of coming from extreme privilege. She comes across as a loyal friend and as someone that cares about doing the right thing.

In addition to being likable, Beth is also a bit of a badass. And that becomes quite apparent in the third act when she goes from unsure of herself to boss level in mere moments. By thinking on her feet, Beth is able to effortlessly turn the tables and reverse the power dynamic in an unforgettable way. However, I will leave it there to avoid giving too much away.

Beth’s traveling companions, Whitney and Lorna can be a tad grating for different reasons. But neither is beyond the point of redemption because we never lose sight of their humanity. The primary problem I have with the 2005 original is that Paxton, Óli, and Josh are painted as stereotypical bros and never come across as particularly relatable. Life is a series of dick jokes and conquests to them and that makes the trio a tough sell as protagonists.

Aside from more likable characters, the other key difference between Hostel and Hostel: Part II is that the follow-up introduces the audience to some of the clientele of Elite Hunting Club. And that proves to be an effective strategy. We get to know Stuart and Todd on a human level. This time around, there isn’t as clear of a line drawn between the hunter and the hunted. Getting a closer look at the humanity of those characters works to remind the viewer that monsters come in all shapes and sizes. Additionally, the (sometimes) sympathetic portrayal of Stuart serves to make him almost relatable (until one stops to remember exactly why he is in Slovakia). And that adds an additional layer of depth that the first film was lacking.

Thanks to its more sympathetic and less abrasive central characters, Hostel: Part II stands as a more palatable, yet no less grotesque, offering than its predecessor.