"Get away from her, you bitch!" 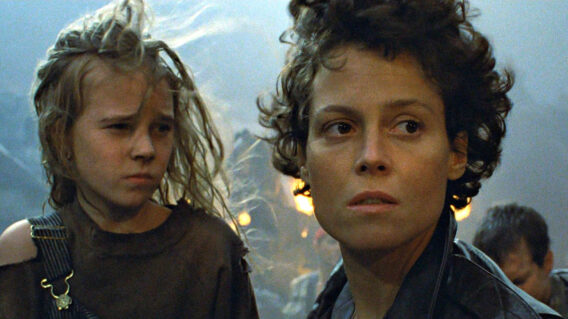 Aliens is widely regarded as one of the best action-horror films of all time. The sequel to Ridley Scott’s 1979 “Slasher In Space” classic, James Cameron’s bombastic film is larger and louder in nearly every possible way. The film again centers Ellen Ripley (Sigourney Weaver), the sole survivor of the Nostromo’s final voyage. But she is now bolstered by an ultra-masculine cohort of marines, sent on a “bug hunt” to find and destroy the alien threat. Rounding out the mission is Bishop (Lance Henriksen), a well-intentioned Artificial Person, and Burke (Paul Reiser), a representative of the Weyland-Yutani Corporation with devious motives behind a compassionate smile.

Within this complex cast of characters lies a fascinating exploration of the concept of motherhood and one hell of a final showdown. She assumes care for a Newt (Carrie Henn), a young girl orphaned by the creatures. Then, Ripley squares off against an Alien Queen also fighting for the lives of her children. The film concludes with an epic battle between two matriarchs, both determined to protect their young and the future of their species.

Also Read: Look At My Beautiful Son: An Ode to ‘Alien: Resurrection‘

Having put herself in stasis after defeating the alien who ravaged the Nostromo, Ellen Ripley is discovered drifting in space 57 years later. She awakens to a world that has moved on without her. The corporation denies the existence of the alien species all while quietly making plans to use it as a weapon. Planet LV-426 is now a colony and home to more than 60 families endangered by the lurking life force. Hoping for a payday, Burke surreptitiously exposes the colonists to the parasitic aliens. Then, he convinces Ripley to return to LV-426 in order to save them.

Once she arrives, she finds the entire colony has been wiped out and overrun with Xenomorphs. The sole survivor is Newt, a little girl who’s been hiding under the floor grating since her family was killed. Ripley becomes a mother figure to the child. So, she must protect her and the rest of her crew long enough to escape the doomed planet.

Aliens’ opening scene positions Ripley as a sleeping princess waiting to be rescued. But she spends the rest of the film subverting this stereotype. The second chapter of her story begins with a birth. While learning how long she’s been asleep, Ripley begins to spasm with the tell-tale signs of a chest burster’s emergence. The tiny alien tries to poke its way through her skin before she wakes up from the nightmare. Though it’s only a dream, this is the birth of Ripley’s responsibility to protect humanity from the alien species. As the only living person familiar with the deadly creatures, she has become an unwitting leader against an enemy with the potential to wipe out the human race and a matriarchal protector for the families now living on LV-426.

While preparing for the mission, Ripley delivers a lecture to a group of macho marines who are skeptical about any organism’s ability to harm them. She is soundly dismissed by the seasoned warriors and takes up a job operating a skeletal loader to keep herself busy. While exploring the deserted colony, she finds a new calling as a mother figure for Newt, the colony’s sole survivor. Everyone else treats the traumatized girl as a hostile witness. But Ripley wins her over by merely listening and treating her with kindness. Like Ripley, Newt is dubious of the soldier’s ability to protect her against the aliens and hesitant to trust them. These fears quickly come to fruition when most of the marines are wiped out in a single attack.

Having been right all along, Ripley’s insight is recast as invaluable and she becomes a crucial member of the team. Not only a mother to Newt, but now a matriarchal leader, she commands the troops based on her judgment and experience. Considering much of the first film’s tragedy could have been prevented had the Nostromo’s crew listened to her, this essentially unquestioned leadership feels like poetic justice.

Despite chemistry and mutual respect between Ripley and Corporal Hicks (Michael Biehn), the two never become romantically involved. But in caring for Newt, they form a nuclear family of sorts with Hicks assuming a paternalistic responsibility for the de facto mother and child. Though Hicks is cast in the role of strong protector, it is Ripley who saves the family unit. When Newt is taken to the alien lair, she is the one to insist they go back for her. She essentially carries a now injured Hicks into the dropship, then returns to rescue her child.

Also Read: ‘Alien’ TV Series Will Be Full Of Surprises But Not Ripley

Though Ripley begins the film as a kind of Sleeping Beauty, Hicks is the true damsel in distress. He must be woken up for the mission, dragged back to the ship, and sedated by the time the climactic action occurs. Following the tracking bracelet Hicks originally gave her for protection, Ripley becomes the paternalistic hero and assumes the mission alone. With her daughter on one hip and a massive gun on the other, she is the picture of a self-reliant protector. She’s perfectly capable of filling both the masculine and feminine roles of parentage while demolishing the line between them.

Having recovered Newt unharmed, Ripley finds herself holding the girl in the middle of a deadly patch of eggs. She looks up to see a giant variation of the Xenomorph, an Alien Queen responsible for hatching the facehuggers that devastated the colony. Ripley threatens these eggs with her flamethrower and the cautious mother signals safe passage to her alien minions. But as soon as Ripley clears the field, she goes back on her unspoken promise not to torch them. An opening egg signals the inevitable emergence of a facehugger and Ripley destroys them to prevent the spider-like creatures from impregnating anyone else. She destroys the eggs of the mother who threatened her own surrogate child.

Enraged, the Queen rips off her egg sack and follows Ripley on board the dropship. She’s determined to make Ripley pay for her betrayal. While Newt hides, Ripley dons the loader, making her equal in size and stature to the massive Queen. She delivers the iconic line, “Get away from her, you bitch.” explicitly feminizing the Queen and casting the battle as a showdown between two fierce mothers.

But what are the ethics of this battle in which two matriarchs fight for the future of their children? Ostensibly, the Queen allows Ripley to escape with her child, content to live and let live. But Ripley betrays this deal and attempts to wipe them out. One could argue that the aliens themselves are not to be trusted. They are a terrifying and parasitic species, their gestation and life dependent on the destruction of a host body.

But the same could be said for Ripley’s species as well. While raging at Burke’s own betrayal, Ripley notes that whatever harm the aliens cause, at least they don’t screw each other over in the name of capitalism. And the humans themselves are colonizers of an alien planet. LV-426 is not Queen’s original home. But had the humans not been attempting to expand their lifestyle throughout the galaxy, they might never have encountered the alien species in the first place. Who is the true parasite?

Also Read: ‘The Invasion’ Is Terrifying in its Alien Sensibilities [Rotten Outlook]

By casting Ripley so explicitly as a mother, Aliens poses an interesting question about the concept of cinematic maternity. Is Ripley’s motherhood reductive to a strong female character? The answer is both yes and no. An extended version of the film contains a scene in which we learn that Ripley did have a daughter named Amanda who died while Ripley was drifting through space. Having planned to return for Amanda’s 11th birthday, Ripley awakens to a picture of the now elderly woman and news that she died waiting for her mother. Weaver was reportedly furious at the deletion of this scene, believing it provides critical insight into Ripley’s motives. If Amanda exists, Ripley’s bond with Newt could be interpreted as a way of regaining the daughter she lost. Her nurturing tendencies make sense once we know that she is already a mother and used to interacting with a child.

Without Amanda, Ripley seems to be drawn to Newt simply because she identifies as a woman. This puts her in contrast with the more masculine female marines. It could be read as an idealized and prioritized depiction of femininity. Without an overt reason for Ripley to bond with Newt her actions feel stereotypical; simply motherly instincts that automatically kick in when a child is around. This is reinforced when Hicks, cautiously exploring a dangerous landscape, immediately calls for Ripley when he realizes they are in the presence of a child.

But Newt’s inclusion in the story, regardless of the existence of Amanda, informs the larger stakes of Ripley’s second mission. The first film focuses on Ripley as a variation of the final girl archetype. Though she cares for her crew, Ripley’s ultimate goal is survival and destruction of a single threat. The being she saves is the beloved cat Jonesy, a name itself evocative of a patriarchal status quo. But the second film definitely positions Ripley as a mother, making her responsible for the survival of others. Though she did not give birth to Newt, she takes it upon herself to rescue her. She returns to LV-426 because she feels compelled to save the families now threatened with alien exposure.

In the first film, her mission is to survive, whereas in the second film, she is explicitly called to protect. Newt becomes a representation of the future of the human race, a child who will hopefully go on to bear children of her own. By protecting the girl, Ripley is saving the potential for humanity to reproduce itself. Should the Alien Queen win, the powerful matriarch would propagate her own species, beginning a new plague of destructive birth throughout the galaxy.