‘The Invasion’ Is Terrifying in its Alien Sensibilities [Rotten Outlook]

The Nicole Kidman-led 'The Invasion' might be rotten online, but in retrospect, it's a chilling remake that deserves another look. 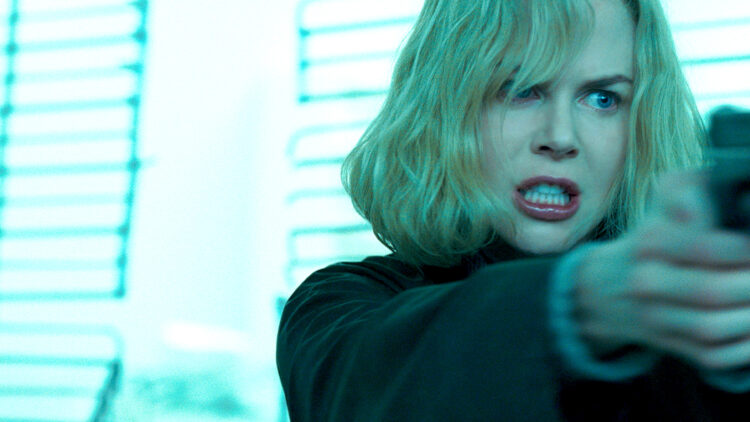 NICOLE KIDMAN stars as Carol in Warner Bros. PicturesÕ and Village Roadshow PicturesÕ suspense thriller ÒThe Invasion,Ó distributed by Warner Bros. Pictures. The film also stars Daniel Craig. PHOTOGRAPHS TO BE USED SOLELY FOR ADVERTISING, PROMOTION, PUBLICITY OR REVIEWS OF THIS SPECIFIC MOTION PICTURE AND TO REMAIN THE PROPERTY OF THE STUDIO. NOT FOR SALE OR REDISTRIBUTION.

Horror movies are, almost by their very nature, polarizing. It’s an expectation at this point that, beyond a microcosm of ostensibly elevated horror releases (whatever elevated horror even means), genre outputs are met with middling acclaim at best or outright condemnation at worst. Every time a horror movie transcends convention or interrogates an urgent sociopolitical theme, it’s heralded as breaking the mold. It’s myopic acclaim, praise for an approach the genre has had since its inception. Horror has always been influential, profound, provocative, and deeply political. Even its ostensibly rotten titles have something of value to say, whatever their critical reception might be.

Here, as before, we’ll be revisiting rotten horror movies that defy their Rotten Tomatoes score. Far from the best metric to measure a movie’s critical reception, it is nonetheless worthwhile in applying zeitgeist labels. In admittedly broad terms, it also helps establish a sense of what, at the time of release, critics thought of a movie. This time, we’ll be revisiting the third remake of Invasion of the Body Snatchers, the one that boasts a truncated title and a coifed yet no less furious Nicole Kidman.

Oliver Hirschbiegel’s The Invasion is currently sitting at a dismal 19% on Rotten Tomatoes. This is a score that amounts to almost overwhelming disdain. Reviews ranged from contentious, with Timeout remarking, “the invasion couldn’t come any sooner,” to outright sexist, with the Daily Telegraph remarking, “the only disturbing-looking thing here is what they’ve done to Nicole Kidman’s lips.” It’s, uh, not looking great for The Invasion. For the uninitiated, The Invasion is the fourth major cinematic adaptation of The Body Snatchers by Jack Finney. A perennial science fiction classic, the plot is essentially “scary space seeds turn people into pods.” In effect, the seeds duplicate human beings and produce a “pod person” rendition. This copy is a physical match that lacks any emotional drive.

It’s a terrifying concept that’s been exploited to great effect in the three antecedent adaptations. Philip Kaufman’s 1978 remake is widely considered one of the scariest movies ever made. Abel Ferrara’s 1993 remake, simply titled Body Snatchers, is a curious blend of arthouse sensibilities and gruesome body horror. Even Scream scribe Kevin Williamson wrote a quasi-adaptation of his own, with 1998’s The Faculty amounting to Finney’s novel reworked with Williamson’s signature nineties meta-swagger. A timeless story, every decade produces new events, catastrophes, and collective traumas that render it painfully relevant all over again. 2019 saw a remake of its own with the Andi Matichak led Assimilation, and it’s only a matter of time before another case of pod frenzy finds its way down the cinematic pipeline.

The Invasion is the most poorly received of the bunch. But I’d argue here that among the expansive cinematic landscape of Invasion-adaptations, it’s the second-best. Nicole Kidman, queen of wigs and wobbly accents, can truly do no wrong. Here, she delivers a genuinely urgent performance as a single mother among the first to notice something awry. A psychiatrist in the D.C. area, she notices it first among her patients. She then sees it among the reams of diplomats and high-flyers she regularly consorts with.

Hirschbiegel’s direction is excellent. Though at times it feels too visually beholden to David Fincher’s enduring “make everything stark and blue” mantra, it acutely portrays the nation’s capital as an alien land in its own right. As people suffer and die, politicians and lobbyists abide. They’re alien in both nature and disposition, extraterrestrial in their flagrant disregard for the wellbeing of their constituents. Wars rage on and entire nations collapse while those who yield the most power persist.

Admittedly, The Invasion never takes its thematic relevancy far enough. By the time it shifts into action-horror in its second act, it’s all but abandoned for jump scares, close calls, and subway station chases. It’s not ideal, though The Invasion at least has the decency to deliver on that front. Boasting an $80 million budget, the scares and set pieces here are big and brazen. There are home invasions (plenty of invasions here), tense tightrope walks as Kidman’s psychiatrist endeavors to trick the other pod persons, and even a bombastic, pyrotechnic car chase in a parking garage courtesy of reshoots from The Wachowskis. It’s thrilling, adrenaline-pumping stuff, the kind of sheer, unencumbered genre cinema we don’t get enough of today.

Forgotten to the annals of time, The Invasion is more than worth a weekend rental. It’s got hunky Daniel Craig, plenty of paranoia, and even some newfound resonance on account of the COVID-19 pandemic. Just as Kidman did in 2007, it’s easy to look around crowded public spaces today and wonder whether any given person wants you dead. Certifiably chilling, The Invasion is better than its critical reception would have you believe. Don’t follow the crowd. Don’t be a pod. Stream The Invasion.