Look At My Beautiful Son: An Ode to ‘Alien: Resurrection’

A face that only a mother, and I, could love. 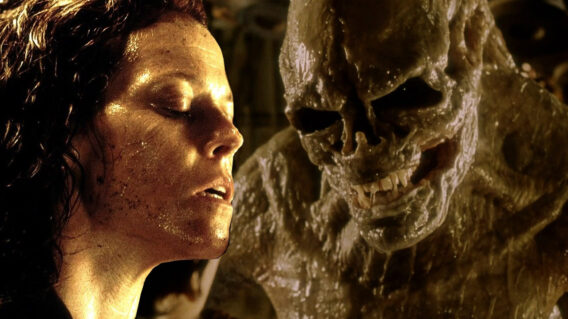 Happy Alien Day to those who celebrate! And to those who don’t, who hurt you? This is the day to celebrate Ridley Scott’s iconic Alien and its subsequent franchise. April 26th, or 4/26, is the chosen day because the first film takes place on a planet named LV-426. When celebrating Alien, many look for the first and second films to sing their praises as horror masterpieces. But one installment is unfairly left out of the discussion: Jean-Pierre Jeunet‘s Alien: Resurrection, the fourth film in the series.

Now, admittedly, Alien: Resurrection isn’t the same caliber as its predecessors. But that’s OK, because what it delivers is pure camp sci-fi featuring a Xenomorph-human hybrid, mad scientist Brad Dourif, a Ripley clone, a douchebag Ron Perlman, and one iconic basketball scene. Jeunet, known for horror-fantasy-sci-fi hybrids such as Delicatessen and The City of Lost Children, was the perfect choice for a film that really swung for the fences in terms of shaping the Alien canon.

For those unfamiliar, Alien: Resurrection takes place 200 years after franchise hero Ellen Ripley (Sigourney Weaver) sacrificed herself to save humanity from the Xenomorphs. But, as the word “resurrection” suggests, she is brought back to life. Sort of. To be precise, a clone of Ripley is brought to life. But she’s not totally Ripley. Her DNA has merged with a Xenomorph Queen’s after scientists implanted a Xenomorph embryo in Ripley. Yeah, it’s a little complicated. But essentially Ripley clone, or Ripley 8, has Xenomorph traits, which make her stronger and faster than the average human. Plus she can better sense the creatures.

These superhuman abilities lead to the iconic scene on a basketball court where Ripley makes a trick shot with her back turned to the net. She does this to show the boys, particularly Perlman’s Johner, that she’s not just another little girl they can boss around. Ripley sinking the shot wasn’t a camera trick, either. Weaver practiced with an actual NBA player to get the shot on her own.

Ripley’s physical prowess aside, there’s the entire scientific mucking about with genetics that delivers us, literally, my favorite part of Alien: Resurrection: Ripley’s beautiful alien son who is a literal nightmare to gaze upon. Thanks to the mad ravings of scientists like Dr. Jonathan Gedima (Dourif), they want to find ways to mix humans and xenomorphs. And, well, they do it.

The reveal of such a creature made me scream. For most of the film, Ripley has been reluctantly siding with mercenaries and an android named Annalee. She helps them find a way to escape the massive vessel that’s been overrun by Xenomorphs. But then Ripley stumbles into a lion den, which in this case is a Xenomorph next. Remember that weird DNA scrambling Gedima was doing? Well, it also affected a Xenomorph Queen who developed a uterus and is now in labor. Instead of her kind invading and perversely impregnating hosts, she herself is being ripped apart by her own child, her own chest buster of sorts. Alien has always been a metaphor for the horrors of birth, but now that metaphor is twisted even further.

This is horror’s most repulsive birthing scene and it is spectacular. Dourif is screaming “she’s giving birth for you, Ripley,” the Queen is hollowing in weirdly recognizable agony, and what bursts forth from her womb is a stunning accomplishment in practical effects.

Standing in afterbirth is a giant humanoid with a skull that is both human and alien. Somehow the artists were able to create something that is so obviously a xenomorph but still invokes a twinge of human recognition. It’s absolutely ridiculous and that’s why it’s camp; this climactic scene which is played very seriously is a parody of itself, and I mean that in the best way possible. It’s bizarre, it’s creepy, and typical sci-fi tropes are taken to the extreme.

On top of that is Ripley 8 petting her “offspring” because it recognizes her as its mother, not the Queen. They have a strangely intimate moment where they rub faces and Ripley almost moans at it. As if the creature was weird enough to look at, we then have a moment of intimacy between two hybrid beings who do feel a brief sense of connection. On the surface, it’s just plain off-putting. But on further reflection, there’s something even more fascinating about these two beings finding solace in their perceived monstrosity. Well, the creature is a monster, but still. It’s a closeness never before seen in the franchise. Xenomorphs snarl and snap in people’s faces, so this inversion of that iconic image is again off-putting.

While Ripley 8 kills her “baby” in an attempt to save humanity, she cries and mourns its depth as it screams in human-like agony. We’ve seen Ripley kill these things over and over. But this is the first time she’s shown experiencing overwhelming remorse for her actions. Again, it’s a bizarre and uncanny experience to watch this horror hero mourn the very things she’s promised to destroy.

Alien Resurrection may not be technically as good as the rest of the franchise, but there’s no denying its heart and daring. A Xenomorph gives birth instead of laying eggs. Our hero mourns the death of a monster. Our hero isn’t really even our hero! This is a film that subverted all expectations and while it may not have thrilled diehard fans, it proved that this type of creativity is possible within existing IP. So on this Alien Day, open a beer or grab your favorite edible, put on Alien Resurrection, and just vibe.